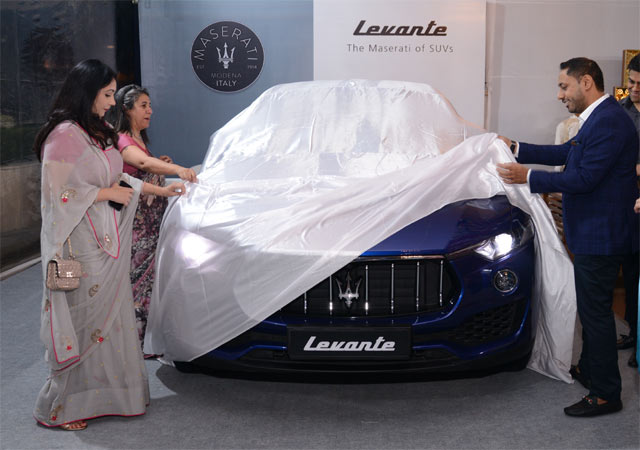 Maserati, the Italian luxury carmaker offered a sneak preview of the Levante – first ever SUV in its hundred-year history, in New Delhi at the  Royal Fables, a heritage platform that promotes regal, royal India in all its glory.

As the luxury partner for Season 9 of Royal Fables, the Maserati Levante made a debut appearance in the city where it was exhibited from October 5-7 at DLF Emporio. The exposition presents heritage inspired fashion, jewelry, automobile, art and lifestyle; typically everything that has a regal past but reproduced to fit contemporary life-styles.

Catching an exclusive glimpse of the Levante much before the launch, at the event that re-creates the ‘living room of the royals’, were the royal families and connoisseurs including Princess Diya Kumari of Jaipur, who graced the evening as the chief guest. The other eminent guests who attended the event include scions of royal families such HH Raja Randhir Singh & Princess Ria Singh of Patiala, HH Rani Vinita Singh of Patiala, Nawab Kazim Ali, Kumar Saheb Padmanabh Singh of Gondol, Princess Mriganka Singh of Jammu & Kashmir with Mr Nirvan Singh – scion of the erstwhile Patiala royal family, Yuvraj Vikramaditya Singh of Jammu & Kashmir and Mr Dhananjay Mahadik MP from Kolhapur.

The Levante will be officially launched in India in Q4 of 2017. As with many Maseratis from the past, the new car’s name is inspired by a wind: the Levante is a warm Mediterranean wind that can change from a light breeze to an irresistible natural force in an instant, mirroring the character of the first Maserati SUV.