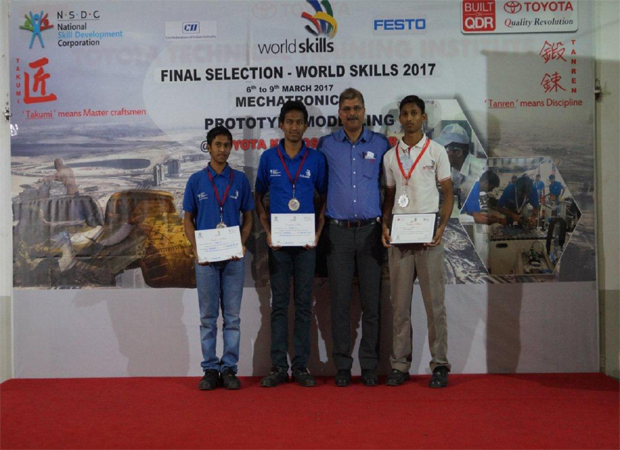 Toyota Kirloskar Motor (TKM) in continuation to its consistent efforts and performance at the World Skill Contest 2015 successfully completed the National level short listing of contestants in the “Prototype Modelling Skill” category for World Skill Contest 2017 to be held in Abu Dhabi in October this year. Acknowledging Toyota’s pioneering role in the Prototype Modelling Skill and the company’s notable performance at previous World Skill Competition 2015, National Skill Development Council (NSDC) chose Toyota to lead the category this year, from India. Under the guidance of NSDC, Toyota developed selection strategy and conducted the skill evaluation process at Toyota Technical Training Institute.

Candidates from across the country were invited to enroll through the official website of NSDC. Applicants then participated in an online examination covering wider topics ranging from technical, mathematics, drawing and aptitude to problem solving.  Based on the selection criteria, top three performers were shortlisted for the second level examination which tested the high practical skill levels. During the concluding selection stage, one Mr. Kiran – a TTTI candidate emerged as the final contestant passing through the stringent skill criteria, who will represent our country during the World Skill Competition 2017 in October. A guest contestant from Toyota Japan was also invited at the National level of the contest, to benchmark and assess the skill levels of the Indian contestants.

Commenting on the event and congratulating the winner, Mr. Sailesh Shetty – Vice President, Toyota Kirloskar Motor said, “We at Toyota feel delighted to have been entrusted the responsibility to lead the Prototype Modelling Skill category and select the contestants for the World Skill Contest 2017. We really appreciate the dedicated support and encouragement extended by NSDC.  At TKM, Skill development have been of utmost priority for us.  As a responsible organization, we at Toyota have been tirelessly working towards building a skilled workforce to cater to the needs of skilled manpower for India’s rapidly growing industrial sector. Toyota Technical Training Institute (TTTI) is also one such initiative that focuses on training and developing underprivileged students’ to become highly skilled manpower with greater career prospects in the automobile industry.”

It is a great honor for us that winning contestant who has been trained in TTTI is making the country proud at an international level” He further added.

The skill category of “Prototype Modelling” was introduced for the first time by Toyota Kirloskar Motor during the World Skill Competition held at Sao Paulo, Brazil in 2015. During the competition, a Toyota team member “Mr. Abhishek B.S” secured 4th position, winning a Medallion of Excellence award in Prototype Modelling.

World Skills Competition is the global hub for skills excellence and development through international cooperation and development between industry, government, organizations and institutions. World Skill Competition also called as “Skill Olympics” is an event held biennially in a member country or region which started in the year 1950.  More than 1200 Competitors from 74 countries and regions compete in 50 different skills. The competitors are all under the age of 22 years (except for four skills that have the age limit of 25).  It is considered to be the global meeting place for government, education, industry and association leaders to discuss relevant and important issues related to skills management.

As a part of its commitment towards developing world class skilled workforce for the emerging Indian Auto Industry, Toyota in 2007 established the Toyota Technical Training Institute (TTTI) which offers a three year rigorous full-time training in – Automobile Assembly, Automobile Paint, Automobile Weld and Mechatronics (a combination of mechanical and industrial electronics) to financially challenged students hailing from Below Poverty Line (BPL) families from across Karnataka. This institute exclusively emphasizes on over all development of the trainees as per industry requirements & towards “Perfecting people” and there by contributing young multi skilled, energetic, ideal students to the nation. Training Curriculum is a unique blend which focuses on the holistic development of Knowledge (16%), Skill (34%), Body and Mind (50%) of the students. Last year Toyota’s TTTI institute accomplished a key milestone of being selected for “Manufacturing Skill Transfer Promotion Programme” under the MoC signed by Ministry of Economy, Trade and Industry, Government of Japan (METI) and Ministry of Skill Development and Entrepreneurship Government of India (MSDE).

Additionally, Gurukul, is a well-equipped learning center at TKM which imparts diverse training to employees at all levels supporting them to improve their abilities and thoroughly fulfill their roles. Everyone who works at Toyota experiences 70% of their development through the job itself and the experience serves as a driving force in developing the next generation. Toyota has partnered with industrial and technical training institutes across India, to create the Toyota Technical Education Program (T-TEP) providing technical know-how training to ITI students across India along with hands on real time experience within Toyota dealerships. After a span of over 11 years, TTEP is now associated with 47 training institutes under the program, across India.