Toyota Kirloskar Motor Reiterates its Commitment to Hybridization in India 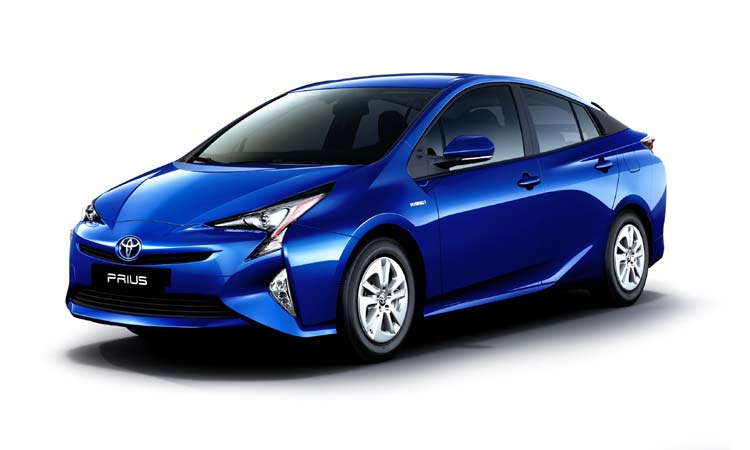 As Toyota Motor Corporation announces its achievement of selling more than 10.05 million hybrid vehicles globally, Toyota Kirloskar Motor reiterates its commitment to hybridization in India by announcing the launch of its two hybrid models- the new Camry Hybrid and the Hybrid Pioneer: All-new Toyota Prius. Toyota believes environment friendly vehicles can have a positive impact on the environment only if they are used widely and this can be further reiterated by Toyota’s feat of having more than 10 million happy hybrid vehicle customers across the globe.

To further reinforce its commitment to hybridization in the Indian market, Toyota Kirloskar Motor has launched the new Camry Hybrid and the all-new Prius which are both powered by the most advanced and eco- friendly Hybrid Synergy Drive: the world’s leading hybrid technology.

The Camry Hybrid is India’s first strong luxury hybrid. Also being the first and the only hybrid model to be manufactured in India, the Camry Hybrid has come a long way ever since its introduction in 2013 in India. The revolutionary hybrid technology, dynamic exterior, superlative comfort and uncompromising safety standard makes the new Camry hybrid futuristic on every count.

The new Camry Hybrid is equipped with Electronically- Controlled Continuously Variable Transmission producing a highly responsive performance and also reducing fuel consumption. The 2.5 L Engine with an electric motor produces a total system output of 205 PS. This advanced hybrid technology reduces fuel consumption and offers a mileage of 19.16 kmpl (as certified by test Agency under rule 115 of CMVR, 1989 under standard test conditions)

Safety is a high priority at Toyota and this reflects with the kind of safety features that have been offered in the new Camry Hybrid. The new hybrid now comes with best in class 9 SRS airbags including a driver knee bag, New Tyre Pressure Monitoring System (TPMS), New Back Guide Monitor, New Emergency Brake Signal, Impact absorbing vehicle body, rear seats complying with ISOFIX standard, vehicle stability control with Traction Control & Hill start assist control ensuring utmost safety for both the driver as well as passengers.

Exuding the true meaning of premium accompanied by convenience, the interiors of the new Camry Hybrid which has all been meticulously crafted with thoughtful controls, comfortable reclining rear seats now also comes with an all new Premium Audio with 12 JBL speakers, Navigation and an all new Wireless Smartphone charger (for compatible models).

The new Camry Hybrid is competitively priced at Rs. 31,98,500  (Ex- Showroom New Delhi). The Camry Hybrid also qualifies to receive a markdown of Rs. 70,000 in its price under the FAME (Faster Adoption & Manufacturing of Electric cars) scheme and the benefit is passed onto the customer
Hybrid Pioneer: The new Prius combines an all new Sporty design with enjoyable driving dynamics that defy conventional notions of an Eco car. Pioneer of Hybrid Technology, a modern day icon, the Prius is the first vehicle to be built on Toyota New Generation Architecture (TNGA). The TNGA platform means low-stance designs, giving the cars a lower centre of gravity than before, which in turn results in better suspension, stability and handling. TNGA and the latest in Toyota’s Hybrid technology blends the best of petrol engine and electric motor for a maximum efficiency of 26.27 kmpl with minimum emission.  The all-new Prius comes with a powerful 1.8 L petrol engine that delivers a superior torque making the new Prius a pleasure to drive.  As the pioneer of Hybrid Technology, Prius in India will be utilized to showcase the advanced technology and the Prius DNA which Toyota intends to carry forward in future. Priced at Rs. 38,96,040 (Ex-showroom New Delhi) the new Prius will be available in one grade- Z8.

The Prius which has close to 4 million happy customers across the globe was introduced in India in 2010 with an aim to not just create awareness about hybrid technology but also to reiterate Toyota’s commitment towards bringing in the latest in hybrid technology to India. It is with this underlying philosophy that we have launched the all-new Prius in India.

Speaking on the occasion, Mr. Akito Tachibana, Managing Director, Toyota Kirloskar Motor said, “India being a crucial market for us, we believe there is more to the market beyond just the numbers.  We have taken good stock of our priorities for the road ahead and we do not want to make just more vehicles but also want to address other critical issues associated with energy, environment and safety. With an aim to contribute to resolution of social issues and sustainable growth of an automobile based society, we believe that environment-friendly vehicles will go a long way to remedy this. And Implementation of environmental measures is one of the most important management goals of Toyota worldwide. It is based on the same principle that Toyota today has more than 10 million happy customers driving Toyota hybrids and we would like to thank our customers who have encouraged our efforts of hybridisation. We are actively working to promote strong hybrid technology and other environment friendly vehicles based on our stance that environment friendly vehicles can have a positive impact on the environment only if they are used widely”. Also speaking on the occasion, Mr. Akitoshi Takemura, Sr. Vice President, Toyota Kirloskar Motor said, “Camry Hybrid is the first and the only strong hybrid vehicle to be manufactured in India. The globally renowned Toyota Camry Hybrid has had a magnificent journey ever since its debut in 2013 in India. Embraced by people all over the world for its high level of QDR (Quality, Durability & Reliability), its identity as a vehicle with excellent ride comfort and quietness has become widely known and has established its unshakeable presence. This is further reiterated by the overwhelming response that the Toyota Camry has received as more than 95% of its sales in India can be attributed to the success of its hybrid version.  We are confident that the new and improved Camry Hybrid will further add to customer delight and help us spread awareness about the advantages of a strong hybrid technology. Here we would also like to thank the government who has encouraged our efforts to promote hybrid technology in India by introducing schemes like FAME-(Faster Adoption & Manufacturing of Electric cars) under which the Camry Hybrid qualifies to receive a markdown of Rs. 70,000 in its price which is passed onto the customer.”

“Prius was the first hybrid model to be launched by Toyota in India and ever since then we have come a long way.  The New Prius is an improvement keeping in mind the Prius DNA along with the FIRST ever introduction of TNGA in any Toyota Motor Corporation model. This together is the result obtained in the 4th Generation Prius. This continues to keep the Prius DNA intact which is “Always ahead of its times”. The new Prius is a glimpse of the future expected in Toyota Models”, continued Mr. Akitoshi Takemura.

Powered by the most advanced and eco-friendly Hybrid Synergy Drive, Toyota Hybrid cars are low on emissions and take their responsibility of building a sustainable future very seriously.