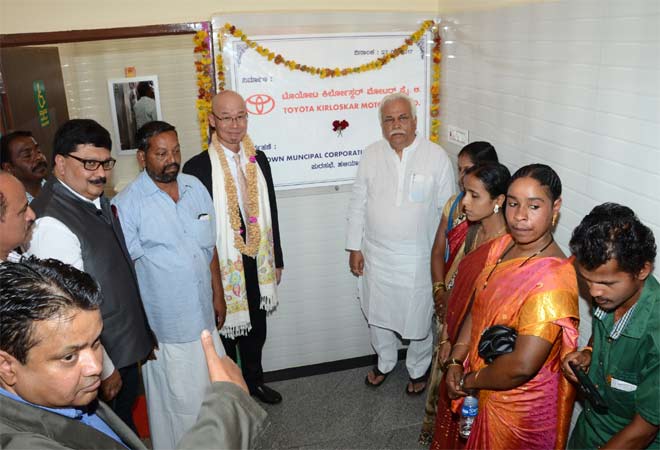 Open defecation is a serious social challenge in India. According to UNICEF Reports, one in 10 individuals’ practices open defecation, posing serious threat by making people susceptible to infectious diseases like Cholera, Typhoid, Hepatitis, Ascariasis and other Infections. Around 1,000 children below the age of five die every day in India from diarrhoea, hepatitis-causing pathogens and other sanitation-related diseases, according to the report of United Nations Children’s Fund.  According to Unicef, only five of the 30 districts in the state have satisfactory access to toilets while another three are average in the usage programme. The rest are below the minimum stated standards of toilet access and usage.Toyota Kirloskar Motor has pledged its active support under “Swacch Bharat Abhiyan” by building toilets in Schools, household, public places and educating community to use the toilets and not defecate in open. Additionally TKM has also initiated Project ABCD (A Behavioral Change Demonstration) to create awareness on importance of basic hygiene. More than 30,000 school children and 1 lakh village population have been trained on sanitation through this program and motivated to construct household toilets.

The sanitation units established by Toyota Kirloskar are located in 7 areas with 89 upscale toilets catering to public use including the physically challenged members of our society. Toyota has partnered with local government authority (Town Municipal Corporation) to construct, operate and maintain these sanitation units. The Karnataka State Government has aided this project by providing land, water & power to these sanitation units. These complexes are manned by trained attendants and have separate enclosures for men and women with necessary sanitary kits.

“Speaking at the event Mr. R.V Deshpande, Honorable Minister for Large & Medium Industries and Infrastructure Development – Government of Karnataka said “We appreciate the consistent efforts by Toyota Kirloskar Motor to enhance the sanitation facilities in Karnataka through their unique CSR initiatives across villages. About 85% of our population in Karnataka have toilet facility and we urge more such corporates to come forward to support this campaign. Proper sanitation facilities are imperative for the health & hygiene of the community.  In addition to the construction of sanitation projects, we also need to work towards changing the mindset of public by educating them on the importance of basics of sanitation and toilet hygiene where community leaders and village groups have a larger role to play. We will extend all required support to corporates for their dedicated and sustained programs to contribute towards Swacch Bharat.”

Speaking at the occasion and about the program Mr. Akito Tachibana, Managing Director, Toyota Kirloskar Motor said “Wherever we do business, it is our endeavor to strengthen the community we exist in. Our aim is to enrich the society with our CSR initiatives understanding and catering to the critical needs of the neighboring community. We are happy today to launch the Public sanitation facilities in North Karnataka. Good Sanitation facilities plays a great role in the socio- economic development of the country.  According to Unicef, only five of the 30 district in Karnataka have satisfactory access to toilets.”

As a responsible citizen, Toyota Kirloskar has been contributing to the cause of education, health, hygiene, road safety, environment and skill development across the country.

Till date, TKM has constructed more than 650 units of sanitation facilities in 206 government schools across India, of which 125 units are located in Varanasi, 426 units in Ramnagara district in Karnataka and 125 units in Vaishali in Bihar. In addition, TKM initiated the ABCD project with a focus on bringing in a behavioral change among school children. The project which mainly drives consciousness towards the use of toilets, begins from the grass root level by identifying gaps that exists in the sanitation facilities in rural Karnataka and tries to bridge the gap with a widespread awareness drive. Through unique children to parent approach the project has been able to create demand for household toilets through the children. More than 2300 household toilets constructed through this project. Toyota also installed incinerators (Napkin destroyers) in 15 government High schools in Ramanagara district. The project has also tremendously contributed in reduction of school hour missing cases (earlier condition- adult girl children used to go to their home for toilet usage and miss the classes (1-2 hours). Owing to the TKM’s girl child sanitation initiatives and ABCD project implementation school missing hours have reduced to zero –http://unicef.in/Whatwedo/11/Eliminate-Open-Defecation

By the year 2016-17, TKM has set a target of 40 villages to become open defecation free in Karnataka and has been already successful in ensuring 100% sanitation in 32 villages in Karnataka.

Tags:
Previous Article
Catch the digital premiere of ‘Rock On 2’ and Amazon Original, ‘Fleabag’ Season 1 only on Amazon Prime Video
Next Article
Rapper Raftaar and singer Anmol Mallik collaborate for a Bhabhiji single! 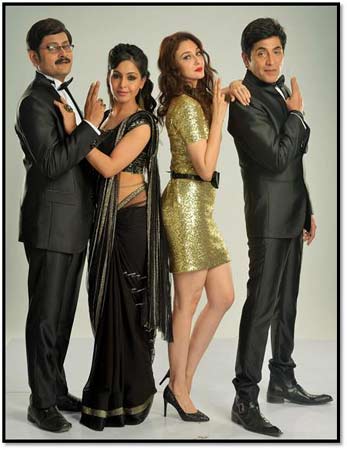