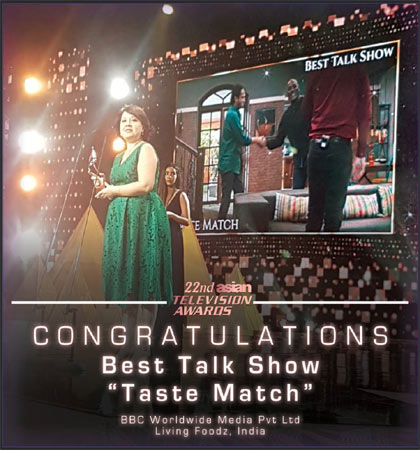 BBC Worldwide India has kicked off the last month of the year with 3 major awards wins, including a Gold at PromaxBDA Asia Awards held in Singapore last week.

The PromaxBDA Awards honours and celebrates outstanding achievements in entertainment marketing from around the world. The award leads the global community of those passionately engaged in the marketing, promotion and design of television and video content on all platforms.

The award haul was capped off at the 22nd Asian Television Awards when BBC Worldwide India took home the much-coveted trophy for ‘Best Talk Show’ for Taste Match.

Taste Match is an innovative homegrown format and beat some formidable competition.

This is the third year in a row that the Indian production team has brought home the Best Talk Show trophy at the Asian Television Awards. In the previous two years, Har Ghar Kuch Keta Hai(The House That Made Me) and Aaj Ki Raat Hai Zindagi (Tonight’s the Night) won for the team.

Stupid Man Smart Phone is India’s first ever digital survival series. The show introduces audiences to a never seen before format in the history of Indian entertainment where a smart phone and a super network is the only means of survival.