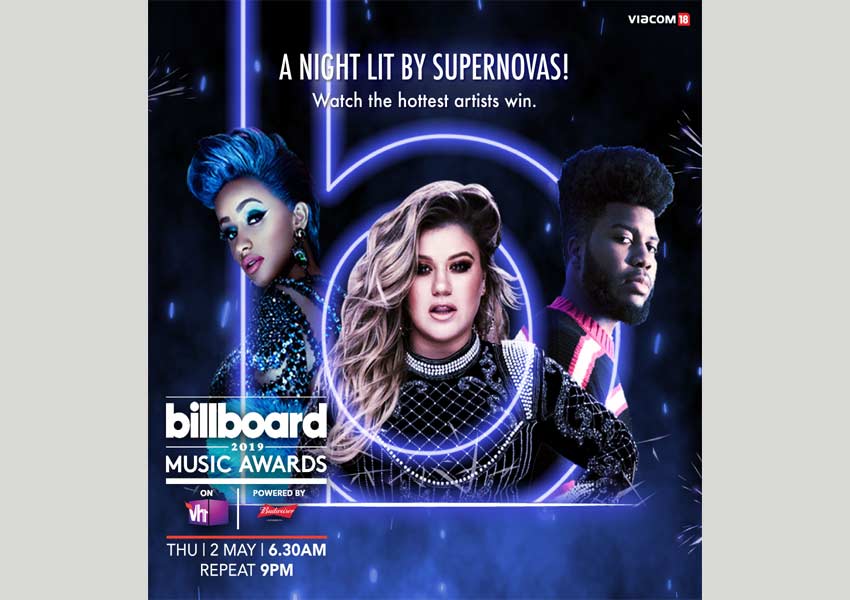 Get ready for the hottest night in musicat the 2019 Billboard Music Awards as it happens at the MGM Grand Garden Arena in Las Vegas, exclusively televised in India on Vh1. Bestowed upon by the Billboard, nominations for these prestigious awards are determined on the basis of sales of album & digital songs, streaming, radio airplay, tours and social engagement. Billboard chart-topper – Kelly Clarkson returns as host on Thursday May 2nd at 6:30am IST, with a repeat telecast at 9pm, exclusively on Vh1 India.

Leading the 25th edition of the awards is trend-setting artist Cardi B, with 21 nominations; including two nods in three of the 18 categories – Top Hot 100 Song, Top Selling Song and Top Collaboration. Also nominated for Top Female Artist and Top Touring Artist, Taylor Swift looks to break her own record for most wins by any artists, currently standing at 23 wins. Looking forward to the prestigious award night, Ariana Grande hopes to win her first Billboard Award with 9 nominations including Top Artist, Top Female Artist and for the second year in a row, Top Social Artist. Eager to surpass his current record of 13 wins in a single night, Drake has 17 nominations tying with Post Malone. Lady Gaga and Bradley Cooper are also nominated for the Billboard Chart Achievement Award.

“Home and heart to all English & International music in India, Vh1 has been showcasing the most prestigious awards &events for viewers. The 2019 Billboard Music Awards is a much-awaited and coveted night for artists and fansworld over rooting for their favorites to win. Keeping everyone on their toes, with a list of record-breaking nominees & performers such as Lady Gaga, Cardi B, Drake, Madonna, BTS, Taylor Swift& many more, the Billboard Music Awards will be a night to remember for all.” said Hashim Dsouza – Head of Programming, English Entertainment, Viacom18.

Making a spectacular debut at the Billboard Awards, Panic! At The Disco and Daigle take stage. The night will also witness the performance by Madonna with Maluma, as they bring the worldwide television debut of their single ‘Medellin’, and BTS performs with Halsey on their sensational single ‘Boy With Luv’. The pulsating performers for the night also include host Kelly Clarkson, Paula Abdul, Ariana Grande, Halsey, Ciara, Dan + Shay, Tori Kelly and Khalid. But the starry night doesn’t end there as the Jonas Brothers will perform for the first time in over a decade grooving to Sucker and Cool amongst other hit singles.

The 2019 Billboard Music Awards will also honour living legend and leader of the Billboard Hot 100 in 1990’s – Mariah Carey, who remains the only artist to top the chart in every year of any decade. With six of her albums claiming the No.1 spot at the Billboard 200 albums chart, a mega star in every sense, Mariah Carey will be conferred upon the prestigious ICON Award at this year’s awards.

Top Highlights from the 2019 Billboard Music Awards
MediaInfoline May 03