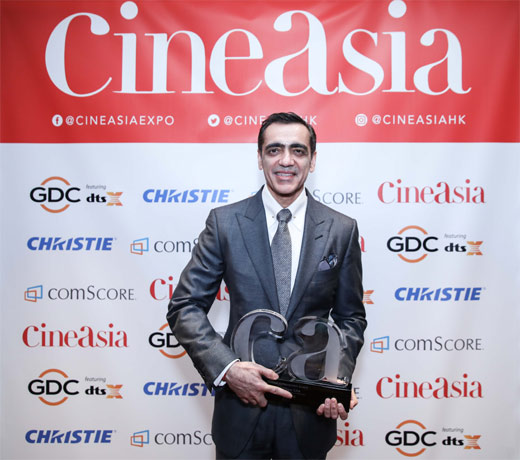 On receiving the award, Mr. Ajay Bijli, Chairman and Managing Director of PVR Limitedsaid, “I am happy and honored to receive the ‘Exhibitor of the Year’ Award. This award is special since it acknowledges our endless efforts to revolutionize the business of cinema viewing in India. I would like to say a big thank you to the CineAsia jury for recognizing the efforts put in by my entire team. I also want to thank Robert Sunshine and Andrew for creating this remarkable platform to share our experiences and network. A special thanks to Robert Kirby. We started the PVR journey together way back in the ‘90s. It’s not every day that you meet someone who understands and shares your vision. I am fortunate to receive the award from him.”

In 1995 Mr.Bijli started PVR Cinemas, the largest cinema exhibition chain in India today. The company began as a joint venture agreementwith Village Road show, a global film production and exhibition company of Australia, and within a few years the company established the multiplex format in India. Since its inception, PVR Limited has redefined the movie-going experience in the country. In 2012, the company acquired Cinemax and has taken over DT Cinemas in 2016.The brand currently serves approximately 75 million moviegoers and has 600 screens across India.

Mr. Bijli has received many prestigious awards over the past such as  the “Asia Innovator of the Year” award at India Business Leader Awards, 2016and Images Retail awarded him as the “Most Admired Retailer of the year 2016”. In addition to the these recognitions, Mr.Bijlihas also been honoured with eminent awards such as E&Y Entrepreneurial Award for Business Transformation, CNBC’s Emerging India Award and Most Admired Multiplex Professional by CMO Asia’s Multiplex Excellence Award. Under his leadership, PVR Limited has also received the Fortune India’s Next 500 Big and Mid-size company’s award.

Mr.Bijli is on the Board of Trustees of theMumbai Academy of the Moving Image (MAMI) and the founding member of FICCI Multiplex Association (India). He is also a member of The Film and TV Producers Guild (India), Young Presidents’ Organization and is associated with the Central Board of Film Certification, Government of India.