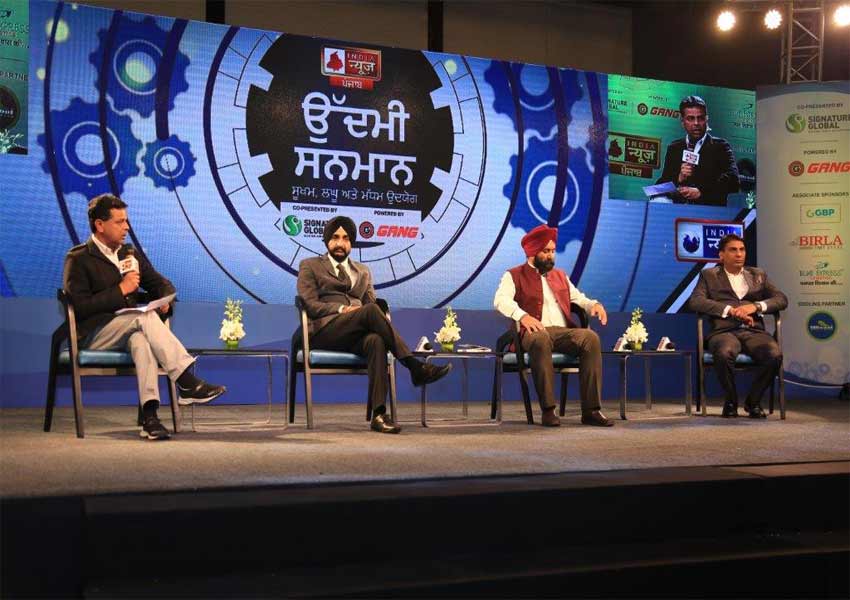 India News Punjab organized its ‘Uddyami Samman Awards’ in Punjab at Hotel JW Marriot, Chandigarh to honour the extraordinary contribution of MSMEs in the development of Punjab. The event was graced by Shri. Manpreet Singh Badal, Hon’ble Minister for Finance & Planning, Punjab.

The event witnessed three key sessions, which touched upon various key issues of the state, such as- Impact of Industrial Growth on Social Economic Development; Challenges before MSME in Punjab and an exclusive one-on-one session with the Finance Minister of Punjab, Shri. Manpreet Singh Badal.  During the event, Shri. Badal also felicitated the people from the business fraternity of Punjab with ‘Uddyami Samman Awards’.

During an exclusive one-on-one session with Shri. Manpreet Singh Badal Hon’ble Minister for Finance & Planning, Punjab, Shri. Badal said that “He will do everything to change the fate of Punjab”, on the issue of farmer’s loan, he said that “Farm loan waiver should not be considered as a populist scheme” On the issue of GST, he added that “Present GST structure is not feasible and there is a need to overhaul it, and Petrol, diesel & electricity should come under the GST.”

Another session on the Impact of Industrial Growth on Social Economic Development, the panellists were, Mr Daljit Sandhu, Additional Director Industries, Government of Punjab; Dr. Ranjeet Singh Ghuman, Professor of Economics, CRRID and Mr. Kamaljit Singh Mahal, Industrialist, where Dr. Ranjeet Singh Ghuman talked about the need to review economic policies and further mentioned that “There is a lack of skilled Punjabi youth in Punjab.”

The next session was on the Challenges before MSME in Punjab, which was led by, Mr D P S Kharbanda, Director – Industries & Commerce, Government of Punjab; Dr. Jatinder Singh, Asst. Professor of Economics, CRRID & Book Author; Mr Anupam Gupta, Director – Marketing, Gupta Builders & Promoters. The panellists discussed on the challenges faced by MSMEs in the state, where Dr. Jatinder Singh said that “The migrant workers in Punjab are not skilled”, and Mr. Anupam Gupta said that “Industries demand capital, so availability of credit is an issue.”