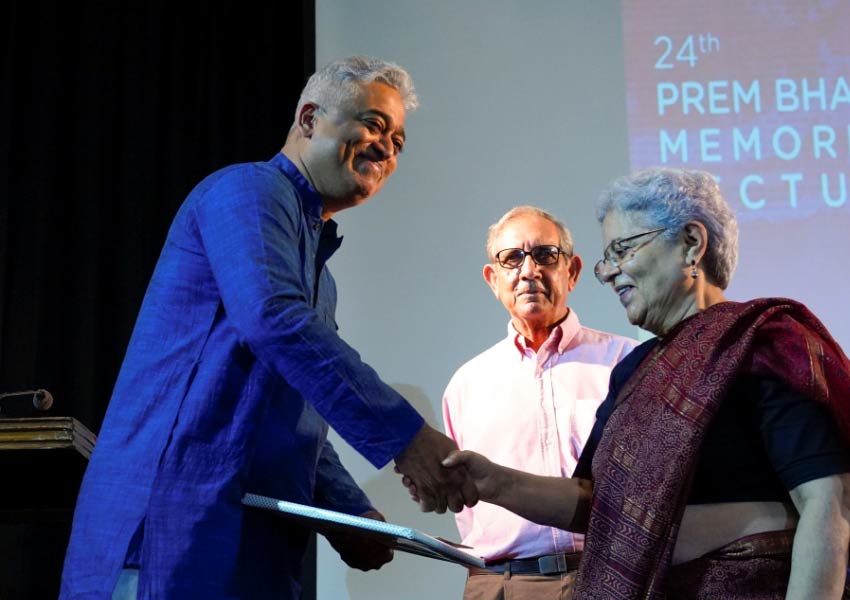 Rajdeep Sardesai, primetime news presenter and consulting editor at India Today TV, has been awarded the 2019 Prem Bhatia Award for Outstanding Political Reporting, in an event held by the Prem Bhatia Memorial Trust on Sunday, August 11th at the India International Centre in New Delhi.

The annual award, which carries a prize of Rs 2 lakh, was established in the memory of veteran journalist Prem Bhatia, who was well known for his political reporting and far sightedness. Every year, two awards are given to distinguished journalists in the fields of political and environmental reporting. The awards are decided by an independent jury, which is specially constituted for this purpose. The 2019 award for environmental reporting went to Down to Earth’s Ishan Kukreti and independent journalist Sharada Balasubramanian. Admiral Arun Prakash, former Chief of Naval Staff, delivered the annual lecture.

Mr. Rajdeep Sardesai is a senior journalist, author and news presenter who has reported on several groundbreaking stories in his eventful career spanning over three decades. Specialising in national politics, he has quite a few pivotal news breaks to his credit. During his stint with India Today Group, he has also authored two books- ‘Newsman: Tracking India in the Modi Era’ and ‘Democracy’s XI: The Great Indian Cricket Story’. He is known throughout the industry for his independence of judgment, unfaltering objectivity and analytical ability.

Mr. Sardesai has been the recipient of several awards for his seminal reporting in the past, including the Padma Shri (2008), the Ramnath Goenka award for Journalist of the Year (2007) and the International Broadcasters’ Award for his coverage of the 2002 Gujarat riots and many more.

With his unwavering wit and fierce intellect, he has spoken truth to power for many decades, and yesterday’s event has added one more feather to his cap, further cementing his role as one of the torchbearers of modern Indian journalism. On winning this prestigious honour, Rajdeep said “I am delighted to receive an award which is for, of, and by journalists and is widely regarded as one of the most credible awards in Indian journalism. The award is a recognition of not just an individual but of a wonderful team at India Today which worked tirelessly while offering the best election coverage of the 2019 general elections”.