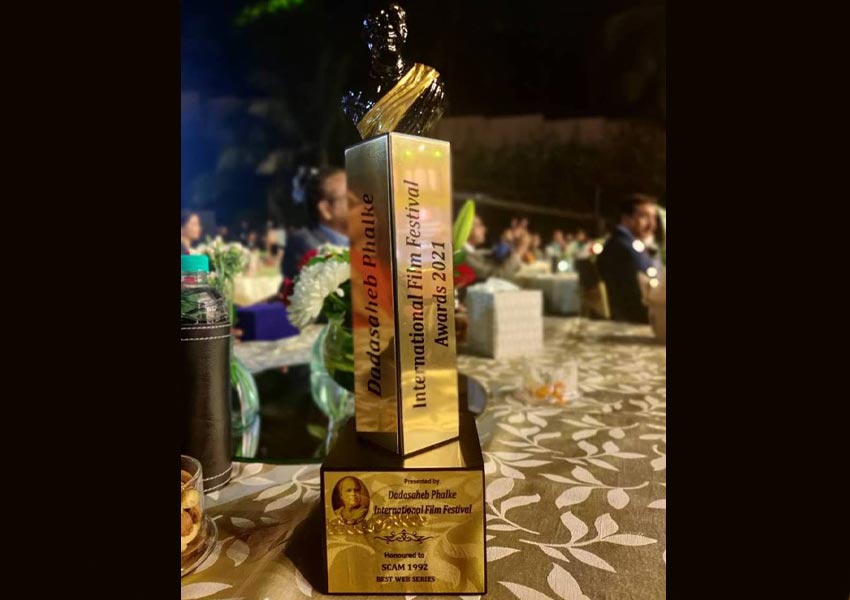 Scam 1992: The Harshad Mehta Story, produced by Applause Entertainment has won the Best Web Series 2020 at the Dadasaheb Phalke International Film Festival Awards 2021. The web series is based on the book “The Scam: Who Won, Who Lost, Who Got Away”, written by the renowned journalists Sucheta Dalal and Debashish Basu. The series has been winning hearts and many awards since its release. Scam 1992: The Harshad Mehta Story casts Pratik Gandhi and Shreya Dhanwathary on the lead roles playing Harshad Mehta and Sucheta Dalal, respectively. Apart from them, the cast also includes Hemant Kher, Anjali Barot, Jay Upadhyay, Chirag Vohra, Brinda Trivedi, Rajat Kapoor, Sharib Hashmi, Nikhil Dwivedi, Lalit Parimoo, Anant Mahadevan, K K Raina, and Satish Kaushik. The series is directed by Hansal Mehta, who has also won the National Award for direction and Screenplay for the Bollywood movie, Shahid.

The series captures the rise and fall of the flamboyant big bull of the stock market, Harshad Mehta. The series has been set in the early 90s. The story narrates how the financial journalist Sucheta Dalal exposed Harshad Mehta, behind the biggest scam of the nation.

Sameer Nair, CEO of Applause Entertainment commented, “It is humbling when a respected platform like Dadasaheb Phalke International Film Festival Awards has identified a show from the house of Applause and bestowed this honor upon it. Scam 1992- The Harshad Mehta Story involves a combination of efforts from the team’s Applause Entertainment, StudioNXT, SonyLIV, and the entire cast and crew. Our focus has been on telling stories that matter, creating content that defines genres, and unshackles promising talent. We are extremely grateful to our audience and the industry for appreciating our efforts. Recognition like this motivates us, even more, to continue creating content that is path-breaking and memorable.”

Dadasaheb Phalke International Film Festival Awards is the only independent award aimed at celebrating the legacy of the Father of Indian Cinema, Dadasaheb Phalke.