Vistara adjudged the ‘Most Passenger Friendly Airline’ at Wings India 2018 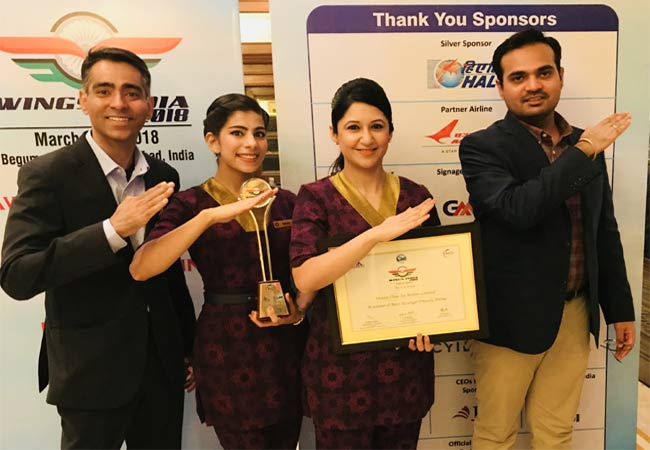 Vistara, India’s finest full service carrier, has been awarded ‘Most Passenger Friendly Airline’ at Wings India 2018, jointly organised by the Ministry of Civil Aviation, Government of India, Airports Authority of India and Federation of Indian Chambers of Commerce and Industry (FICCI), on the opening day of the four-day biennial international exhibition and conference on civil aviation held in Hyderabad. Global consulting firm, Deloitte, with its extensive exposure in the aviation sector, evaluated the award nominations and together with the organisers, adjudged Vistara as the undisputed winner in the category. Vistara also bagged another coveted award on the same day for ‘Best Airline – Service Standards’ by Pacific Area Travel Writers Association (PATWA) at ITB Berlin, the world’s leading travel and trade show. The jury comprising eminent members of the travel and hospitality industry, travel writers and mystery auditors have unanimously applauded Vistara for its service standards (in the Domestic category).

The award at Wings India 2018 was presented to Vistara by Mr. K.T. Rama Rao, Hon’ble Cabinet Minister for IT, Industries, MA & UD, NRI Affairs, and Mr. RN Choubey, Civil Aviation Secretary, Govt. of India. At ITB Berlin, Mr. K.J. Alphons, Hon’ble Minister of State for Tourism, Govt. of India, presented the award. Vistara dedicates all its laurels to its entire team, especially the cabin crew and other frontline staff, who often go beyond the call of duty to ensure millions of travellers truly cherish their flying experiences with the airline.

The two latest awards, just as those won by the airline in the past, attest Vistara’s continuous and relentless focus on ensuring unrivalled standards of service across all customer touchpoints as well as operations. With consistently immaculate service delivery by cabin crew and other customer-facing staff trained to the exacting standards of Tata and Singapore Airlines, Vistara has won over 8 million customers in a short span of three years. Furthermore, its brand new aircraft with cabin interiors that ooze of elegance and a fine-dining experience at 35,000 feet above the ground significantly add to the fine flying experience. Besides, the airline has redefined air travel in India with several industry first innovations in products and services on the back of its promise of being ‘intuitively thoughtful’.

The accolades come in tandem with multiple recent service differentiators that the airline introduced, such as the #VistaraWomanFlyer program that gained immense global recognition for assuring solo women customers that they will not be assigned a middle seat with Vistara, as well as the option of an arrival and local transportation assistance available on request. Among several other aspects, the airline is also the first in South Asia and Southeast Asia to serve Starbucks coffee on board and the first in India to have mood-lighting in calming hues of Vistara’s elegant brand colours on domestic flights on its A320neo aircraft.

As the highest-rated Indian airline on SkyTrax and TripAdvisor and winner of numerous “Best in Industry” awards, Vistara has raised the bar in many ways in the Indian aviation industry. Vistara today serves 22 destinations with over 730 flights a week, operated by a fleet of 19 Airbus A320 aircraft.