Watch the phenoms take stage at the 2018 American Music Awards 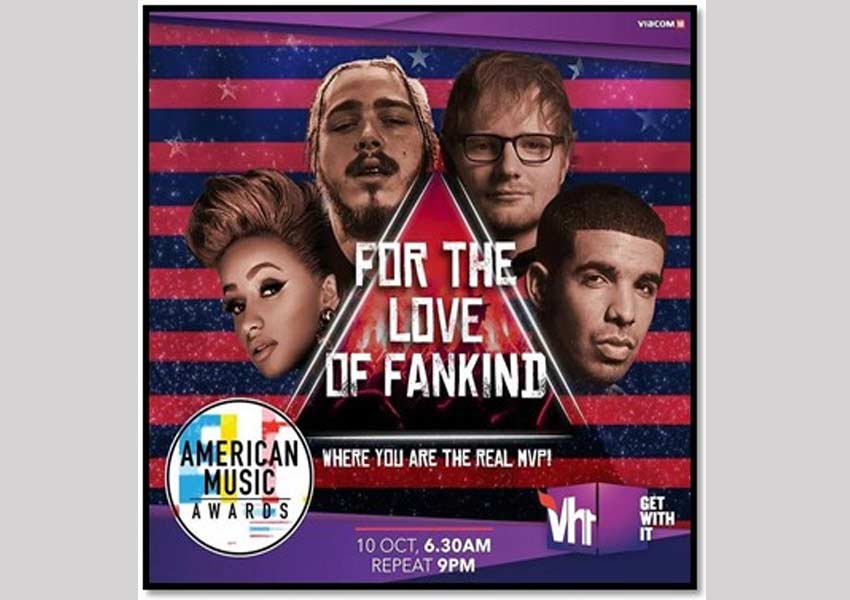 Celebrating and honoring music talent at the biggest stage, Vh1 brings to fans the 2018 American Music Awards from the Microsoft Theater in LA, California. Hosted by the versatile Tracey Ellis Ross, witness magical and captivating performances by pop icon Taylor Swift, break-out hip-hop star Post Malone & Ty Dolla $ign, along with some of the most eminent names in the music space including the likes of Cardi B, Benny Blanco, Halsey, Khalid and many more. After a pulsating week-long build-up to the coveted award revels, the telecast commences at 6:30am IST on Wednesday, October 10, followed by a repeat telecast at 9pm exclusively on Vh1.

Commenting on the telecast of 2018 edition, Hashim Dsouza – Head of Programming, English Entertainment, Viacom18 said, “Leading the pack by showcasing the best of international music and music-based events, Vh1 is dedicated to fulfilling the wishes and needs of its constantly-growing viewer base. The American Music Awards is one of the biggest award ceremonies in the world and we take immense pride at being the only channel that brings such monumental music events, making Vh1 the one-stop-shop for music enthusiasts.”

The American Music Awards honors artists in multiple musical genres, that are nominated based on key fan interactions, album & digital song sales, radio airplay, streaming, social activity and touring as tracked by Billboard. The categories include – Pop/Rock, Alternative Rock, Country, Rap/Hip-Hop, Soul/R&B, Adult Contemporary, Contemporary Inspirational, Latin, EDM and Soundtrack, alongside awards for New Artist of the Year, Collaboration of the Year, Tour of the Year, Video of the Year, Favorite Song and Artist of the Year.

Don’t miss this spectacle as superstars of the music industry take stage at the coveted 2018 American Music Awards, on Wednesday, October 10 at 6:30am IST and repeat telecast at 9pm exclusively only on Vh1.