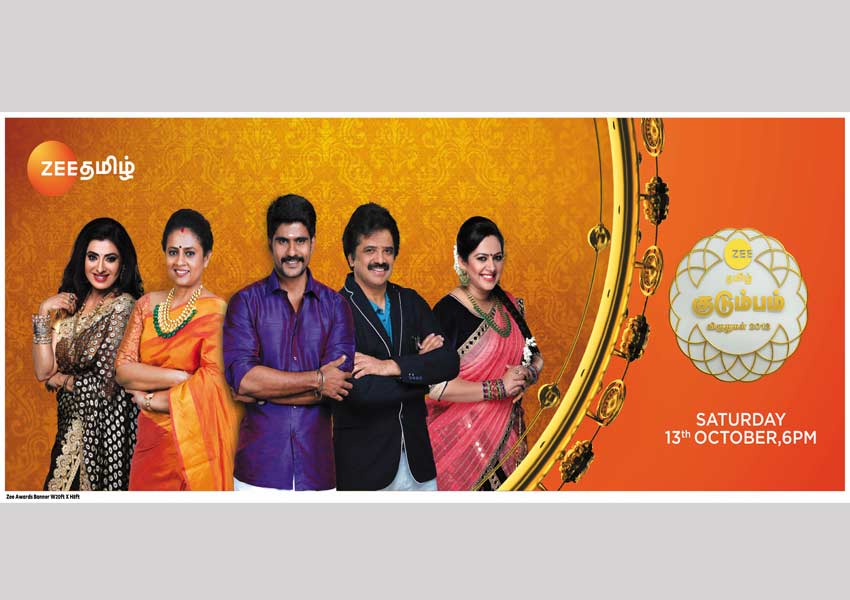 Zee Tamil Kutumbam Viruthugal aims to celebrate the 10-year journey of Zee Tamil in the General Entertainment Industry where the channel has set a benchmark with its distinct non-fiction shows such as Mr. & Mrs. Khiladies, Junior Superstars, Sa Re Ga Ma Pa & Dance Jodi Dance and novel fiction shows such as Sembaruthi, Yaarade Nee Mohini, Oru Oorla Oru Rajakumari and Poove Poochudava among others. The event will also witness the culmination of the Zee Tamil Kutumbam, as they join hands to honour and award its talent across various categories. The awards will be presented to the winners at an on-ground event scheduled to take place on 13th October 2018.

Speaking on the launch of the Kutumbam Viruthugal, Mr. Siju Prabhakaran, South Cluster Head – Zee Entertainment Enterprises Pvt. Ltd. said, “Over the last 10 years, the strength of Zee Tamil has been in its unique storytelling which encapsulates the ethos, culture and tradition of Tamil Nadu that Tamil audience cherish and hold close to their hearts. With the launch of Zee Tamil Kutumbam Viruthugal, we aim to present our viewers with new frontiers of entertainment as we welcome them to join us in this celebration of talent that has helped shape Zee Tamil as the preferred entertainment destination across all age groups.”

The winners will be chosen through a fair voting process that will allow viewers and fans to vote for their favourite stars by giving a missed call to the stars’ respective code numbers or by logging on to the Zee Tamil Kutumbam Viruthugal Microsite on the Zee5 App/Website.