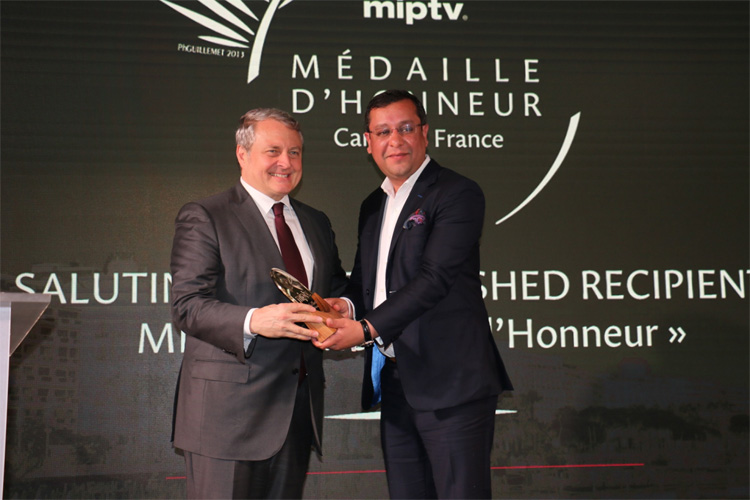 Punit Goenka and Amit Goenka, the top leaders of Zee Entertainment Enterprises Limited (ZEEL) have received the highest television honor at MIPTV – the Médaille d’Honneur Award. The award recognizes executives who have made an exceptional contribution to the international television business and who, through their talent, leadership and passion, continually drive the global TV industry forward. This is the first time any Indian broadcast executive has received the prestigious award. The awards were presented in Cannes, France at the Carlton Hotel during a black-tie gala, held on April 6, 2016. Amit Goenka, CEO – International Broadcast Business, ZEEL accepted the award from Paul Zilk, Reed MIDEM’s Chief Executive on behalf of both.

‘’The MIPTV Médaille d’Honneur is presented to industry leaders who have had a real impact on the international television business. Punit and Amit have taken Zee Entertainment Enterprises Limited worldwide, with ZEE channels now reaching a global audience of almost one billion viewers. Their vision for making ZEE one of the world’s leading global media conglomerates by 2020 is truly exciting and I hope MIPTV and MIPCOM help them achieve their goals,” said Paul Zilk, Reed MIDEM’s Chief Executive.

Punit Goenka, MD & CEO, Zee Entertainment Enterprises Limited (@punit_goenka) said: “We thank Reed Midem for this honor. We wouldn’t have been able to achieve this level of success without the continuous support and commitment of all our stakeholders that comprise the ZEE family. The Indian Media & Entertainment industry is going through a period of enormous change, boosted by key technology advancements and a conducive environment. As the industry witnesses a wave of digital disruption, we at ZEE are ready to lead the next phase of growth. Being content focused, we have diversified into new areas of content such as movie production, music publishing and theatre production.”

Amit Goenka, CEO-International Broadcast Business, ZEEL (@AmitGoenka) said: “ZEE is a major player on the global television landscape and we are honored to be recognized as the first Indian broadcaster to receive this prominent award. Today, we have gone beyond the South-Asian diaspora and are reaching out to local viewers globally. As a company our aim is to continually bring ZEE content to new audiences. Going ahead, we are focusing on Germany, APAC, Africa, Latin America, and the Middle East as key markets for expansion.”