Are you ready for the Ambi Pur Smelfie Challenge? 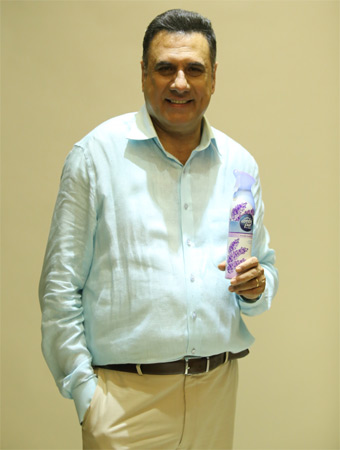 Ever wondered if your house has odours too? Or have you experienced an uncomfortable hint of smell in the air when you entered a friend’s house, which you could not ignore? Even the cleanest houses have odours, which is picked up by guests even if ignored by the residents. They can be obvious ones coming from trash or pet presence, or the other existent-but-ignored ones like stale food or soiled clothes; they can come from within the house, or spread from surrounding areas. The daily battle with these odours, which is especially heightened during the monsoon season, only gets more difficult if not acted upon immediately. It is not enough to just mask these odours by opening windows or using incense sticks. It is imperative to completely remove them. And to live up to this challenge of complete elimination of household odours, the funny man of the country Boman Irani, in association with Ambi Pur Air Effects, takes it on himself by launching the first of its kind ‘National Smelfie Challenge’.

Boman Irani, as the Brand Ambassador for Ambi Pur India, is inviting consumers to click ‘smelfies’ with what they consider the most difficult household odour to get rid of, and send it to the #Smelfie contest platform (http://bit.ly/2aFfXqb) during the contest duration of 15 days. With this very unique contest, lucky winners will stand a chance to get invites to an exclusive House Party being hosted by Boman Irani where, armed with Ambi Pur Air Effects, he will live up to the challenge and combat the toughest household odours brought in by the winners themselves.

Boman Irani is convinced of the efficacy of the product, as has been using Air effects to keep his house guest-ready by taking care of his household odours. Hence, he has taken this challenge upon himself on behalf of Ambi Pur. Boman is so confident of Ambi Pur emerging victorious against the toughest odours that he has also announced a forfeit in case Ambi Pur doesn’t live up to the challenge: he will change 100 diapers in a nursery!

Boman Irani, Brand Ambassador, Ambi Pur Air Effects added, ‘I have been using this product since even before I started endorsing it. I have realized that there is no shame in having household odours – everybody does! But I want people to understand that it is important to take steps to eliminate these odours. Ambi Pur Air Effects is the solution I swear by, to fight my household odours. Hence, I am challenging the country to share their worst odours with us, and Ambi Pur will eliminate them!  I want all households to go from ‘Smelly to Smiley’ with this very interesting ‘Smelfie contest’, and trust Ambi Pur like I do.”

According to an independent third party agency survey on Indian households supported by Ambi Pur, 94 percent* of Indian women agree that a great smelling house will always feel new. On the other side, 71% of Indian women agree that they are often irritated by odours within the household. Ambi Pur Air Effects can be your essential weapon to fight against your household odour as it does not just cover, but truly removes the odour, leaving a fresh-light scent which keep you and your house always guest ready.

So, take the ‘Smelfie’ challenge and join Boman at his house party.

Comedy Central and Vh1 are all set to make this Friendship’s Day more memorable!
MediaInfoline Aug 03