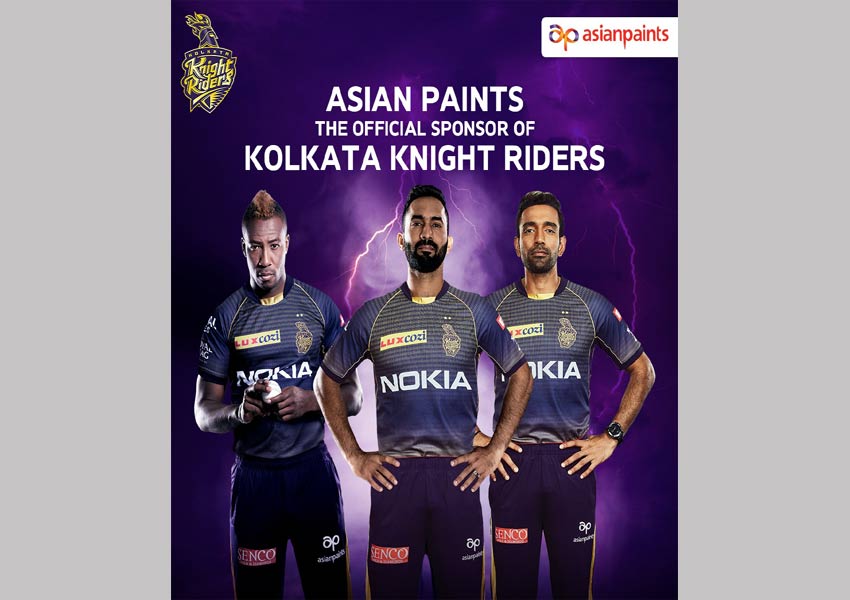 Asian Paints has announced their association as official sponsors for ‘Kolkata Knight Riders’ in addition to the continued association with IPL. In its 12th edition this year, IPL has successfully established itself as a premier and most watched T20 league across the world. Known for its high-quality cricket with best set of players and talent, Asian Paints focuses on enhancing the visibility and impact by associating with one of the world’s biggest sporting jamboree and the reputed KKR team.

With this association, Asian Paints will be omnipresent on-ground and on-air with high decibel activities planned for the network and consumers at large. The lead trouser sponsorship will help the brand cut through the clutter of multiple brand advertisements during the league & help garner brand saliency. In addition to this, Asian Paints is also facilitating two meet and greets for its key stakeholders with the players of the KKR team. With the people of East India being avid sport lovers, Asian Paints will leverage this association by having activities planned for the consumers, network of dealers, AIDs and contractors. During the AMJ quarter, this sponsorship is anticipated to generate a stable and sustained reach and visibility for the brand.

Commenting on the association, Amit Syngle, COO, Asian Paints Limited, said, “We are proud to be associated with IPL & Kolkata Knight Riders for the 12th IPL edition and are confident that this association will be a successful one. IPL continues to be a prestigious platform that has thrived over years, witnessing massive brand collaborations and visibility. KKR is considered to be one of the most coveted teams in the lucrative T20 tournament and this association is an added benefit for us to strengthen our connect with our consumers spread across the breadth of the country with a focus.”

Commenting on the association, Venky Mysore, MD & CEO, Kolkata Knight Riders, said, “It’s a pleasure to have a great brand like Asian Paints associate with us. At Knight Riders we like to work with credible brands who bring a lot of value to the partnership and with Asian Paints it’s yet another step in that direction.”