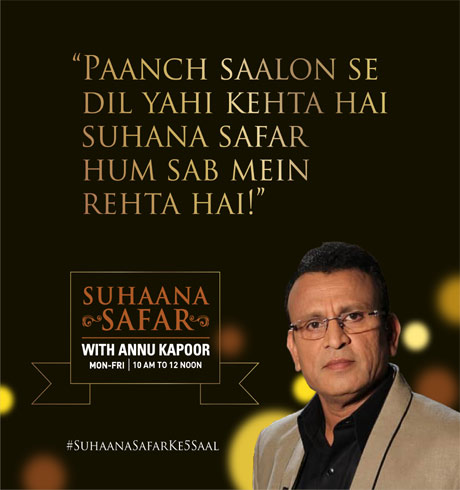 BIG FM achieved a new milestone as its longest running show, Suhaana Safar with Annu Kapoor completed 5 glorious years on June 24th. The show has broken its own records in becoming one of the most heard and loved shows in the history of radio. Raconteur Annu Kapoor, with his inimitable voice takes listeners through the by-lanes of Hindi cinema with the most riveting stories along with soulful music. His ingenious personality has gained immense credibility for the show which airs on all weekdays entertaining millions across the country.

Celebrating the occasion, the radio network hosted an FB live with the legendary icon himself who addressed his fans while reminiscing his remarkable journey so far. Interestingly, the live session garnered a massive reach in a short span of time receiving distinguished reactions by the audience. A special show was also conducted where Annu Kapoor was seen interacting with young budding singers sharing meaningful insights on the art of music. Adding to the engagement, BIG FM, throughout the week will also be conducting exciting contests.
Speaking on the occasion, a BIG FM spokesperson said, “Suhaana Safar With Annu Kapoor has received a wide acceptance since its inception, and is rated as the No. 1 radio show. Annu Kapoor’s profound knowledge and penchant towards Hindi cinema has led to its success and earned credibility amongst listeners. The show not only appeals to the mature generation, but is a huge attraction with youngsters as well. It is a moment of pride to witness Suhaana Safar With Annu Kapoor complete five great years, scale to such great heights and it is an honour to have a personality as incredible as Annu Kapoor to be a part of the BIG family.”
Commenting on the successful completion of 5 years, Annu Kapoor said, “I fall short of words to express how gratifying it is to see this show run so successfully and reach where it has reached today. It gives me great pleasure in bringing listeners closer to the world of cinema by narrating unheard anecdotes. It has been an exciting 5 years with BIG FM and our association has only strengthened over the years given that we share the same ideology to deliver excellent content to our music loving audience. My dedicated team of writers and researches have been instrumental in contributing to the show’s success. I hope to continue the legacy of the show and also engross the millennial generation in these enthralling tales.”