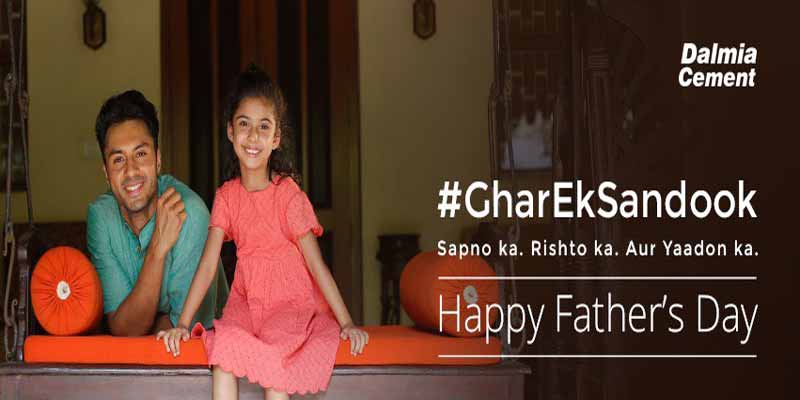 Dalmia Cement (Bharat) Limited, India’s leading cement manufacturer since 1939 today released an emotionally captivating social media campaign #GharEkSandook. The film celebrates the relationship of fathers with their children, as nurtured in the family home. More importantly, it celebrates the memories and future that’s built in the house; inspiring individual home builders to take pride in building their own homes- essentially, evoking pride in homeowners. Conceptualized by Kreativ Street, Dalmia Cement’s digital agency, and produced by Going Rogue Films, the film reinforces the brand’s ideology of – ‘DilJode, DeshJode’, with #GharEkSandook campaign.

The film takes you back in time as it beautifully unfolds a story of a son narrating memories of his father and recalling his childhood experiences. He relives the same memories now as a parent himself with his daughter, visualised in the same house. The strong bonds of familial surroundings, being augmented through fond memories and being replayed denotes the passage of time and yet, the feeling of protection, security, comfort of a house being personified through the imagery of a father stands out strongly; depicting the house as a treasure trove or custodian of dreams, relationships and moments captured in time through cherished memories.

Building further on the brand’s credo, ‘Building Bonds, Building India’  on a resonant occasion such as Father’s Day, the campaign invites the audience to reflect on how their house plays a role in nurturing bonds and subtly brings out the time-tested strength of ‘cemented’ memories being personified and nurtured through the house. Playing on the strength of cement, the film wants to drive a sense of security and durability for a product category that is usually seen as commodified.

Mr.Pramesh Arya, Executive Director, Marketing, Dalmia Cement, said, “Dalmia Cement has always been at the forefront of deepening ties with end consumers. Building a house is both a financial and emotional commitment to the owners’ family and with this campaign, we celebrate the role a home plays in shaping the future of our country. This is a tribute to all fathers who have helped nurture their children and foster strong ties with them over the years like DalmiaCement does by building strong homes. As a leader in reimagining the role cement plays in an individual’s life, this film is a celebration of family memories.”

Mostly, cement marketing and advertising focuses on the product, its functional attributes and end results- strength, setting time etc. This, both due to a low involvement category for end consumers, and technical specifications, is often seen as a universal category claim, available to all cement brands. Through connecting directly with Individual House Builders (IHBs), the film allows the brand to take a leadership stance, through celebrating the past and future of a family in their house.