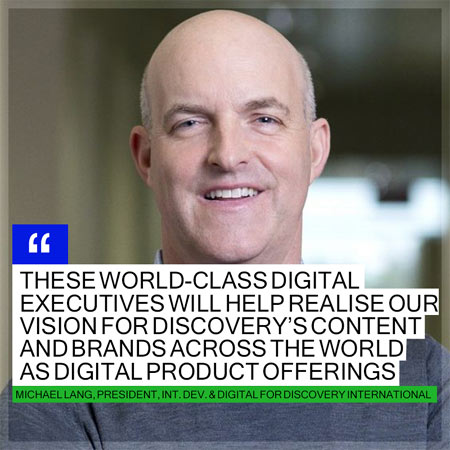 In his role as SVP, International Digital, Francis Keeling will be charged with creating new partnerships and business opportunities for Discovery to bring its content to consumers across every screen and service.  This includes an active role in Discovery’s OTT initiatives, including the recently announced digital video joint venture in Germany with market leader Pro Sieben.  Keeling also will help develop and launch new digital products tailored to meet the demands of Discovery’s superfans across numerous content genres.  He will be based in London.

Keeling was most recently the Global Head of Licensing at Spotify where he defined and implemented a new licensing strategy for the world’s leading digital music service.  Prior to Spotify, Keeling spent ten years at Universal Music Group, the world’s biggest record company where, as the Global Head of Digital, he managed the transition from physical music sales to new digital formats including digital downloads, streaming and subscriptions.

Lang said: “Francis is an outstanding digital executive who helped transform the music industry when its business model was disrupted by technological change.  He also comes to us from Spotify, a company we respect tremendously, with a proven track record of serving digital consumer needs.  We’re all excited that Francis is bringing these experiences and strong digital and consumer insights to Discovery.”

As Managing Director of Discovery’s new Digital Ventures Group based in Los Angeles, Jay Trinidad will focus on expanding Discovery’s brands and entertainment business into digital growth areas globally.  Trinidad spent a decade at Google as one of their early hires, working across advertising, search, strategy, operations and products including Chrome, rising to Head of Consumer Marketing for Asia Pacific.Trinidad will report into Lang for his new digital role, while continuing to report to Arthur Bastings, President & Managing Director, Discovery Networks Asia-Pacific with respect to his on-going Northern Asia responsibilities.

In addition, Eugene Huang has joined Discovery as the new SVP Product and Technology where he will develop Discovery’s international products and services across multiple platforms. Huang comes to Discovery most recently from American Express, where he was VP Strategy and Planning, developing innovative payment systems and digital commerce opportunities.  Prior to AMEX, Huang held several senior Government roles, including White House Fellow (President George W. Bush’s administration) and Chief Technology Officer,

Consumer Financial Protection Bureau for the US Department of Treasury (President Barack Obama’s administration).  He also served as Secretary of Technology for the State of Virginia (under Governor Mark Warner).  Along with Keeling, he will be based in London.

Mike Lang, President, International Development & Digital, commented on Huang’s hire: “Eugene brings exceptional tech leadership to our business which will be incredibly valuable as we develop some significant OTT initiatives across Europe.  Lang continued, “In partnership with the digital, creative and local leaders across our global organization, this senior team will help drive the digital agenda as we accelerate the pace of investment and transformation for Discovery.  Being able to attract world-class digital executives like Francis, Jay and Eugene into our business says a lot about our ambition as well as the opportunity they see for Discovery’s content and brands across the world as digital product offerings.”

Over the last year Discovery has accelerated its International digital activity significantly from its BAMTech Europe JV, double digit subscriber growth in its Eurosport Player streaming service, to the new OTT JV with Pro Sieben in Germany and the launch of Discovery and Eurosport channels with Amazon in the UK and most recently announced Eurosport on Amazon Germany.

Tags:
Previous Article
ASUS India announces Disha Patani as new brand ambassador
Next Article
TataCLiQ.com is here to ‘Cook the Look’ for you

TataCLiQ.com is here to ‘Cook the Look’ for you
MediaInfoline Sep 08