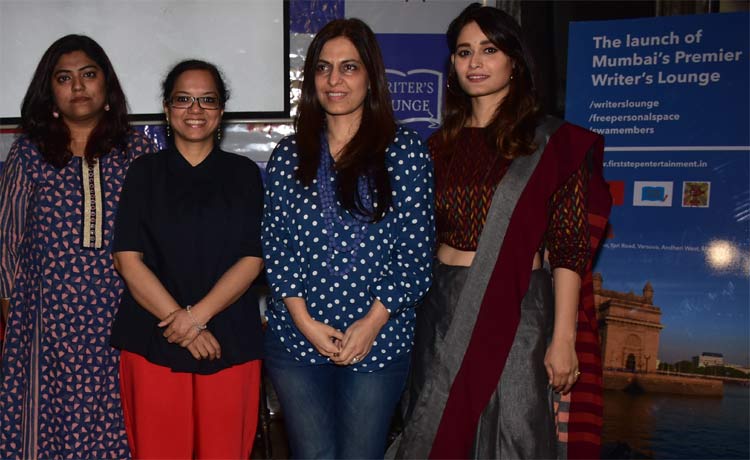 A good story is essential to make a film and, hence, writers are critical in the film making process. To consistently create some good stories, writers need a workspace that allows them to sit, think and pen-down their thoughts. The lack of such a space in Mumbai was noticed by Swati Semwal, Creative Head of First Step Entertainment Capital (FSEC). Being a writer herself of many notable short films, she created the FIRST-EVER-FREE co-working space called Writer’s Lounge. It is an inviting space that is located at the epicentre of Television and Films, Versova, Andheri West, Mumbai.

Writer’s Lounge does not levy any charges for using its space. Its aim is to fill a lacuna that exists due to space constraints in the city. It is available for writers of all ages, associated with Screenwriters Association (SWA), to come, sit and write. Talented writers are groomed in the company of senior writers and peers while they write freely without the fear of paying exorbitant rent.

Actor, director, writer Swati Semwal, the Creative Head of First Step Entertainment Capital, says, “The idea to start the space actually came to my mind while trying to meet my own needs of finding a suitable space to write. I came from Dehradun to Mumbai and soon realized that there was a need for a common place, where writers could collect, sit, write, exchange and bounce-off ideas amongst each other. This space should become the destination for production houses to come looking for budding writers with fresh ideas. We are helping them feel the ownership of their space. We hope Writer’s Lounge becomes a haven for all aspiring writers.”

Research indicated that though there were a few websites offering a virtual lounge offering support to writers to send in their stories or exchange ideas across the world, but there was no such facility on-ground in Mumbai. There is a need for a common place, where budding writers are groomed, and nurtured, in good company of senior writers and peers.

“All writers should have access to a place where their creativity flows easily to become strong narratives. Writer’s Lounge will ensure that all serious writers, who are members of the Screenwriters Association in India, are given a comfortable place and a peaceful environment to write their stories. It allows like-minded people to work under a common roof”; says National Award Winner, Juhi Chaturvedi.

The well-known Director-Writer of several films, Tanuja Chandra says, “Since the time we were young, we were highly encouraged to read and write and to be creative. Despite being into creative arts, it took me a while to write my first book because I found it very intimidating, since every word counts and affects the impact of the story. When I ventured into script writing and direction, Bollywood was largely a male dominated industry. I managed to make a mark. Today, as I see myself standing with my fellow writers, all women, I must say women have always had to move against the tide and they have come up as winners. I believe if you have talented and motivated people, they should be encouraged to work in a peaceful arena where creativity or efficiency is the highest priority. Here’s wishing Writer’s Lounge the very best to be a successful destination for writers.”

Writer’s Lounge is a community workspace that’s more than just a few desks, fast internet and free coffee. The team at First Step Entertainment Capital have been working hard at curating the ambience of the lounge and creating a workspace where the writers can just get their head down, and be focused and productive.

First Step Entertainment Capital’s vision is to support small budget Indie Cinema, and give creative people all they need to make their ‘First Break’ into films, be it in terms of a beautiful space like Writer’s Lounge to write their stories and in giving them all the facilities to make their stories a reality – as a short film, feature film or documentary and can also give them a platform, Net Pix Shorts to showcase their short films.

Do visit Writer’s Lounge and enjoy the neat and clean surroundings, with no maddening din to clutter the mind. With the availability of essentials like free community writing space, WiFi, Writer’s Lounge is the First Step towards bringing about a change in a writer’s life!.