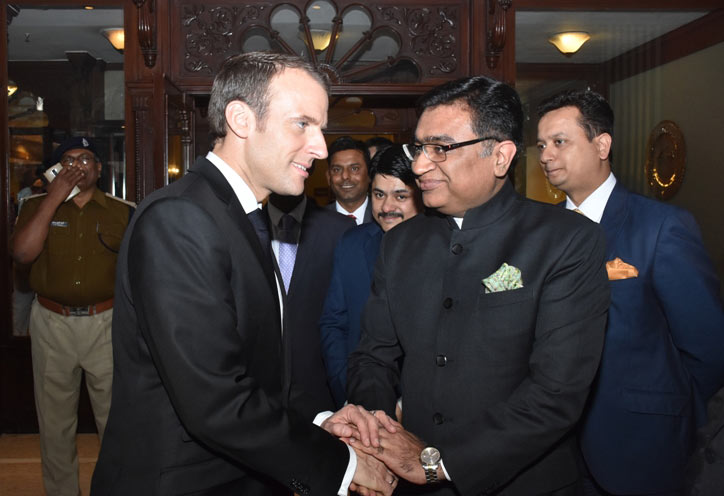 The iconic Taj Nadesar Palace, Varanasi was privileged to host the French President, Emmanuel Macron for a traditional Indian luncheon this afternoon. Accompanying him was Prime Minister Narendra Modi, the Indian Prime Minister along with several other Government dignitaries. President Macron, who is in India as part of a four day visit was delighted with the signature “Saatvik Thali”, meaning “food from the temples” served to him. The sumptuous vegetarian spread, sans onion and garlic was curated by the Taj Nadesar Palace to create a bespoke local experience for the visiting dignitary.

The luncheon was an apt reflection of the local culture and cuisine, including tender coconut water, jeera chaas,Palak Patta Chaat, Aloo Dum Banarasi, Benarasi Kadhi Pakora,  and Baingan Kalounjialong with several other options. Desserts such as Gajar Ka Halwa and Kesariya Rasmalai topped it all off with of course the quintessential Benarasi paan.

Built in 1835 by James Prinsep for the then British residents, the palace eventually became the abode of the Benaras royal family and is named after Goddess Nadesari, the consort of Shiva.  Taj Nadesar Palace has been synonymous with royalties and celebrated statesmen since 1835 and has played host to various legendary personalities such asPrince and Princess of Wales, who later became King George V and Queen Mary, Queen Elizabeth II ,King Ibn Saud of Saudi Arabia, Lord Mountbatten, Jawaharlal Nehru and His Holiness Dalai Lama.

Tags:
Previous Article
Meet the Pearsons one last time in This Is Us season 2 finale on Star World
Next Article
‘Shameless’ makes its Indian Television debut with Romedy Now