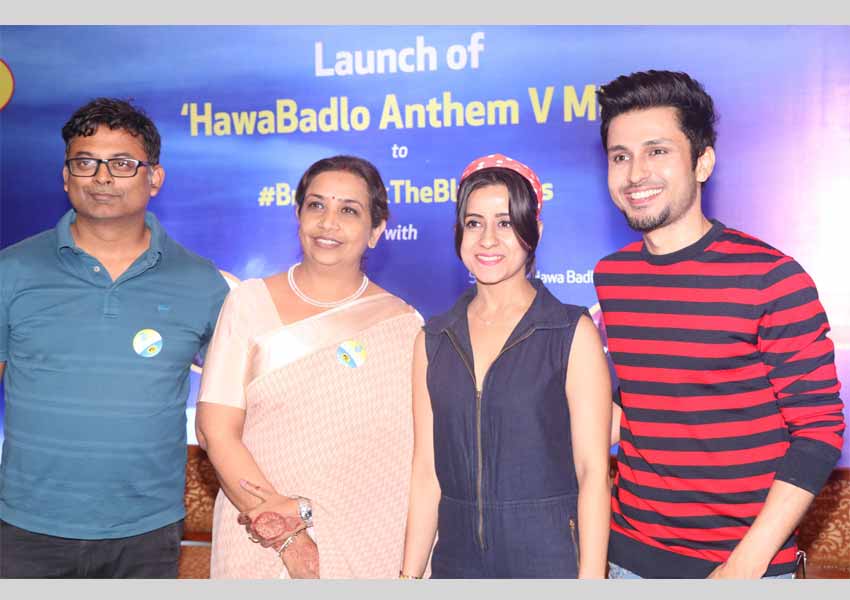 The press conference also witnessed the commencement of #BringBackTheBlueSkies, a campaign dedicated to ‘Turn Back time to better environments and bluer skies that we were once used to’, through perceptible action, change in our lifestyle choices and behaviour towards the environment.

According to a CSE Report Air Pollution is one of the biggest killer that is responsible for thousands of death every year and GAIL has been instrumental in putting up a fight against pollution, educating the masses on the malice of air- pollution and how it affects people.

In light of this alarming situation, GAIL has been supporting Hawa Badlo, an independent people’s movement started more than two years ago, aimed at propagating sustainable mind-set change at individual level, which collectively establishes an extensive community change for greener and cleaner tomorrow for us and generations to come.

Amol Parashar, the star of web series like Home and Tripling, addressing the Press Conference said, “Not only is this a very exciting project for me but also gives me a chance to connect with the youth of the country for a noble cause. I also am glad I got to experiment with my look, and play a much older man for the first time! Hawa Badlo is a signature social media movement against the havoc of air pollution and I am excited and very happy to be a part of this initiative.”

Sarah Hashmi, of Dil Dhadakne Do and Happy Phir Bhaag Jayegi fame, while addressing the press conference said, “This campaign is timely, necessary and pointing to the young changemakers to recognize this fatal menace called Air Pollution. Was surprised to learn how many people are losing their lives to it every year. I am happy to get a chance to be a part of this video with Amol and hope that it will be useful in creating the requisite connect with the youth through social media platforms.”

The new video called TURN BACK TIME – Hawa Badlo V Mix – is produced by HANDYYMAN and has been co-written by Tanvir Ghazi (Pink) and Protiqe Mojoomdar (Halkaa, I am Kalam, Ishqeria) and the music is by Bishakh Jyoti.

Nalini Malhotra, General Manager (Corporate Communication) GAIL (India) Limited said, “The new HawaBadlo musical video is targeted at the masses and youngsters who are being asked to bring about change in the air by their respective efforts. The campaign is in line with GAIL’s commitment to improve the air quality with collective societal effort.” she further added, “Through this music video we kick start our campaign #BringBackTheBlueSkies which intends to inspire masses & youngsters to take positive steps against air pollution, a global killer and to bring about change in lifestyle and adopt nature friendly fuels like natural gas in our daily lives.”

The ‘Hawa Badlo’ Campaign is supported by GAIL and has been instrumental in involving citizens to bring about small but meaningful changes in their lives to fight the menace of pollution. The cases of chronic obstructive lung disease have almost doubled over the past 25 years, causing seven million deaths annually across the world, of which 3.8 million deaths are caused by household or indoor air pollution. The ‘Hawa Badlo’ campaign is thus the need of the hour and in many ways supports our Government’s Swachh Bharat Mission and its effort towards Natural Gas based economy.

Protiqe Mojoomdar, Co Founder & Producer, Handyyman said, “It’s a matter of great pride for us to be a part of this award-winning campaign, and it’s the one year anniversary for us and the Hawa Badlo anthem! We are excited at the launch of this new video, which is a part of the effort to make Hawa Badlo more relevant, contemporary and a youth movement for essential change. This time, we have added a touch of romance and the hope for a happy utopic future to the video; it’s the same song but with a new arrangement that the young audience will like. So let’s spread this and together, let’s Bring Back The Blue Skies!”.