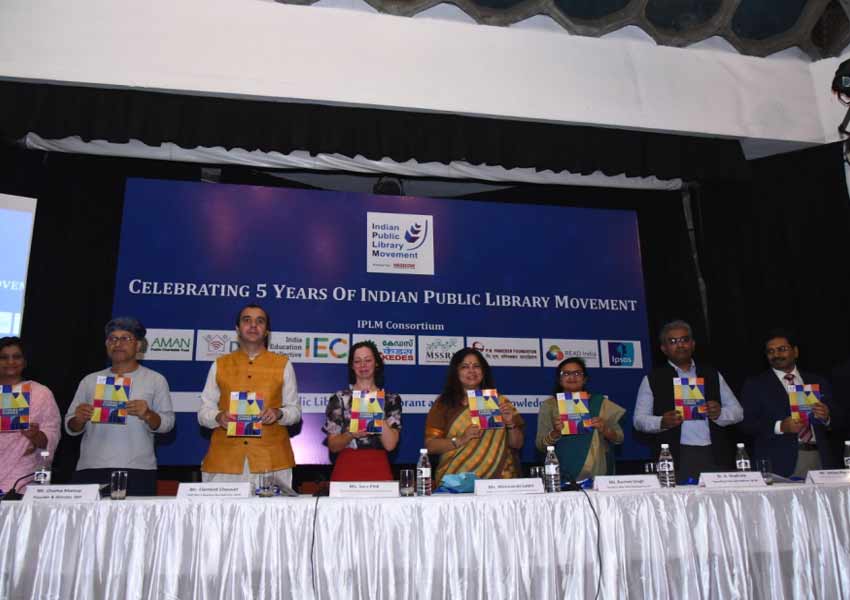 On the occasion of fifth anniversary of Indian Public Library Movement (IPLM) hosted by NASSCOM Foundation celebrated the untiring efforts in rejuvenating public libraries and empowering communities with value added knowledge, information and services, at C.D. Deshmukh Auditorium, India International Centre (IIC). The occasion was marked by the presence of Mrs. Meenakshi Lekhi, Member of Parliament, (Lok Sabha). The occasion also witnessed the exchange of MOU between United Nation Development Programme (UNDP) and IPLM for a new partnership unfolding between public libraries and the domain of skill in Maharashtra.

IPLM’s intervention has rejuvenated public libraries as new age knowledge and keeping this in mind IPLM also released a booklet, ‘Stories of Change: Impacting Lives through Public Libraries’ the 20 short stories talks about how public libraries and the librarians have influenced the lives of different people through various IPLM initiatives.

Indian Public Library Movement which started from 5 years ago from 2 states in 9 libraries and 4 partners, is now spread across 20 plus states in 100 plus districts and 200 plus public libraries directly and hundreds of other libraries in the form of participation, communication & continuous engagement on different occasions at different levels.

Chief Guest for the event Ms. Meenakshi Lekhi, Member of Parliament said “I am what I am because of the library. Libraries does not distinguish between people, whether rich or poor, boy or girl it imparts knowledge to everyone. It helps in building personality, making life easier and communities a better place to live in”.

The occasion also witnessed launch of short film on Technology Empowering Girls (TEG) an initiative by IPLM that utilises public libraries as a platform to bridge gender based technology gap by digitally empowering adolescent girls and women from marginalized communities in urban, semi-urban and rural India.

Ms. Rashmi Singh, Secretary, NDMC speaking during the occasion said “Not just public libraries but we should also look forward to convert school libraries from just textbook knowledge provider to digital platform and knowledge sharing centers. We value your work of providing soft skill training to adolescent girls and women and making their lives better”.

Addressing the dignitaries and the audience Mr.Shrikant Sinha, Chief Executive Officer, NASSCOM Foundation said “Library is storehouse of knowledge and today with our combined efforts they have become a place for knowledge sharing and community building. This would not have been possible without librarians. It is just the beginning and we look forward to continue the good work and move upward”

Dr Shubhangi Sharma, Executive Director IPLM said, “Our efforts are now bearing results, if we take the data from a sample of 60 libraries in last one year, 82 children’s corner were set up or activated. Number of children members increased from 2000 to 12000. Membership doubled from 3 lakhs to 6 lakhs. Number of visitor increased from 23 thousands to 8 lakhs. This is the result of increased number of program and activities over a period of time which libraries organized”.