KJo Spills Anushka’s Secret But She Has A Comeback 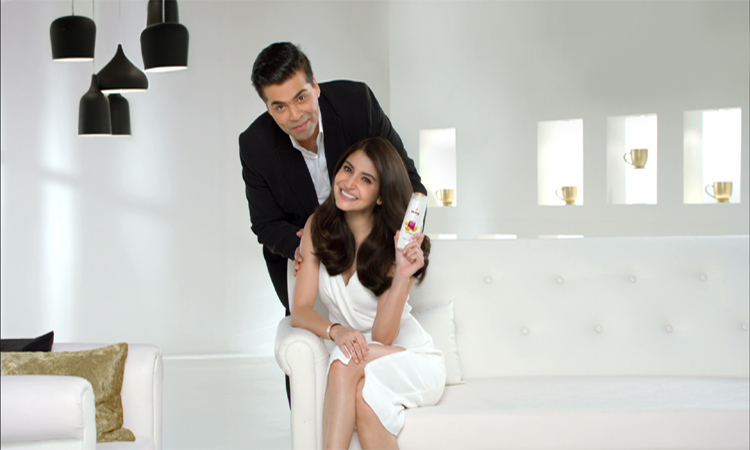 Known for his keen eye for style and beauty, film-maker Karan Johar has called out Anushka’s hair fall troubles and she is rightfully calling him her ‘biggest hair critic’. After the glamorous director pointed out how he’d notice her hair on car seats and on sets, things have changed. The leggy actor, who had been struggling with this hair fall problem credits Pantene to have come to her rescue and solving it once and for all.

“After I have switched to Pantene, I have to admit I have seen a change in my hair. The Pro-V formulation in this shampoo makes my hair so strong that I’ve forgotten what hair fall actually is.”, Anushka Sharma said on her struggle with hair fall initially and how she has managed to combat this problem with Pantene. When it comes to style tips, top-rated professionals such as Anushka and Karan Johar would only trust the best – which in this case is Pantene!

Pantene brand ambassador Anushka says, “I have known Karan all this while as that ‘critical’ friend; I would trust his judgment wholly on various things and I’m glad he is finally impressed by my hair!” she laughs. The filmmaker talks about her gorgeous hair. “Anushka’s hair is her crowning glory now and I believe the secret is Pantene. Her hair has never looked better!” he expressed.

Pantene continues to be the top choice across the globe of beauty queens like Anushka Sharma, Selena Gomez, Giselle Bundchen and millions of consumers. Worthy to point out, it remains the shampoo of choice for top celebrities and stylists, i.e. the hair experts themselves.

When it comes to style tips, top-rated professionals such as Anushka would only trust the best – which in this case is Karan Johar, who, in turn, trusts just Pantene.

So now when we have Karan Johar vouching for Anushka’s hair, it is easy for us, or anyone to guess what she’s using!