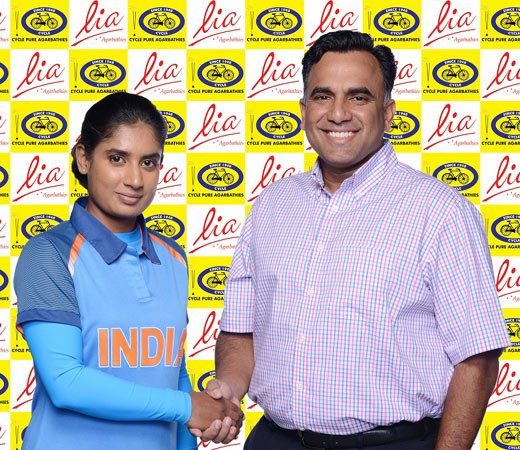 The brand has launched a new 360`advertising/marketing/brand campaign with both the brand ambassadors. The campaign is woven around the theme “Khushbu Jo Vishwas Jagaye” meaning fragrance that invokes faith. The campaign personifies the dreams one can have, the hopes and the limitless boundaries one can touch if they believe in themselves. The campaign, for the first time, experiments with the idea of women’s empowerment in the agarbathi industry.

Mr. Arjun M Ranga, Managing Director, Cycle Pure Agarbathies, said, “We are proud to have these two amazing women as our brand ambassadors. This collaboration and the campaign are aligned with how we want to position Lia. Believing in you and keeping the faith for meeting one’s bigger dreams. What better way to portray this than with these women of grit. Lia fragrances are aimed to invoke faith among people to achieve their dreams.”

“This new concept that O&M (Ogilvy & Mather) has come up with is something unique in this field, and hence we are really excited about it.” He added.

Lia has chosen Arunima as brand ambassador as she is an icon who is truly inspiring with her exceptional courage. With tremendous hope and self-belief, she met success despite all hurdles that came her way.

Speaking about the campaign, Arunima Sinha says, “It feels good to associate with a campaign that focuses on empowering women of our country.  I am glad to be a part of Lia’s message that encourages people to grow from strength to strength and conquer their dreams. “

The recent achievements of women in cricket are a reason to celebrate. It symbolizes the spirit that one can do anything if they believe in it. Under the captaincy of Mithali Raj, the Indian women’s cricket team triggered a wave of interest among girls in the sport which is traditionally more associated with men and also captured the imagination of all cricket lovers.

Speaking about the association, Mithali Raj, Captain, Indian Team says, “It is an awesome experience to collaborate with Lia agarbathi. The brand is truly one of a kind. Lia not only encourages women to pursue their dreams but also persistently motivates them to be independent. To associate with such an empowering campaign is an honour for me and I am extremely glad to be a part of it.”

With this campaign, Lia has cemented its position as a brand that signifies self-belief and belief in the greater good. The campaign, featuring both Arunima Sinha and Mithali Raj, has launched two TVCs dubbed in regional languages and supported by print ads, point-of-sale activities and brand activation.

Targeted at the aspiring and spiritual India, the campaign has been conceptualized and implemented by Ogilvy & Mather. The advertisement has a bold and unique plot which has never been tried by any agarbathi player in the country. The creative shows both Arunima and Mithali setting out for conquest in their respective fields and speaking about how faith has tremendous power to let you overcome all hurdles you may face.