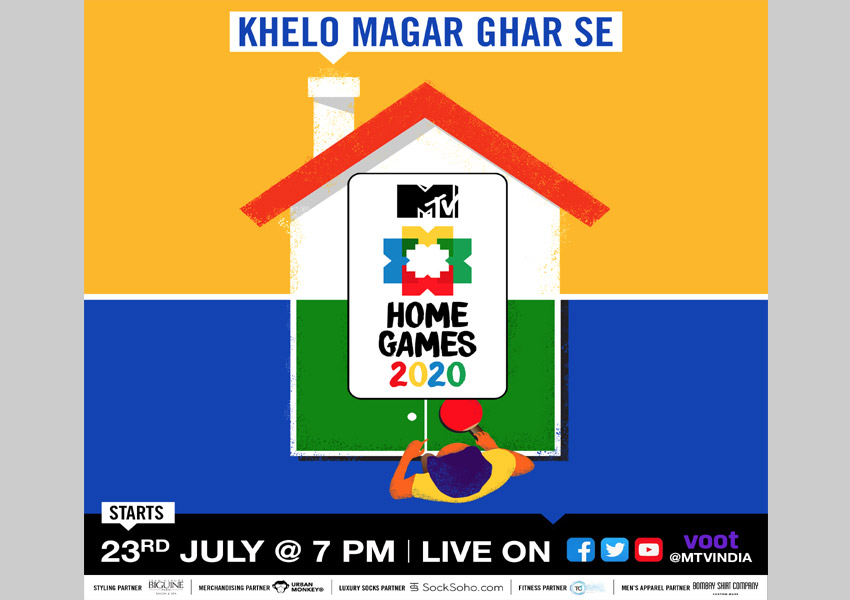 Excitement, nervousness, edge-of-the-seat adrenaline, and the rush of watching our favorite team win! Since the outburst of the pandemic, we have all missed watching sports LIVE. As the wait to watch sporting events seems far from over, MTV brings to its viewers a breather with a crazy blend of games, drama and entertainment. Starting 23rd July, MTV Home Games 2020 will feature every Thursday at 7PM only on MTV India Facebook, Twitter and YouTube. It is a one-of-its-kind game show that blends in the power of social media, digital and TV, to bring the anticipation and fun of live sports for you, from your living rooms!

MTV Home Games will give fans a chance to participate in 18 quirky, fun and sporty challenges. While participants can submit their entries for 17 challenges on Voot, MTV has tied up with Facebook and Instagram for one exclusive challenge on the newly launched short video feature Instagram Reels. This exclusive collaboration makes MTV the first broadcaster to leverage Instagram Reels for ‘call for entries’ for a show. Users can create videos of doing nimbu squats on Instagram, add creative filters and music and share it by tagging @MTVIndia and using hashtags #MTVHomeGames #FeelKaroReelKaro #FeelItReelIt.

Navin Shenoy, Head of Marketing – Youth, Music and English Entertainment, Viacom18 said “Over the years, MTV has catalysed the growth of user-generated content on TV and digital media. With MTV Home Games, we’ll engage youngsters with games and fun activities with a twist, amping up their competitiveness. Showcasing varied games and talent that otherwise go unnoticed, this initiative aims to bring in the thrill of sports that is missing due to the ongoing pandemic.” Further speaking about the partnership with Facebook and Instagram, Shenoy added, “We are happy to collaborate with Instagram Reels for MTV Home Games as it is a great feature to showcase short-form UGC, while also deeply engaging our large audience on social media.”

Ever heard of Twerk Aasans? Did you ever think Channa Ve could be more than just a peppy number? What if you were told that Chullu Bhar Paani could be a cool measure of fun? Or that you could be the OG Chimti Chameli, leaving behind everyone else? Well, these are some of the quirkiest tasks in Home Games 2020 that promises to make it an experience unlike any you have had before.. Streaming on Facebook, YouTube, and Twitter pages of MTV India, with the finale on your home screens on MTV, the show will have some of our favorites from the MTV FAM monitoring all the fun tasks performed by the contestants.  So now, you can twerk in a downward dog position while doing surya-namaskar, and squat while having a spoon in your mouth with a lemon on it, and more, to impress the likes of Rannvijay Singha and Varun Sood, along with many popular faces from Squadrann– an Indian Sports-entertainment collective, founded by Rannvijay.

So, get set to play “out of the box”, quite literally, and hop on this sporty ride with MTV Homes Games 2020, only on Facebook, YouTube, and Twitter. And don’t miss the finale of MTV Home Games 2020 on air, on 13th August at 7PM only on MTV.