NDTV-Fortis organised More to Give Walkathon 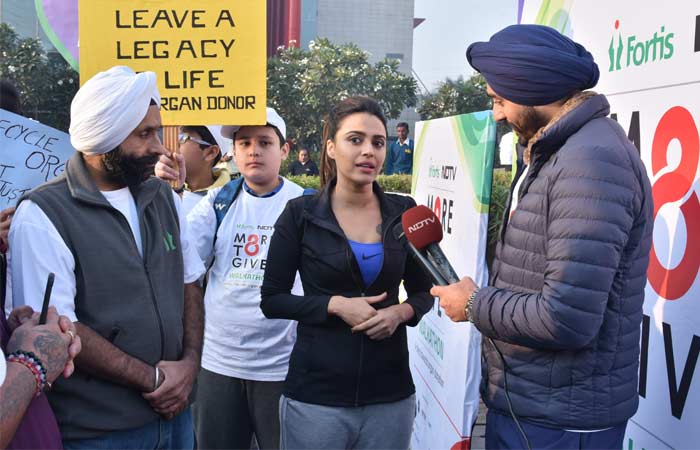 Every year 5 lakh People lose their lives waiting for organs. With less than 500 Cadaveric donations (from a deceased donor) taking place in 2015, India has an Organ Donation rate of 0.5 person/ million individuals, one of the lowest in the world. In a nation of over a billion people, there’s not even 1 donor in a million. NDTV and Fortis Healthcare took up the cause of creating awareness around the loss of lives that happen for the want of an organ and organised the NDTV Fortis More to Give Walkathon – A step towards organ donation’ to mobilise the nation in this direction.

Speaking at the occasion, Swara Bhaskar, Actor said, “Congratulations to NDTV and Fortis for this campaign More to Give. I think that organ donation is perhaps one of the most under represented causes in India today. I do want to say that we are living in a time where there is a lot of talk of service to nation, love for the nation, patriotism, nationalism, I think we should really consider this, the act of giving, donating one’s organ as a very basic act of loving a nation”

Vikram Chandra, Consulting Editor, NDTV said, “Every year, about four lakh people die waiting for organ transplants because of non-availability of organs. With More to Give we aim to raise awareness about the pressing need for organ donations and encourage people to join this cause.”

Bhavdeep Singh, CEO Fortis Healthcare, said, “It is heart-warming to see people come out in large numbers to support the noble cause of organ donation. In a country of a billion people we don’t even have 1 Donor per million population. With 5 Lac people dying every year waiting for organs, Fortis has decided to put its entire might behind this cause.”

As a culmination of the 4-month long campaign, walkathons were organised across 6  cities,  Bengaluru, Gurugram, Mumbai, Mohali, Jaipur and Chennai, which saw over 8,000 people from all walks of life including students, Corporates, etc. participating in the event.