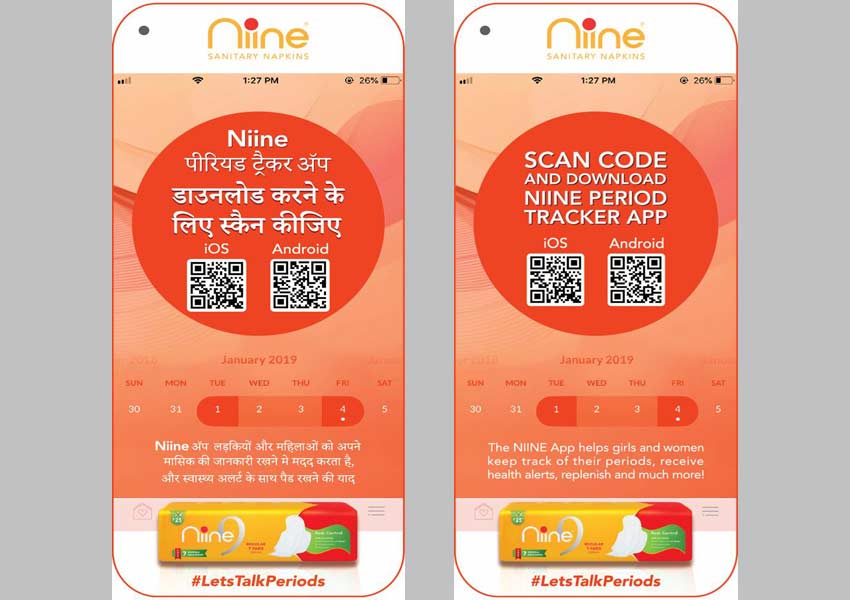 Niine Sanitary Napkins, the made-in-India sanitary napkin brand, has launched its Period Tracker app. The innovative new app, developed in consultation with medical professionals, is the first to be developed by a sanitary napkin brand in India. The app was launched with Niine Sanitary Napkins partners FOGSI, the Federation of Obstetric and Gynaecological Societies of India, represented by Dr. Jaideep Malhotra, President FOGSI 2018 and Dr. Narendra Malhotra, President FOGSI 2008 and JCI India, the voluntary International youth leadership organisation.

The need for the NinePeriod Tracker app is demonstrated by the staggering figures that show the lack of education surrounding menstruation. India is home to 355 million menstruating women and girls, yet 71% of girls have no knowledge of menstruation before their first period. With the topic still taboo in many households, the lack of discussion and education on menstruation is a direct cause behind the 82% of women and girls in India who do not use sanitary methods of managing their periods and leave themselves dangerously susceptible to reproductive illnesses. Further lack of being able to talk leads to several myths and low menstrual health- which this app aims to address.

The Niine Period Tracker is the solution for girls and women across India who want to move past the taboo and become more aware of their body’s functions and their natural menstrual cycle. Devised specifically for women across India, its Hindi language functionality is aimed at reaching a far broader user base than previous international English-language apps have ever been able to achieve.

Offering convenience to women and girls, the app initially asks for the user’s age, date of last period and how long their averaged period lasts. Once this is complete, users are able to the keep a log which helps the app to generate its prediction for the following month.

The app asks for detailed information from the user including body type, strength of their menstrual flow, any mood swings the user may experience, exercise levels, sexual activity and more, to help to create an accurate profile for the user. This detailed log helps the user to discover what a typical menstrual cycle for them looks like, and alerts them to any irregularities that appear in their periods over the longer term.

Speaking about the launch of the Niine Period Tracker app, Richa Singh, CEO, Niine Sanitary Napkins said “The Niine Period Tracker app builds on Niine’s already formidable reputation as a challenger brand, now becoming the first sanitary napkin brand to launch a period tracker app. We are also leading the way in innovationin the field with the app’s Amazon integration, making it easier than ever to order sanitary napkins through the app when supplies are running low. With this app, we are giving women across India more control over how they manage their periods, and are helping them to learn more about how their own bodies work.”

Discussing the significance of the app, Amar Tulsiyan, Founder, Niine Sanitary Napkins, said “I am delighted that women and girls across India can now access the Niine Period Tracker, the first such app from a sanitary napkin company. This leap into the digital sector marks a significant moment for the Niine Movement. 71% of girls in India have no knowledge of menstruation before their first period. This can help to embed the stigma in later life, which is why it is important that they learn to have a healthy relationship with their menstrual cycle. Having the ability to track your own period is an immensely empowering resource for women, and I believe the app embodies Niine’s aim to spread menstrual hygiene awareness through education, enrolment and enhancement.”

The Niine Period Tracker app is will regularly have medial facts and updates on menstruation in consultation with doctors of FOGSI(the Federation of Obstetric and Gynaecological Societies of India), India’s largest professional membership organisation for obstetricians and gynaecologists. The app features an FAQ section, which features a host of common questions and myths on menstruation answered by FOGSI professionals, providing users with facts on their menstrual health directly from the experts. The app will play a strong role in driving menstrual hygiene awareness, and users will also be able to access regular blogs to dispel ignorance around periods as well as news on Niine’s activities around India.

The app also represents Niine’s commitment to engage young women of India. Youth engagement plays a central role in their partnership with JCI (Junior Chamber International) India, who specialise in developing the leadership of young people in India.

With a host of features including daily notes, push notifications with reminders on buying sanitary napkins, how many days until the user’s period is due, ovulation dates and beneficial information for those who suffer from health issues such as PCOS, the Niine Period tracker app is the perfect way to ensure that women are never caught unprepared by their period again, with users able to buy sanitary napkins from Amazon at the click of a button.

Actively involved in the development of the app, Ankita Gupta, Creative Director, said “Niine’s new app goes far beyond an ordinary period tracker app and disrupts the existing women’s health app market. Our aim was to create an innovative one-stop resource that women and girls can use throughout the whole month. We took into account a range of customer insights and integrated them within the app to ensure that no woman is left behind. With an easy to access interface, we’ve designed the app so that any woman can monitor their periods, ask for advice and learn about their own body. We’ve had very positive feedback from those who have used it, and it is our hope that it will help more women to easily manage their periods.”

The Niine Period Tracker App is now available for FREE download for Android from Google Play and for iOS from the App Store.