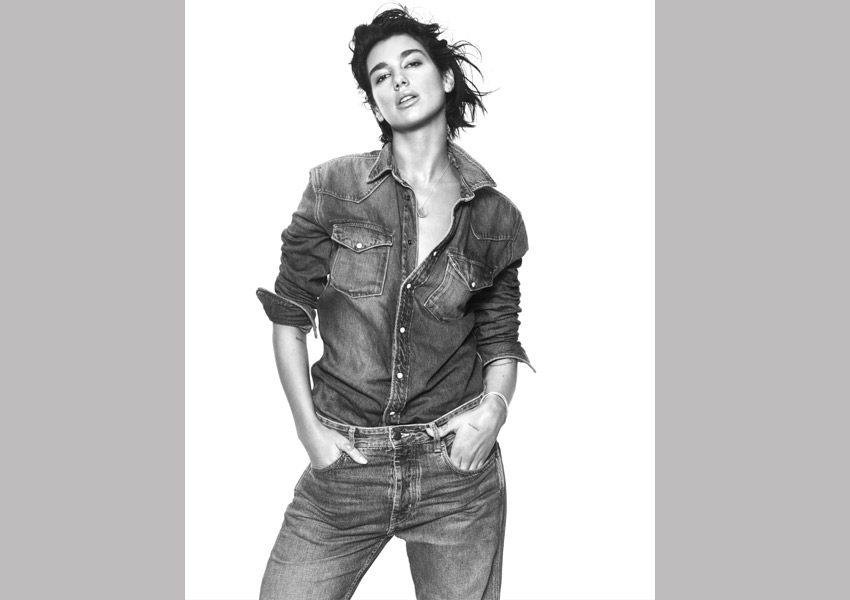 Pepe Jeans, the British denim brand is delighted to announce a new partnership with Dua Lipa, one of the most successful musical artists and style icons of her generation. Following in the footsteps of fashion icons and Hollywood stars, Dua Lipa begins her new role by starring in the Spring/Summer 2019 campaign for Pepe Jeans, photographed by David Sims.

The campaign itself is a celebration of the heritage of Pepe Jeans, which was one of the first British brands to bring a distinct fashion perspective to the world of denim in 1973. Fresh-faced and effortlessly poised, Dua Lipa is photographed in black and white wearing a range of classic denim pieces. An emphasis on strength, natural beauty and the timeless appeal of denim takes precedent in both the campaign and the collection itself.

At 23, Dua Lipa has taken the music world by storm and become a fashion icon for her millions of fans. After releasing her self-titled debut album ‘Dua Lipa’ in 2017, she made history when nominated for five categories at the 2018 Brit Awards – the first female to receive so many nominations. She was awarded ‘Best British Female Solo Artist’ and ‘Best British Breakthrough Act’. For the last two years, Dua Lipa has also been the most streamed female artist in the world. She continues to break records – the music video for her hit single ‘New Rules, her anthem for female empowerment, gained more than a billion views on YouTube, making her the youngest female artist to hit this target. ‘One Kiss’ Dua’s collaboration with Calvin Harris became the biggest selling single of 2018 in the UKand she has sold over 40 million singles and over 3.4 million albums worldwide. And the awards keep coming with Dua winning two Grammys for “Best New Artist” and “Best Dance Recording” with Silk City for their massive hit “Electricity” at the 61st Annual Grammy Awards and the award for “Best British Single” for her track “One Kiss”, with Calvin Harris at the 2019 Brit Awards.

Dua Lipa and Pepe Jeans are a perfect fit in more ways than one. Both were born in London and have become symbols of idiosyncratic British style. Long before joining Pepe Jeans, DuaLipa was a fan of the brand’s advertising campaigns as a teenager.

“Dua Lipa is one of the world’s fastest rising stars and has a style which perfectly fits the Pepe Jeans brand DNA“ said Mark Blenkinsop CMO. “The partnership marks a new milestone for the Pepe Jeans brand as we look to consolidate the brand presence in Europe and seek strategic growth in new markets, 2019 promises to be an exciting year for both Dua Lipa & Pepe Jeans as we will announce a number of initiatives to excite & engage consumers and the B2B trade customers”.

The inaugural campaign is photographed by David Sims, the British photographer who began his career photographing musical icons including David Bowie, Nirvana, Bjork and Courtney Love and has since shaped the imagery of titles including Vogue, The Face and i-D. Sims previously photographed Daria Werbowy and Ashton Kutcher for a Pepe Jeans campaign in 2005, joining an illustrious list of photographers who have worked for the brand, including Steven Meisel, Bruce Weber, Steven Klein and Mario Sorrenti. The London-based photographer’s modern vision of beauty and style made him the perfect choice for working with Dua Lipa and Pepe Jeans is pleased to continue its collaboration with Sims.

An Increase of 48% in searches for LeoVegas