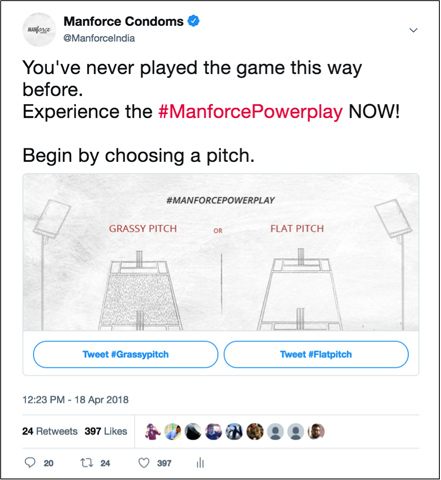 The much-awaited cricket T20 extravaganza, Indian Premier League a.k.a, IPL, went underway on the 7th of April, 2018. Other than the 8 teams locking horns for the coveted trophy, brands also battle it out to tap the potential of this gala event & grab audience’s attention, through ATL and Digital mediums.

Manforce, in association with award-winning agency, Grapes Digital, has come up with an engaging concept of #ManforcePowerplay. Known for its incredibly quirky, topical campaigns, Manforce always strives at bringing forth interesting concepts that leave the audiences, in awe of its creativity and subtle way of delivering the message with a strong brand connect. Manforce is also one of the principal sponsors of the IPL team, Sunrisers Hyderabad.

What is #ManforcePowerplay all about?

While your favorite IPL team is battling to dominate the powerplay on the field, you play it on Twitter. It’s time to indulge in some #ManforcePowerplay, an activity that will keep you on the edge during the game. Get in the players’ shoes and play the thrilling game of IPL, in a way you like. Choose your type of pitch and get ready to smash it or hit it hard, out of the park.

Shradha Agarwal, Co-Founder and COO, Grapes Digital, the brains behind the idea as well, says, “As a digital agency, we are always on the lookout of ideas that utilize the tools available on social media platforms. The #ManforcePowerplay challenge is a perfect example of how to make the most of grabbing the opportunity of IPL and Twitter’s features, to engage the digital audience. If curiosity is driving you up the wall, go check out the #ManforcePowerplay on Twitter – a campaign that will make you jump out of bed, only to have you right back in it.”

“IPL brings together the entire nation. As a leading condom brand in the country that’s looked up to by the digital landscape for innovative concepts, this is the right opportunity for us to initiate a conversation and take our engagement with the already involved digital audience, to the next-level. #ManforcePowerplay combines the action of IPL with a fun conversation, opening up a zone that has not existed for the Indian digital audience before.”

The tweeps are loving the activity, with the count of tweets already crossing the 25,000 mark. As a result of the phenomenal response, #ManforcePowerplay also trended organically.

Links to the campaign:-

Whoppl collaborates with Livspace for an influencer marketing campaign 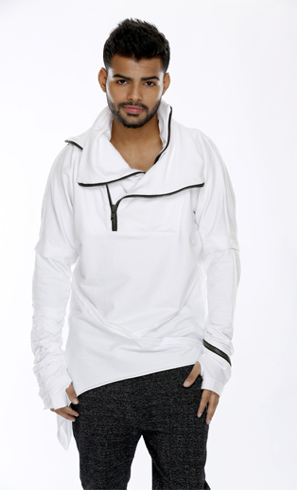