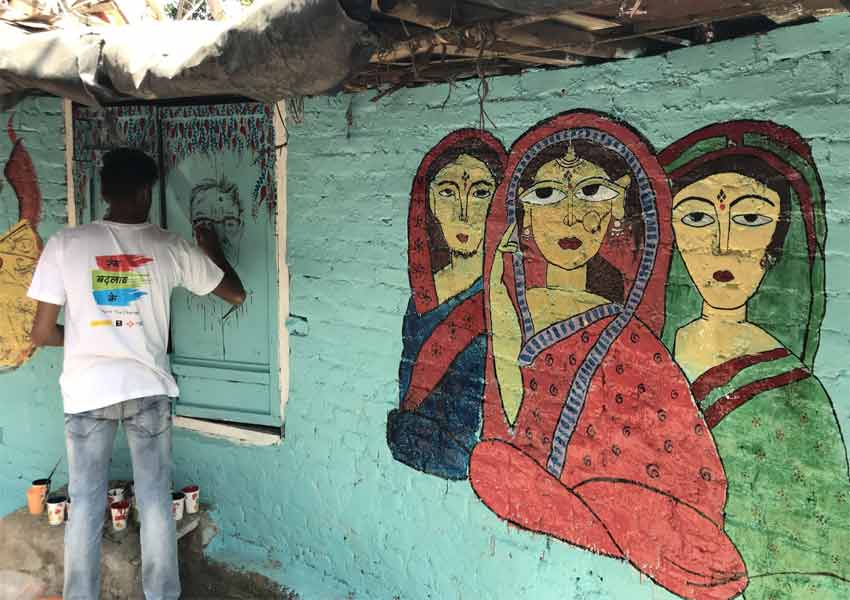 An urban slum community comprising over 10,000 people situated in the heart of Chanakyapuri, amongst the poshest areas in the Delhi/NCR region, the Sanjay Camp was in dire need of beautification and a dash of color. This need was met yesterday, as over 2000 students of 70 universities and colleges’ volunteers entered the locality with buckets of paint and brushes in tow. This past Sunday morning, 1500+ walls of the previously drab Sanjay Camp was transformed into a vivid canvas that showcased graffiti of Indian culture and tradition to further enable child-friendly communities.

This vibrant transformation was heralded by youth, who enthusiastically joined in to ‘Paint the Change’ at the long-standing slum that has been home to numerous families for several generations. Hundreds of young and energetic volunteers, artists, writers, and photographers turned up to paint, beautify, photograph, and tell stories about the Sanjay Camp slum community as part of a two-part social initiative, ‘Rang Badlav Ke – Paint the Change’, by Shalimar Paints.

Commenting on the event, Minal Srivastava, Vice President, Marketing, Shalimar Paints Limited, said, “The initiative is our underlined commitment to drive positive transformation and better the quality of people’s live. The Sanjay Camp has been home to numerous families for generations. It was time to brighten their lives with colors and give them a chance to tell their stories. We are thrilled to see the massive participation of the youth in this initiative. Their drive to bring about a change and uplift the lives of those less fortunate than them was palpable, while their energy was a testament to the fact that benevolence is and remains an inherently human trait.”

The second part of the event was held on October 13-14 that called upon the city’s youth in order to transform more parts of the Sanjay Camp into lively, vivacious places to live in. ‘Rang Badlav Ke – Paint the Change!’ not only added some much-needed artistic splendor to the slum area but also helped preserve a neighborhood which is a sanctuary to thousands of people.