SpiceJet unites Army Jawans with their Sisters on ‘Raksha Bandhan’ 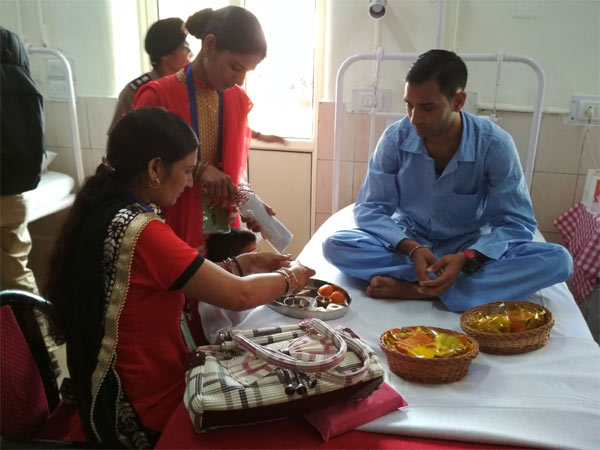 SpiceJet celebrated Raksha Bandhan — the festival that symbolises the eternal love and devotion of a brother and his sister – in a unique way this year! In a first-of-its-kind initiative, the country’s favourite low-cost carrier flew almost 50 sisters and families of Army Jawans to meet their brothers posted on the western border and the national capital, in what was an exciting two-day event.

SpiceJet scheduled these celebrations for India’s real heroes and their sisters both in Delhi and Srinagar on 6th and 7th August respectively.

On August 5, eight sisters were flown in from various cities across India to be re-united on the special occasion with their brothers at the base station in Delhi.  The sisters and families came from small towns in Darjeeling, Goa, Tezpur in Assam, Mohali, Visakhapatnam, Ganjam in Odisha and Panpur in Madhya Pradesh, besides one from Mumbai.

The jawans and their sisters celebrated ‘Raksha Bandhan’ with members of SpiceJet team at Shankar Vihar in Delhi on August 6. It was a heartwarming sight to see the sisters fondly relive the golden memories of their childhood with their brothers. The airline also provided refreshments and goodies to both the soldiers and their families.

On August 7 morning, the other 40 siblings and their families along with a SpiceJet team travelled to Srinagar to celebrate the special occasion. SpiceJet made it possible for the families, traveling from across India, to reach Delhi and then travel to Srinagar to celebrate the enduring relationship; the airline also arranged the stay for the families both in Delhi and Srinagar. The contingent of 60 people drove from the Srinagar airport to the Srinagar Base Hospital, where injured army officers and jawans are treated. The sisters then tied the pious thread on their brother’s wrists for their well-being and longevity.

On this festive occasion, SpiceJet CMD – Mr. Ajay Singh said, “Siblings share a beautiful bond that transcends time and distance. There can be no better gift for a brother and sister than the company of each other on the auspicious occasion of Raksha Bandhan more so in the case of our army jawans who rarely get an opportunity to meet their sisters on this day. As a mark of respect for their commitment, SpiceJet is proud to be a part of this endearing moment between the jawans and their sisters.”