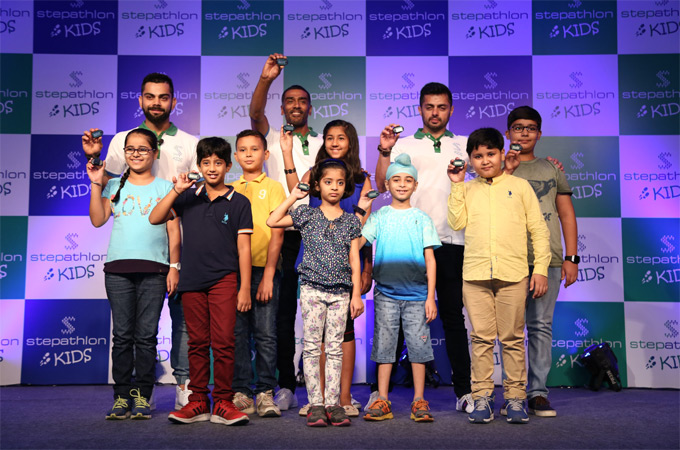 The future of India is witnessing a lifestyle epidemic today! With over 22% of kids in India currently obese and facing health risks as per the WHO Commission Study, 2014 – the alarming lack of fitness in today’s kids is one of the biggest threats being faced by India. Aiming to curb this trend of sedentary behavior among children in India, Stepathlon Lifestyle Pvt. Ltd. and Virat Kohli today announced the launch of their new company Stepathlon Kids – a company focused on the health and wellness of the next generation. Through its annual 30 Day Race around a virtual world, Stepathlon Kids will urge the children of India to take 15,000 steps a day – towards a healthy lifestyle and to create long term positive behaviour.

Stepathlon Kids will be focused on building children’s holistic health in the country – encouraging physical activity and educating kids on nutrition, exercise, stress and much more. A pioneer and leader in the corporate wellness space, Stepathlon enters the B2C space with Stepathlon Kids, leveraging its wellness expertise to create offerings for the children of India. Virat Kohli will play a pivotal role in Stepathlon Kids, creating widespread awareness for the initiative, assuming the role of custodian of the future health of the nation.

The company will kick start its initiatives with the launch of a nationwide campaign – a 30 day, pedometer-based, mass participation virtual race built to promote fitness amongst children with an emphasis on holistic health. Initially targeting children in the 8-12 years age bracket, through this campaign, the company will be creating awareness amongst children about the benefits of physical activity through its website and via various offline and online activities. Through its annual 30 Day Race, Stepathlon Kids’ target for the first year is to reach 50,000 children, aiming to use technology positively and reach out to kids across the nation via a gamified environment, which will encourage teamwork, healthy competition while also being educational and fun.

Children will be given pedometers to track their steps during the 30 Day Race. These steps when entered on the Stepathlon Kids website get converted into distance and the team will move across a map of the world. They will be grouped in teams of 5 and the gamified race will take them on a virtual journey around the world, enriching them with information on health, history, social studies and general knowledge. Additionally, they will be given multiple opportunities to win prizes and achieve recognition via contests and mini challenges.

After pioneering the corporate wellness space, Stepathlon is now aiming to create an even bigger impact on the lives of the younger generation. Talking about its entry into the B2C space with Stepathlon Kids, Ravi Krishnan, Co-Founder & CEO, Stepathlon Lifestyle Pvt. Ltd. said, “Since 2012, Stepathlon has had positive impact on the health of Corporate India and we are now looking at making a difference to the lives of future generations. The physical, mental and emotional health of children is negatively affected by a sedentary lifestyle. With Stepathlon Kids, we aim to ingrain health and wellness in them at an early stage, to build a foundation that will last them a lifetime. Virat has been through a personal fitness transformation and we are proud, and honoured that Virat has chosen Stepathlon Kids to build a healthier nation. This is another way that Virat Kohli is going to be leading the country. Together we can build on the phenomenal success Stepathlon has had in the corporate space.”

Talking about the association and the need for creating larger awareness around children health in India, Virat Kohli said, “Children are the foundation of our country and their health and fitness will play a very important role in our country’s progress. I see many parents have great aspirations for their children, just like mine did. In order to achieve these goals, my appeal to all parents would be to first ensure your child is fit, healthy and happy. Stepathlon Kids is a first of its kind and much needed offering in our country, and I’m sure Stepathlon will replicate the success it has witnessed in the corporate space. I will be substantially involved in the development and promotion of Stepathlon Kids to achieve our goal to create a healthier nation through the future of India – our kids.”

Amit Sajdeh, CEO, Cornerstone Sport and Entertainment Pvt Ltd, adds, “Ravi and I have known each other for close to 15 years now and we have been looking for the right opportunity to work together and we have found that with Stepathlon Kids. Stepathlon’s success in the corporate space has been inspiring and this is the right step for us to create positive impact on future generations. Virat and Cornerstone are extremely thrilled to be part of this path breaking initiative.”

Stepathlon Kids will associate with relevant brands and organisations in order to achieve its goals.

Ravi Krishnan added, “We are also excited to be working with Bunty and Cornerstone on Stepathlon Kids.

Cornerstone is a premier agency in the sports business and their experience and acumen combined with ours will be a key factor in the success of Stepathlon Kids.”
Talking about the science behind why 15,000 steps a day is integral to a child’s fitness, Shane Bilsborough, Exercise Physiologist and Co-Founder of Stepathlon said, “Research tells us that globally, recommendations for children with respect to physical activity, is that they should get 60 minutes of moderate to vigorous intensity activity daily. This corresponds to roughly 6600-7000 steps. On top of that we need to consider that children also need to include more incidental movement during the course of the day. Taking this and all the scientific evidence available, we have established the 15,000 daily step target.”

Commenting on the need for such an initiative in the country, John Gloster, former physiotherapist to the Indian cricket team said, “Kids are the key to the future. They are our next generation. Stepathlon Kids is the perfect vehicle to encourage an active lifestyle. This is a great opportunity to create a habit for life. Stepathlon is halfway there with its initiative for adults. Stepathlon Kids is the more important half. This can be the next big thing to get kids to be the next generation of movers which is why I think it’s an amazing initiative. It’s a great platform that can be used to educate children. It’s shocking that 1 in 4 children are pre-diabetic. We also need to use Stepathlon Kids as a medium to educate children about the importance of diet and nutrition, about health and wellbeing. Being physically active is half of the equation and a good healthy diet is the second half.”

Adding to the same, Dr. Anand Ganesan, postdoctoral fellow at the Centre for Heart Rhythm Disorders, University of Adelaide, said, “It is exciting to see the Stepathlon virtual race grow to include children. Stepathlon has demonstrated that it can help adults move more, sit less and improve their weight. Stepathlon’s initiative has the potential to make a significant contribution to addressing the international crisis of physical inactivity and obesity affecting children around the world.”

So it’s time to get the children of India to step up and work towards a healthier lifestyle with Stepathlon Kids! 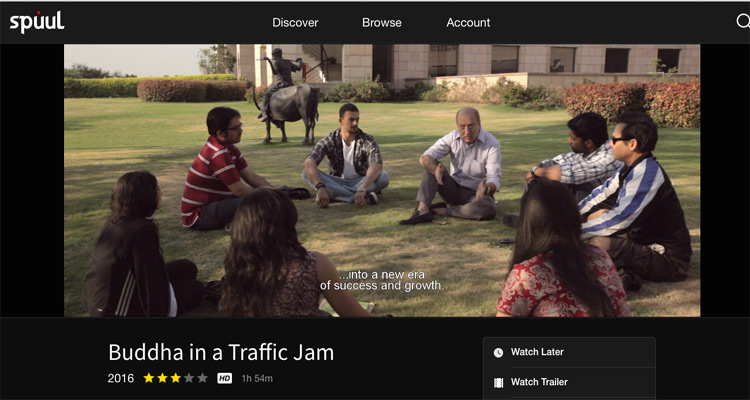