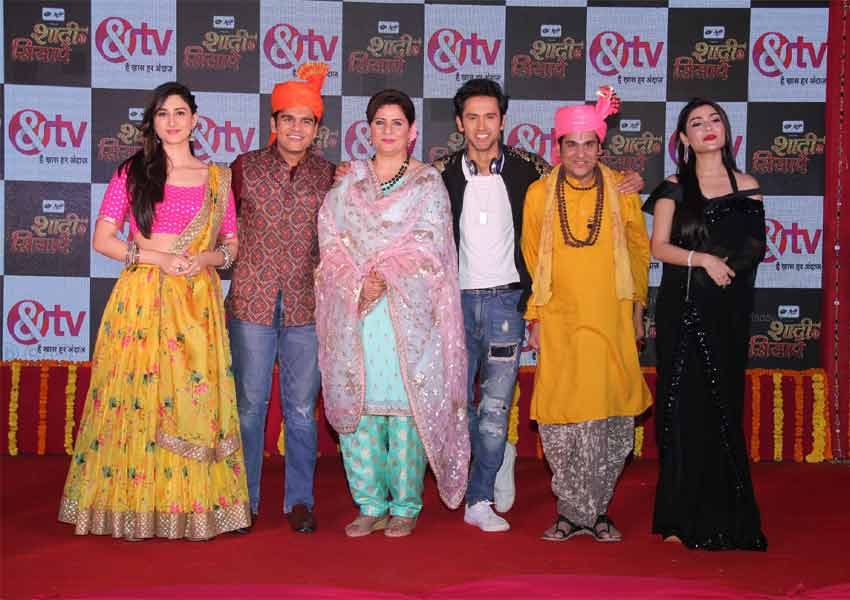 &TV is all set to present a weekend ‘dramedy’ titled Shaadi Ke Siyape. The show promises to bring alive all emotions and fervour of a wedding – dance, drama, music, comedy and a lot of siyapas to solve! Produced by Full House Media, Shaadi Ke Siyape brings together a strong ensemble cast with popular television names like Alka Badola Kaushal, Sheen Das, Bhavya Gandhi, Rahul Singh, Mishkat Varma and Ankita Bahuguna amongst others. Set to premiere from 16th March 2019, the new weekend episodic property will air every Saturday and Sunday at 8:00 pm on &TV.

Watch the mayhem unfold as marriage hall owner Fancy aunty with her squad of uniquely gifted human-aliens take on the world of weddings! The new wedding planners in town are a formidable team of a techno-expert chef, a gossip-loving, all rounder nachaniya cum make-up artist, a classy DJ and an ever inquisitive pandit – although with an extra-terrestrial twist! Adding to the this, audiences will witness two other human-alien characters – a kid royal Prince and a seductive Catwoman on the prowl. The show explores interesting stories of various wedding ceremonies with their respective cultural rituals, milieus, traditions and customs. It highlights all that’s good in Indian weddings, at the same time it attempts to create awareness about some of the negative customs related to this sacred union in an entertaining manner.

Commenting on the new offering, Vishnu Shankar, Head, &TV said, “For us Indians, weddings are an immensely integral and special part of our lives, celebrated with great fervour no lesser than a grand festival! What adds to its charm is that every wedding has its own unique story to tell, reflecting beautifully how diverse and rich each of our cultures, people and wedding rituals are. Bringing alive all the fun and shenanigans of Indian weddings, Shaadi Ke Siyape is a great combination of comedy and drama, a weekend watch which we believe will thoroughly entertain the viewers.”

Speaking about the unique concept of the show, Producer Sonali Jaffar, Full House Media said, “Shaadis in India are a grand celebration unlike any other. In a society that treats marriage and its rituals like a big festival, we decided to give an alternate dimension to this thought by introducing a species who are completely unaware of this concept and the way it is religiously followed in India. With weddings that come along with their own set of siyapas, the additional element of these aliens will provide the show with the much-needed comic relief and entertainment. With comedy and drama occupying a major chunk in the entertainment space, we decided to tell this light-hearted story in our own unique way. Shaadi Ke Siyape will provide a different flavour to the audience’s current entertainment palette.”

Ecstatic at having yet another diverse character to her credit, talented veteran actress Alka Badola Kaushal said, “Unlike some of the roles that I have essayed throughout my film and television career, Fancy Aunty from Shaadi Ke Siyape was a character that I immediately connected with. Quite unlike her name she is a simple and benevolent woman whose inner strength and optimism are her weapons against the struggles she faces while dealing with news of her missing husband and a series of financial debts. Her sense of discipline and a need for organization make her one of the finest wedding planners in town. Her unpredictable journey with a bunch of aliens is an interesting tale which is sure to fascinate viewers.”

“I urge my fans and viewers to please tune in to Shaadi Ke Siyape by subscribing to the Zee bouquet of channels as per the new TRAI mandate. After all, Zee is the No. 1 network for family entertainment, like a one-stop-shop with programmes of interest for every member of the family. So, to continue enjoying our show on &TV, please buy the Zee Family Pack – Hindi SD/HD today by choosing the ZEE HSM Bouquet,” she added.

Elaborating on his character, Bhavya Gandhi said, “I will be essaying the role of an alien in Shaadi Ke Siyape whose unique super power has enabled him to take the appearance of a human. Nanku, as quirky as the name sounds will have some unique powers that sets him aside from the rest. He is Gujrati like me and his powers will often be used to salvage unexpected siyapas that take place during Fancy’s wedding planning arrangements.  I have always found myself comfortable in the comedy space, but this character of an alien is surely going to be an exciting experience for me. Just like my earlier role, Nanku is an entertaining watch and I am eager to see how the audience reacts to my whole new avatar with this dramedy show. To be a part of our new offering filled with comedy and drama, I request &TV loyalists to subscribe and purchase the Zee Family Pack.