Behrouz Biryani and TVF brings The Royal Palate, goes live on 16th May 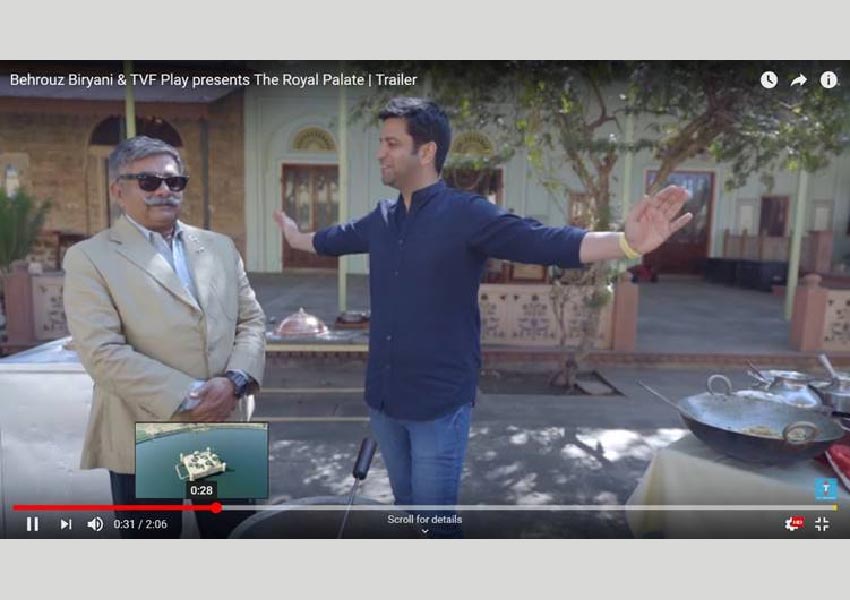 Behrouz Biryani has associated with The Viral Fever and Chef Kunal Kapoor to bring to viewers a show that takes viewers on a fascinating journey to discover hidden culinary gems from royal kitchens across India. The show will feature not only celebrity chefs such as Sara Todd but also actors such as Barkha Singh amongst others, who embark on a journey across the length and breadth of India, speaking to royal families about the origins of delicacies such as halwa and laal maas. The show with stream on TVFPlay and The Timeliners, YouTube channel starting 16th May, every Thursday.

Hosted by Chef Kunal Kapoor, The Royal Palate will give viewers an insider’s view into India’s regal culinary heritage. Participating for the first time ever, will also be members of royal families across India.

Speaking of the association, Sagar Kochhar, Group Chief Marketing Officer, Rebel Foods said, “Behrouz Biryani is a brand built not just on a recipe, but on the journey, the memories of a great culinary experience. The Royal Palate is an extension of experiences, where we explore long lost royal recipes that hail from different parts of the country, in an attempt to keep them alive. Feverish virality helps take these stories to the right audiences and build conversations around strong content, one of the strongest reasons we associated with The Viral Fever”.

Discovering new foods and cuisines is one of the key delights for the Instagram generation and The Royal Palate intends to help millennials discover food while taking them on a royal smorgasbord of delicacies.

Speaking about the show, Rahul Sarangi, Global Head – Content and Business, The Viral Fever said, “Part-travelogue, part-culinary showcase, Royal Palate is an innovative series that seamlessly weaves anecdotes, influencers, interviews with royal families and food. The association with Behrouz Biryani was a perfect fit to add to this royal journey. We had been toying with new ideas and ways to connect with our discerning audience and our focus this year is going to be on exploring creative genres and formats. With this delightful new offering we are hoping to reach newer audiences while engaging our existing viewer base”.

The trailer for the show can be viewed here.