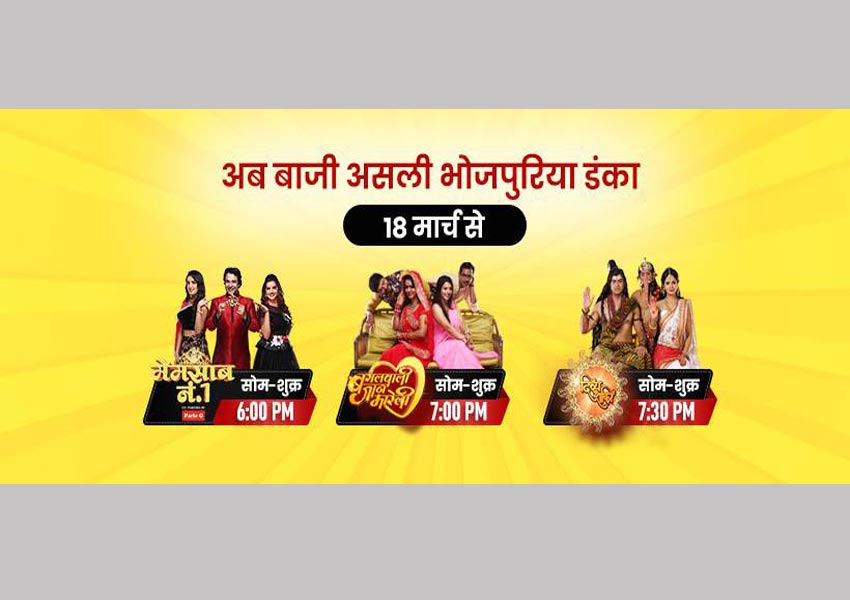 Big Ganga is all set to cater to the growing voice of its viewers for original content with 2 hours of weekday and 1 hour of weekend original Bhojpuri content. On weekdays, the prime time will start with ‘Memsaab No 1’, an iconic non-fiction reality show, which provides a platform to housewives and has a legacy of having completed 8 successful seasons since inception. This will be followed by the first-time launch of two Bhojpuri fiction shows for the region given the growing demand from viewers for the same – ‘Divya Shakti’ and ‘Bagal Wali Jaan Maareli’, specifically designed to cater to high bhakti and masti content affinity amongst the regional viewers. Furthermore, to facilitate relaxed weekend viewing, Raag Chunavi – a topical mixed format reality show around the election and related woes is in the pipeline. With the channel being a prominent entity on Free Dish and other leading distribution networks (Airtel, D2H, Tata Sky, Dish TV), this quartet of offerings shall cater to the growing demographic of the Bhojpuri-speaking audience in the region.

The premier television channel has strengthened its position, as the undisputed leader, by being the first to launch original fictional shows in the market where none exist for several years now. All four shows will be telecast from Monday, March 18, from Monday to Friday between the time band 6:00 pm to 8:00 pm and Sat-Sun 6:00 pm-8:00 pm. With these offerings, the channel stays true to its brand ethos by laying emphasis on providing its viewers with diverse as well as original content.

Memsaab No.1 is a successful reality series in the region. It receives both high on ground as well as on air response given it being the only and unique regional offering, which provides a status platform for housewives to show their talent. These women display their skills across dance, music, games, and various challenging activities to win the coveted title of being the best Memsaab of the season. Given its high entertainment quotient, it generates high viewership and interest from both male and female viewers of the region.

‘Bagal Wali Jaan Maareli’ is a fun-filled ride of two neighbouring gentlemen who despite being in love with their wives, also strongly adhere to the idea of ‘love thy neighbour’s wife’. The show is set up in a fictional colony located in Arra, Bihar and has motley of regional quirky characters to add spice to the show and is bound to leave the audience in splits with their idiosyncratic antics. Given the region has a high liking for OTT, its quirky humour is bound to be a success with young and old alike.

Divya Shakti is a socio-mythological fiction showcasing stories of the power of faith and bhakti. The show will feature topical vrats, festivals, regional spiritual figure, bhakti and miracle stories, which shall evoke a high connect amongst the viewers given high relatability. The show further adopts an innovative format of human stories of endurance in faith being narrated by Parvati and Ganesh as narrator, which is bound to connect with the regional sensibility towards high reverence to the mother-son relationship.

Raag Chunavi will be a multi-talent format non-fiction show featuring the region’s best stand-up comedians, comedy poets, mimicry artists, who will take pot-shots at various election-related themes through a common man’s viewpoint and pathos. It will have high traction given the topicality as well as the connect with on-ground reality of a common Indian voter.

The line-up for all the shows consists of some prominent names in the industry. Actress Dalljiet Kaur, a popular name in the Hindi GEC space, is playing a prominent role in the mythological show Divya Shakti. While artists Bhawna Barthwal, Prakash Jais, Gunjan Pant, and Vijay Singh will be seen in the rom-com Bagal Wali Jaan Maareli. The most-loved show of the region, Memsaab No 1, which gives a platform to homemakers, will see celebrity judges Madhu Sharma along with gorgeous actress Amrapali Dubey judging the show. Another major highlight to the show will be actor Vinay Anand’s fine hosting skills, to which the viewers will be treated, for this season as well.

Commenting on the development, Amarpreet Singh Saini, Business Head – Big Ganga said, “These are exciting times for us. In the region we have received high demand for original content, especially amongst genres like socio-mytho and comedy, which is also is amongst the most consumed genres in the non-Bhojpuri content space as per the consumer research data. Thus we are extremely confident that through our fiction offerings we will be catering to this need gap and will once again be triumphing our core consumers’ cause.  With the backing of iconic and topical non-fiction properties, we are sure to further deepen our pride positioning amongst Bhojpuri viewers as they will now have their own original Bhojpuri Prime Time. We are very optimistic about a positive and buoyant response from our viewers.”

Amit Shah, Cluster Head, Regional Hindi Speaking Markets (RHSM) – ZEEL further added, “Bhojpuri entertainment is one of the fastest growing industries in the country and being a network with one of the highest viewership in the market, it is our key focus. The market has grown exponentially in the past few years and like other regional Hindi speaking markets, Bihar, Jharkhand, and Purvanchal regions are also seeking differentiated customized regional content. We at ZEE have always set new benchmarks in national as well as regional content space. With our new launches, we aim to form a further deeper bond with our viewers by offering content that resonates with their sensibilities as well as caters to their growing aspiration. With these launches, we are not only making inroads in the region but are opening doors for many of our stakeholders as well as advertisers. We have some of the most talented names associated with these shows which have received an unprecedented viewership in this respective belt.”