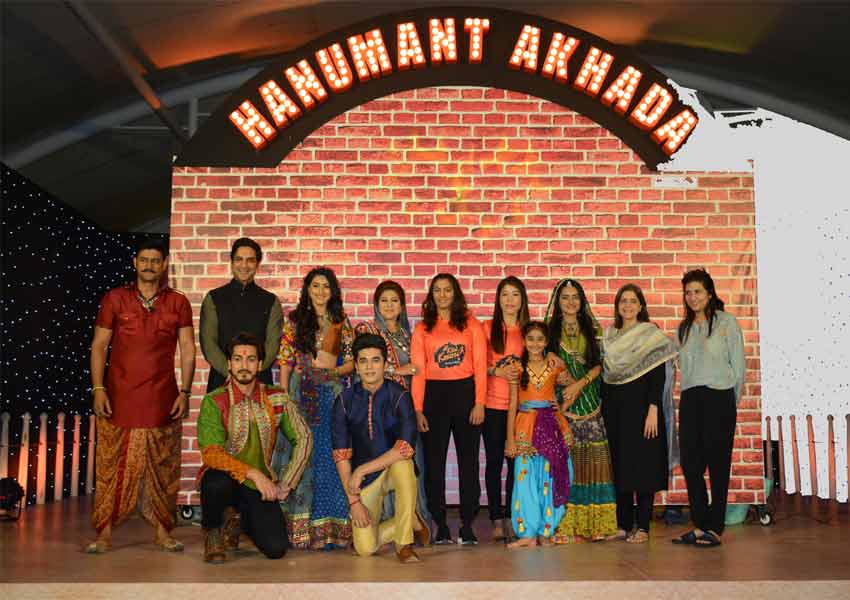 COLORS brings to you, Kesari Nandan– a story of a dogged little girl, Kesari, and her custom-binding father, Hanumant Singh. Produced by Contiloe Pictures, Kesari Nandan premiers on 01 January 2019 and will air every Monday to Friday at 8:30PM.

The journey begins in Rajasthan where Hanumant Singh trains young guns for wrestling in his akhada.  He is a man who believes that men and women have set roles in the society and must remain confined to them. He is also a father who aspires for his son to win the country an Olympic gold medal in wrestling, however, it’s his daughter Kesari who secretly harbors the desire to uphold her father’s legacy. With an undeterred resolve Kesari sets off to do something unthinkable much against the will of her father and challenging mindsets along the way.

The Launch announcement held at a suburban hotel in Mumbai saw the winner of India’s first ever gold medal in women’s wrestling at the Commonwealth Games, Geeta Phogat and Gold Medalist at Women’s World Boxing, Mary Kom come together in support of the show and the #KhelKesari movement.

At the launch said, Nina Elavia Jaipuria – Head, Hindi Mass Entertainment and Kids TV Network, Viacom18, “Kesari Nandan is about an unlikely protagonist who braves all obstacles to become a national hero in a sport that continues to be associated with machismo and virility. It’s a poignant portrayal of a father-daughter equation that transcends beyond the four corners of their middle-class household to an akhada and eventually to the wrestling ring of the Olympics. We have devised an impactful on-air campaign called #KhelKesari to promote the spirit of sportsmanship and encourage women to take up sports. With support from stalwarts like Geeta Phogat and Mary Kom we want to inspire girls to dream big and become beacons of change.”

She further added, “New Year will mark the advent of a fresh line-up of relatable content that will add newness to our bouquet of offerings. We will begin the year with the weekday prime-time, Kesari Nandan. The weekend primetime will be bolstered by Khatron Ke Khiladiand a crime-drama called Courtroom. Further along the way we have gripping concepts in the form of Jhaansi Ki Raniand Gath Bandhanthat will make the channel distinct and diverse.”

Speaking about the concept of the show, Manisha Sharma, Chief Content Officer, Hindi Mass Entertainment, Viacom18 said, “After having presented to its viewers numerous shows with social messages and having in some way contributed to societal changes through these shows, COLORS now brings to its loyal viewers a truly inspiring tale of this cute little aspirational girl called, Kesari. She is someone who challenges the societal stereotype and triumphs her dream of becoming a champion wrestler albeit with the acknowledgement of her father. ‘Kesari Nandan’ captures the beautiful journey of this zesty, determined, hardworking young girl who overcomes difficult challenges to accomplish what she desires the most. It indeed is the story of every girl who dares to dream big and chase that dream, just like Ms Mary Kom and Ms Geeta Phogat, who have come forward to further this cause.”

Abhimanyu Singh, CEO, Contiloe Pictures said,“Kesari Nandan is as close to reality as it gets. We have put in all resources to make the show look as authentic as possible. It’s an endearing story of a super positive girl who despite all odds embarks on a journey to conquer a male dominated wrestling world.”

At the launch Wrestler Geeta Phogat said, “I applaud COLORS for choosing a concept like Kesari Nandan. It is both, unique and real and highlights the struggles that women have to face to make a name in extreme sports like wrestling. I can’t wait to watch it. I would like to tell all girls that if you believe in your dreams and work hard to achieve it, success will be yours.”

Echoing the same sentiment boxer Mary Komsaid, “Its heartening to see the hardships of women especially in the field of sports being highlighted in the mainstream mass media. I am looking forward to watching this show as it appears similar to my own aspirations and struggles. I wish the entire team the very best.”

Kesari Nandan boasts of a stellar cast. Young actor, Chahat Tiwanies says the role of the Kesari – a determined young girl and a daughter of a renowned wrestler who harbors the dream of becoming a world champion. Says little Chahat, “I’m excited as well as nervous to play Kesar. Kesar is a brave girl and she inspires me to dream big.” Said Manav Gohil who plays Kesar’s father, Hanumant Singh, a former wrestling champion and the progenitor of Guru Hanumath Singh Akhahda,” I found the character of Hanumant Singh to be very challenging; both physically and emotionally. Hanumant is an accomplished wrestler who dreams that his son will take his legacy forward and win and Olympic gold in wrestling. But fate has different things in store for him.”

As Kesari sets out on her intriguing journey, she is supported by her mother, Madhavi played by actress Aastha Chowdhary. The main cast is joined by actors Nivedita Saraf, Reshma Shinde andAnkit Arora.

Will Kesari fulfil her journey from #AanganToAkhada? Watch the inspirational saga of Kesari on Kesari Nandan starting 1st January, every Monday to Friday at 8:30 p.m. on COLORS.

Sony YAY! brings in a bagful of laughter, action and adventure this Christmas
MediaInfoline Dec 22