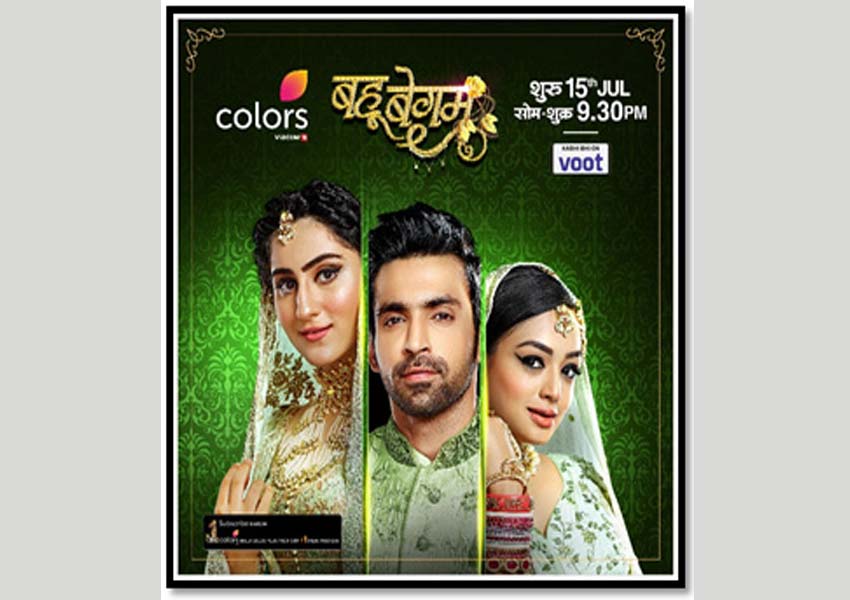 ‘Dosti ke haq bade aur mohabbat ke farz kade hote hain’! Love and friendship are the most cherished relationship, but ever wondered what happens when you are obligated to choose between the two most prized possessions of your life? Tracing the journey of three individuals Azaan, Shayra and Noor entangled in a web of love, revenge and penance will be COLORS new fiction drama, Bahu Begum. As destiny forces them to stay together in a holy matrimony, Azaan’s one decision wreaks havoc and turn their lives upside down. Produced by LSD Films, the show features Arjit Taneja as Azaan Ali Khan, Sameeksha Jaiswal as Noor, Diana Khan as Shayra Anwar, and Simone Singh as Begum Raziya. The show will premiere on Monday, 15th July and air every Monday to Friday at 9.30 pm, on COLORS.

Speaking about the launch, Nina Jaipuria, Head, Hindi Mass Entertainment and Kids TV network Viacom 18 said, “In a country traditionally so rich in culture and ideologies, it has been our endeavor at COLORS to bring alive stories from varied cultural backgrounds to the small screen. Bahu Begum’s rich backdrop and intriguing storyline coupled with an outstanding cast, will enable us to make way into our audiences’ hearts once again. With Choti Sarrdaarni, Bahu Begum and Bepanah Pyaarr, we hope to entertain viewers with variety of content through our weekday entertainment .”

Resonating with similar sentiments, Manisha Sharma, Chief Content Officer, Hindi Mass Entertainment, Viacom18 commented, “With a royal Islamic backdrop, the show recounts the journey of three individuals whose lives are entwined with one nikaah. With strong emotions like love, penance and revenge, as the core concept of the show, Bahu Begum will explore the multiple shades and rules of love and friendship.  We are delighted to have an ensemble cast of -Simone Singh, Arjit Taneja, Diana Khan and Sameeksha Jaiswal justifying their roles brilliantly. Also, we are extremely glad to begin a new partnership  with LSD productions to bring forth a show with a captivating storyline.”

Commenting further, Prateek Sharma from LSD Films said, “Bahu Begum will depict love, revenge and complexities revolving around a Nikaah. The look and feel of the show is very classy and royal and the set design is also in sync with this theme. The viewers will experience royalty white marble work, vintage artefacts, and Urdu calligraphy motifs. The dialect of the show is also very poetic and has a Nawabi touch to it. With love and friendship as the two most contrary relationships, we are sure the audience will enjoy this fascinating story.”

Simone Singh essaying the character of Raziya said –“The show portrays love and how it endures in the face of heartbreak and adversity. It’s exciting to play Bahu Begum because besides being a single mother and raising a son in a patriarchal world, she is also powerful and independent woman. I started my acting career with television and I am delighted to receive similar love and support from them even today. It’s a delight to be a part of this show and I am looking forward to a great response. “

Arjit Taneja who plays Azaan said: “I feel elated to be a part of a show that exhibits a culture which is so enigmatic and royal. This role certainly has been a learning experience as well as I had to work on my mannerisms and diction to get the accuracy. Azaan’s character endures a deep wound of abandonment and rejection and that will lead him to make a decision that will turn his life upside down.”

Diana Khan portraying Shayra’s character commented, “This is my first television outing with COLORS and I am really grateful to be working with such experienced cast. Shayra is a girl who is well-educated, a modern woman with fierce emotions. She falls head over heels in love with Azaan but fate shatters all her dreams and brings many complexities in her life.”

Sameeksha Jaiswal who plays Noor expressed, “It’s great to be associated with COLORS. This is the first time that I will be essaying an Islamic character. I am elated to play Noor, a girl who is full of life. For Noor, her best friend Azaan means everything and can go to any extent to see her best friend Azaan happy. Noor’s character is very similar to how I am in real life; chirpy, outspoken and I thoroughly enjoyed essaying it.”

Set against the ostentatious backdrop of Bhopal, the show beautifully depicts the royal Islamic vignette, culture, and meaningful symbolic rituals surrounding marriage. Begum Raziya is the matriarchal head of the most prestigious family of the city who has created her own dynasty by being at the forefront of politics and public life. A holder of the Bahu Begum title, she is respected and revered by everyone. Although Raziya very rarely displays her emotions, she immensely loves her son Azaan and her world revolves around him. On hearing about her son’s return from London, she gets thrilled and gears up to share the big news of getting his marriage fixed to his childhood friend. While Azaan always cherished his friendship with her, Noor always dreamt of becoming his begum. But as destiny would have it, Azaan returns home with the love of his life Shayra.

As Azaan gets torn between the rules of love and friendship circumstances, what will he eventually choose? Leaving the viewers with this thought, the show will definitely keep the viewers intrigued. Bahu Begum brings together a stellar cast of well-established actors whose strong portrayal of characters makes the show an enthralling proposition for viewers. Along with Arjit Taneja, Sameeksha Jaiswal, Diana Khan and Simone Singh, Bahu Begum will feature an ensemble cast of Mohammad Nazim as Azgar, Supriya Shukla as Yasmin and Amrapali Gupta as Suraiya  in pivotal characters.

Tags:
Previous Article
Boost enables young sports enthusiasts to share tips and ideas with Virat Kohli and MS Dhoni
Next Article
ALTBalaji’s next, ‘It Happened in Calcutta’ to go on floors soon

ALTBalaji’s next, ‘It Happened in Calcutta’ to go on floors soon
MediaInfoline Jul 10