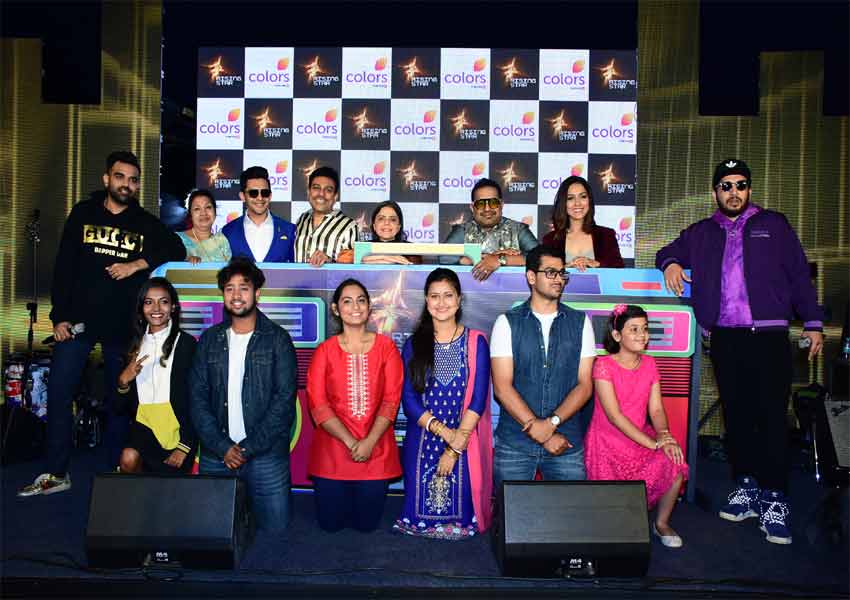 The latest season of COLORS LIVE singing reality show Rising Star reiterates the age-old truth that artistes’ stardom lies in the support of their audience and enriching their voting experience will be the VOOT App. Bringing alive India’s first LIVE interactive show on television and spearheading the hunt for India’s next Rising Star will be music maestro Shankar Mahadevan and the singing sensation Diljit Dosanjh. Joining them in this journey this season will be the singing diva Neeti Mohan who will join the panel of experts and singer-actor Aditya Narayan as the host of this season. Produced by Optimystix Pvt Ltd, Rising Star premiers on 16th March 2019 and will air every Saturday and Sundayat 9:00 p.m. on COLORS.

Speaking at the show’s launch event, Nina Elavia Jaipuria Head, Hindi Mass Entertainment and Kids TV Network, Viacom18, said, “After two successful seasons, Rising Star has established itself as India’s only LIVE interactive show on television and we are extremely pleased to be the pioneers in this space. Our campaign for this season, #JantaKaPyaar, emphasizes the power of aam junta and the fact that their support has helped talent in this country to rise above and beyond. The 9pm weekend slot on COLORS has worked tremendously well for us with a hit season of Khatron Ke Khiladi and we are sure that this season of Rising Star will resonate with the audience in a similar way.”

Manisha Sharma, Chief Content Officer, Hindi Mass Entertainment said, “Our audience have enjoyed shows like Bigg Boss and Khatron Ke Khiladi over the weekends and promising the same energy and entertainment, we are back with the third season of Rising Star for our primetime slot. We are delighted to have Shankar Mahadevan and Diljit Dosanjh back on the expert panel along with Neeti Mohan as the newest member. Brand new addition to the team will also be the host, Aditya Narayan. Back after two successful seasons, Rising Star is the only LIVE show with no fake emotions, no over produced tears and stories. The show is purely based on the talent of the singers and their journeys. It’s time for India to yet again come together and help raise the wall to find the next Rising Star. In this show your teacher, your community and even your society will all cheer for you to be a singing star.”

Producer Vipul D Shah of Optimystix Pvt Ltd, said, “The Indian audience has overwhelmed us with the love they have showered on Rising Star in the first two seasons. This time again, the wall between the contestants and the audience continues to remain the most crucial element of the show and it can only be lifted for the best singers based on live votes. Our concentration in this season is of course, the mass support of the public via live voting. It is the audience who has the power to pave the path of success and opportunities for our talented singers”.

Music Maestro, Shankar Mahadevan who is returning for the 3rd season of the show, said, “I have been mesmerised by the talent on Rising Star in the past seasons and I am sure this year too we will witness some exceptional talent. For me the focus remains on the nuances that one needs to work on to get the pulse of the song right. Also, it’s important that whichever song they choose, communicates the emotion well. I believe, contestants should also treat this as a platform to enhance their skills.”

Adding further, acclaimed singer Diljit Dosanjh, said, “The talent we witness on Rising Star has always been inspiring. It is indeed a delight to meet these extraordinary contestants from all walks to life and watch them touch lives through music. In the past two years, I’ve witnessed multiple artists get their due limelight and I am sure the line-up this year is equally promising.”

Neeti Mohan, who is joining on the panel of Rising Star said, “I have loved the format of the show from the first season. The live voting process that lifts the wall between the contestants and the audience is quite exciting as it happens real time. I feel every deserving talent should be encouraged and that’s what my role would be on the show. This is my first live reality show and I can’t wait for this journey to begin”.

Actor-Singer Aditya Narayan who will take over the reins as the host this season said, “I have hosted a fair share of reality shows but never have I been associated with a show with such a concept of live voting. It is such a privilege to work on this property and meet contestants with such unique stories and outstanding talent.”

Through an impactful marketing campaign, this year’s proposition of ‘Jab Awaaz Ko Milega Janta Ka Pyaar, Tab Uthegi Har Deewar’, will be brought alive. By collaborating with artists like Naezy, DJ Chetas, who have earned their share of fame solely because of the love and appreciation of the ‘aam janta’, we wish to celebrate the power that the viewers hold.

Aftab Singh emerges as the winner of Rising Star Season 3