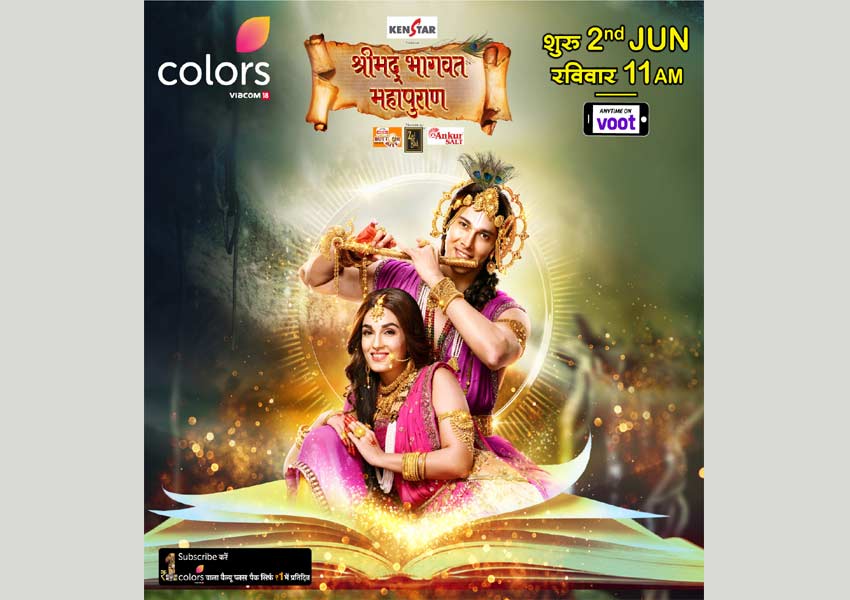 Hindu mythology is revered as a hidden treasure trove of stories that imparts knowledge and values of our culture. Time and again, our religious texts from Vedas and Puranas have influenced our life and proven to be a guiding light. These timeless narratives still bear relevance in today’s day and age for a pragmatic approach towards life. Elucidating the transcendental knowledge of the most profound spiritual literature, Bhagwat Mahapuran, with Lord Krishna (Rajniesh Duggall) and Radha (Shiny Doshi) as sutradhars will be COLORS new finite mythological series, Shrimad Bhagwat Mahapuran. Presenting new stories every week, the show will explore many cultural connections and answer questions in the divine discourse given by the Supreme Lord Krishna himself. Produced by Saffron Broadcast & Media Ltd, conceptualized by Rajkumar Dhoot, presented by Kenstar and powered by Priya Gold Biscuit, Zedd Black Agarbatti and Ankur Salt, this epic saga will premiere on 2nd June 2019 and air every Sunday at 11 am.

From finding out which is the stronger force, Karma or destiny to untangling the mystery behind whose head does Mahadev wear as the human skull ornament to comprehending why Lord Ram took Sita’s ‘Agni Pariksha’, Shrimad Bhagwat Mahapuran will unearth many fables. A collection of captivating stories from the momentous events of Indian mythology, the show will have Lord Krishna giving the famous doctrine of Bhagwat Mahapuran to Radha while answering her questions through tales with hidden meaning. With mythology and philosophy fused together, the narrative will also epitomize their eternal love.

Speaking about the show, Nina Elavia Jaipuria, Head, Hindi Mass Entertainment and Kids TV network, Viacom18, said,“Mythology is the bedrock of our culture. Stories with a mytho bent have always found a strong viewer affinity and the same has been proven time and again with various shows on television. COLORS has seen sturdy viewership on shows like Jai Shri Krishna, Karmphal Daata Shani and Mahaakali. With our latest offering Shrimad Bhagwat Mahapuran, the endeavour is to recreate the same influence and engagement with the audiences.”

She further added, “Shrimad Bhagwat Mahapuran is not only a beautifully shot show but we are attaining newer echelons of storytelling by making it immersive in its narration technique. By  slotting it at Sunday 11AM  we aim to reinvent the nostalgia of the olden days when families would come together to watch mythological shows on television.”

Speaking about the concept of the show, Manisha Sharma, Chief Content Officer, Hindi Mass Entertainment, Viacom18, said, “With Shrimad Bhagwat Mahapuran, we wish to present our viewer’s learnings from the Indian literature. This mythological series will not just appeal to the older audience but will also cater to our youth’s inquisitiveness. The grandeur and the creative storytelling, is bound to enlighten the viewers in an extremely entertaining way.”

Speaking about the association, Sunil Jain, Chief Executive Officer,  Kenstar, said, “We are delighted to team up with COLORS for Shrimad Bhagwat Mahapuran, a show that will narrate inspiring spiritual stories with Krishna and Radha at its helm. Television appeals to a large set of audiences and through this association, we wish to broaden our consumer base. The show strongly resonates with our brand purpose which is to touch the hearts of the customers through our varied range of products.”

Speaking about the concept, Nikhil Dwivedi, Co-founder and Producer, Saffron Broadcast & Media Ltd. commented,“Shrimad Bhagwat Mahapuran weaves around fascinating stories from our purans, it has answers which for over centuries have remain unanswered. The knowledge and learnings this book holds will be brought alive through our series. The show will fascinate its viewers through VFX, sets, props and incredible storytelling. With this show, we are foraying into television and we wish to bring our cinematic expertise to make Shrimad Bhagwat Mahapuran a visual spectacle.”

On being a part of the show and playing Lord Krishna, Rajniesh Duggall said, “Shrimad Bhagwat Mahapuran is drawn from the spiritual scriptures and will bring forth stories of great virtues and wisdom. As Lord Krishna, I will be seen narrating stories to Radha while elaborating various learnings from our mythology. I’ve been a believer of Lord Krishna ever since my childhood, hence this role is very close to my heart and without a doubt one of the most spectacular shows I have done on television and I am really looking forward to it.“

Shiny Doshi who will be seen as Radha, said, “My mother often told me stories from the Bhagwat Mahapuran and it gave me a lot of positivity. Shrimad Bhagwat Mahapuran will recreate the journey of Krishna on earth and how the supreme God teaches a way of life at every step to his disciple Radha. It’s an honor to be a part of a show which will enlighten the audience with many unheard stories and will bring alive the most beautiful saga from Hindu mythology.”

Shrimad Bhagawadpuran will have an answer to the unanswered questions pertaining to various events that hold relevance even today through a divine discourse given by Lord Krishna. Beautifully portraying this epic saga will be Rajneish Duggal and Shiny Doshi in the lead roles accompanied by a stellar cast comprising of  Inderneel Sengupta, Ishita Ganguly and Amit Pachori as key characters.

Produced by Saffron Broadcast & Media Ltd, conceptualized by Rajkumar Dhoot, presented by Kenstar and powered by Priya Gold Biscuit, Zedd Black Agarbatti, Ankur Salt, this epic saga will premiere on 2nd June 2019 and air every Sunday at 11 am.