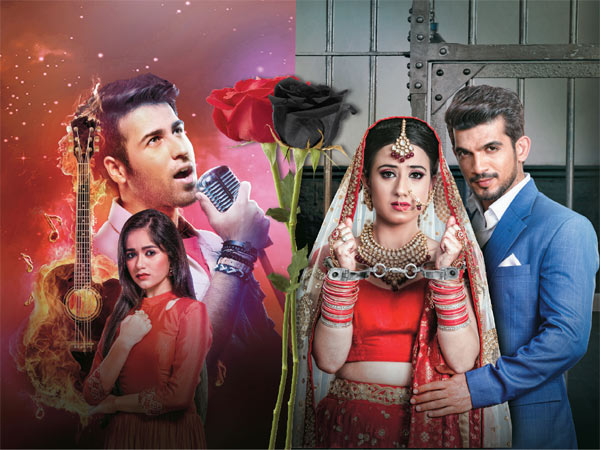 Love is unpredictable. Where on the one hand it gives a person the power to create the perfect fairytale, on the other hand it can destroy everything in its path. Love can liberate or it can perish. Putting the spotlight on bolder and edgier content, COLORS is all set to present two extreme shades of love with its upcoming dramas, Tu Aashiquii and Ishq Mein Marjawan. Moving away from conventional methods of storytelling, the shows will test all known boundaries and perceptions of love through the eyes of its protagonists. While Tu Aashiquii, a musical saga driven by selfless love, will feature actors Ritvik Arora (as Ahaan) and Jannat Zubair (as Pankti) in the lead, Ishq Mein Marjawan will be a deceptive love story with actors Arjun Bijlani (as Deep) and Aalisha Panwar (as Aarohi) essaying central roles.

Produced by Guroudev Bhalla Productions, Tu Aashiquii will air at 7:00 PM while Ishq Mein Marjawan, produced by Beyond Dreams Entertainment, will air at 7:30 PM on COLORS. Both shows will premiere back-to-back on 20th September 2017.

On bringing forth these unique concepts said Manisha Sharma, Programming Head – COLORS said, “As the early prime time viewership is on the rise, COLORS is reinventing the prime-time slot at 7PM and 7:30PM with two new edgy and youthful love stories. Set against a musical milieu, Tu Aashiqui is a story where the female protagonist, Pankti is a victim of her mother’s materialism and Ahaan, our hero wants to save her against all odds. The other show, Ishq Mein Marjawan, is a revenge drama with a biggest twist. The viewers will keep wondering who is the murderer – Deep or Arohi? We believe both these shows will add variety to the COLORS bouquet of offerings along with shows like Shakti…Ek Ehsaas Ki, Udaan and Karmphaldata Shani. The narrative of both shows are quite pacy and engaging keeping the discerning viewers in mind. With this, we are also taking one of the longest running shows on Indian television, Sasural Simar Ka to the 5:30PM time band. Bhaag Bakool Bhag, Kasam tere Pyaar Ki and Savitri Devi College and Hospital are also being shifted to the early prime band.”

With the music industry as its backdrop, Tu Aashiquii is a rebellious love story where relationships and emotions withstand the power of money. The show chronicles the lives of Pankti (Jannat Zubair), caught in a web of greed woven by her mother Anita (Gauri Pradhan). Fate brings her to the doors of an affluent Jayant Dhanrajgir (Rahil Azam), but its Ahaan’s (Ritvik Arora) love which brings her indeterminable hope. Pankti’s struggles bring a purpose in Ahaan’s life, empowering him to follow his dreams and become a great singer. Produced by Guroudev Bhalla Productions, Tu Aashiquii is a selfless musical saga of sacrifice, fame and self-inflicted failure driven by a mother’s greed. Along with Ritvik Arora and Jannat Zubair in lead roles Tu Aashiquii will feature strong character actors like Gauri Pradhan, Rahil Azam, Sachin Sharma and Himangshi Choudhary in pivotal roles.

Commenting on the show, producer Guroudev Bhalla, founder Guroudev Bhalla Productions Private Limited said, “Tu Aashiquii is a tale about two lovers, Ahaan and Pankti, who find solace in each other while everyone around them is motivated by greed and power. The show – through the lens of Ahaan questions the myopic and traditionalist views of the society, thereby highlighting the difference between being free and being liberal. We have engaged in a lot of research to create a musical extravaganza that will appeal to audiences; the varied emotions that the characters’ experience will tug at their heartstrings. Tu Aashiquii is our second project with COLORS after Udann, and we hope that we continue to strengthen our association with the channel.”

Shot extensively in the hills of Shimla and Manali, Ishq Mein Marjawan is a deceptive love story between its protagonists, Deep Raichand (Arjun Bijlani) and Aarohi Kashyap (Aalisha Panwar), built on a foundation of lies, treachery, and malevolence. While their love for each other is undeniable, it is upheld by broken dreams and betrayal. Even as Deep leaves Aarohi heartbroken and destroyed with incurable wounds, he beguiles Aarohi further with nowhere to go, except towards vengeance. Shot extensively in Shimla and Manali and produced by Beyond Dreams Entertainment, Ishq Mein Marjawan is an unconditional love story veiled by complexities, manipulations, and betrayal. Along with Arjun Bijlani and Aalisha Panwar in lead roles, the show will feature Tuhina Vohra, Mihir Mishra, Arjun Aneja and Vineet Raina as key characters.

Speaking about the show, producer Yash Patnaik of Beyond Dreams Entertainment said, “Ishq Mein Marjawan aims to showcase how betrayal is a facet of untameable love. We strive to present various untouched elements of love, and the extent of damage one can withstand for love.

Producer Mamta Patnaik further added saying, “With unpredictable twists and turns, and intrigue, we are looking forward to enrapturing viewers with a love story like none other! While this is our first association with COLORS, we hope that Ishq Mein Marjawan will be a stepping stone to a long-standing partnership.”

To promote both, Tu Aashiquii and Ishq Mein Marjawan, COLORS has devised an extensive 360-degree integrated marketing campaign incorporating different mediums and touchpoints. The channel will also promote both shows across digital and social media platforms with engaging campaigns to generate positive conversations amongst the target audience.

Experience the thrill of love on COLORS with Tu Aashiquii and Ishq Mein Marjawan , Starting 20th September 2017, every Monday to Friday at 7:00 PM and 7:30 PM respectively!