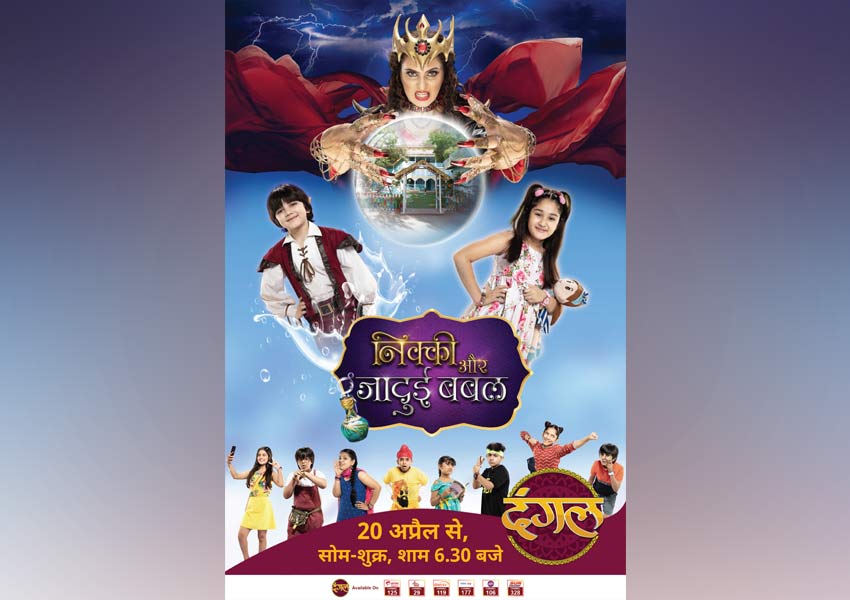 India’s leading free-to-air Hindi General Entertainment Channel, Dangal TV, is committed to entertaining viewers with differentiated content and diverse stories and it is back with yet another family entertainer and this time with a magical spark. Dangal TV now launches a fantasy show- Nikki Aur Jadui Bubble, that will take viewers on a magical journey. This showcases a story about Nikki and her quest for her missing parents along with her fun-loving magician friend ‘Bubble’ while she is orphaned. The show is going to premiere on Tuesday, 20th April 2021 at 6.30 PM and then will continue to air from Monday to Friday exclusively on Dangal TV.

Nikki Aur Jadui Bubble has been produced by Creative Eye and it will entertain viewers with its power-packed and visually appealing storytelling. The show features Tanmay Rishi as the quirky and mischievous Bubble and Maisha Dixit as Nikki Lavina Tandon as evil magician Jhanjharika, Himmanshoo Malhotra as Nikki’s magician father Shiv, Gulfam Khan, Sheetal Dabholkar and Sriniwas Kale in pivotal roles.

Nikki desires to follow in her father’s footsteps of becoming a magician someday as she is intrigued by magic, and separated from her parents. When Nikki lands up in the orphanage, she meets her secret magician friend Bubble. While continuing her quest to find her missing parents and while encountering Jhanjharika, the evil magician, Nikki sets out to become friends with the rest of the kids along with Bubble and his magic.

Speaking on continuing to invest for its viewers, Manish Singhal, Managing Director at Enterr10 Television says, “At Dangal TV, we believe it is our audience who is responsible for our success. Original content is the core of the entertainment sector and at Dangal TV, we plan to scale up our original offerings and be the go-to destination for our audience. We look forward to further strengthening our position, as we introduce another captivating original story.”

On launching a fantasy show, Prashant Bhatt, Programming Head at Dangal TV says, “Nikki Aur Jadui Bubble is truly a visual treat that will take viewers on a journey filled with the goodness of magic. The launch re-affirms our commitment to provide differentiated content that appeals to a wide range of audience. By strengthening our prime time, this new show will further deliver non-stop entertainment to our viewers. We are sure that it will go on to become a kids’ favorite and also bring families together.”

On playing Nikki, Maisha Dixit says, “This is the first time I am in a show which is all about magic. I love my character Nikki; she is strong and brave. It has taken me to magic-land which is not possible in real life. I hope all my friends and their families enjoy the show.”

Speaking on his role as Shiv, Himmanshoo Malhotra says, “When I read the script, I loved the show’s concept and I knew I had to try my hand in the fantasy genre with this one. It’s got everything from magic, adventure, entertainment and fun and is a complete family entertainer. This is the first time that I am portraying a father on-screen and I am excited to show this side of me to the audience and I hope they will love it.”

On bringing Bubble to life, Tanmay Rishi says, “My character Bubble is mischievous and always ends up in trouble. He saves and protects Nikki when other children trouble her in the orphanage. I love watching magic and adventure movies and cartoons. So, I am enjoying playing a character who can perform magic tricks and is naughty just like me.”

On portraying Jhanjharika, Lavina Tandon says, “Jhanjharika is a very powerful and proud magician who will challenge Nikki on various occasions. I’m excited on being a part of a show that has such a unique storyline that will grip viewers with each episode. What adds to my excitement is the show’s concept which is a unique combination of a magical tale and adventure from a child’s view. It is also special because there are kids in it and it reminds me of my time when I was a child artist. I am looking forward to knowing how the audience reacts to my character, especially my look.”

Dangal TV grows on the back of mythological shows

Dangal TV to entertain viewers with 1 hour episodes of ‘Ramayan’