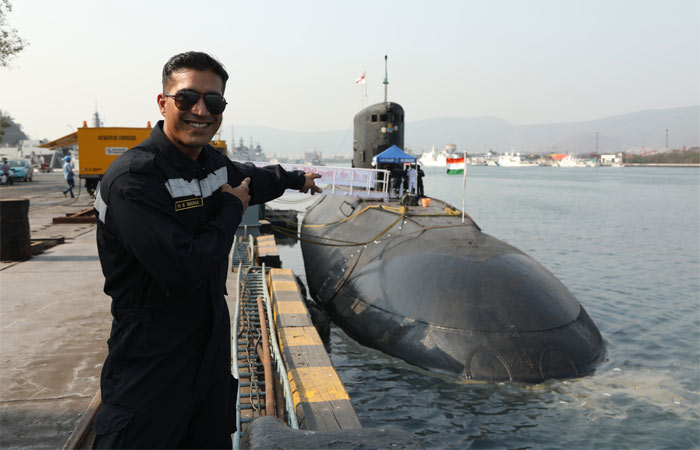 Discovery Channel, India’s leading destination for factual entertainment, is launching a special series on the Indian Submariners as a part of its extremely popular Breaking Point Franchise. This is the first time that any private broadcaster will showcase a TV series on the underwater warriors of the Indian Navy – the submarine arm which just celebrated its golden jubilee anniversary in December 2017. The special 4 part series ‘Breaking Point: The Indian Submariners’ gives the viewer a window into the world of complex, high-technology platform like the Submarines who acquire their strength from stealth in a very colloquial mannerthrough the eyes of a common man, and anchor, Harman Singha, who takes audiences into a world which has never been explored before – a journey to live the life of an Indian Submariner; from the classroom to the officers Mess through Escape Training School; to diving to the depths of the seas on board the INS Sindhukirti.

“The Indian Submarines in its chartered 50 years of existence have made important contribution to national security. The Golden Dolphins, proudly adorned by Indian Submariners, reflects our passion, devotion, sweat and toil. A successful officer gets to put it on his/her uniform but it gets imprinted on your heart”, said, Vice Admiral Srikant AVSM, Indian Navy. “The Submarine arm has largely been away from the public eyes because it operates from the depths, beneath the water,and quietly add to the nation’s security cover.  However, as we celebrate our golden jubilee of existence, we wanted to reach out to the nation and give them an insight into the life of our supremely talented officers who take grave risk to ensure that the maritime borders remain secure.  We are proud to partner with a channel like Discovery and bring forth this unique 4-part Breaking Point series on Indian Submariners. We believe this series will be an eye-opener for majority of our countrymen offering a never-seen-before insight into the life a submariner and the challenges he faces on a day to day basis.”

Zulfia Waris, Vice-President & Head, Premium & Digital Networks, Discovery Communications India, said, “We are delighted to take the Breaking Point franchise further with this special series on Indian Submariners. Over the years, we have covered various wings of Indian Armed forces but covering the Submarine had its own unique challenges. The world of Submarines is complex, it is as much about physics, calculus, chemistry and thermodynamics as it is about human skill, and machine excellence. Therefore, to make it more engaging and entertaining for the audiences, we have deployed a common man’s representative in anchor Harman Singha who lives the life of a submariners and shares the joys, the pains, the exhilaration, the satisfaction of being a submariner of Indian Navy.”

In the past, Discovery has given viewers a never seen before glimpse of the intense, grueling training programs of the Indian Armed forces through shows such as Breaking Point: Commando School Belgaum (2017), ‘India’s Paratroopers – Earning the Badge’ (2016) and ‘Revealed: National Defence Academy’ (2014). ‘Revealed Siachen’ (2016) shared the story of Siachen Glacier and the challenges faced by the Indian soldiers while on duty there.  ‘1965: India’s Battles and Heroes’ (2015) commemorated the 50th anniversary of the India-Pakistan war. Discovery’s crew traversed along with select officers of Indian Army during the Himalaya expedition for ‘Indian Army Women’s Expedition’ (2013).