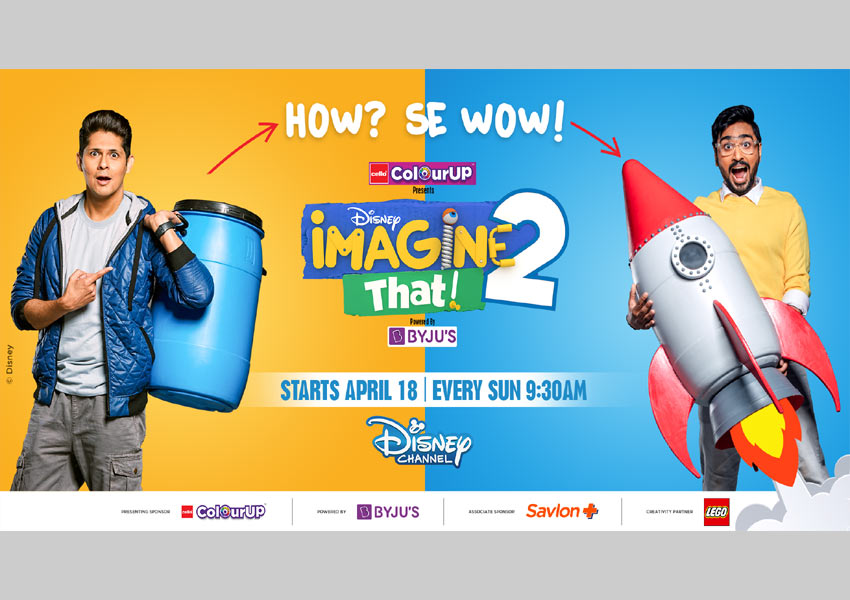 Disney Channel is all set to kick off a new season of its successful property- Imagine That, returning in a brand new avatar on April 18th. This second instalment is ringing in a fresh new format led by talented DIY artist Simran Puri and actor Vishal Malhotra and brings back Cello ColourUP as the presenting sponsor,  BYJU’S as the powered by sponsor along with ITC Savlon as associate sponsor and has bagged a creativity partner in The LEGO Group.

The first season of Imagine That inspired a growing generation of young minds which garnered an unprecedented viewership; reaching out to 12.6 million kids across all its airing. The launch episode of Imagine That Season 1 was among the top 5 highest launches in the category in 2020; and the show was sampled by more than 36 million viewers across 2+ YRS TG and 14.1 million across 22-50 YRS TG across all its airings*.

Committed to entertaining fans with content that can stimulate their creative minds, the new season will showcase different themes of art and DIY activities that will instil the importance of upcycling and utility in kids. The two hosts – Vishal and Simran will bring in a lot of energy, liveliness and fun to the show while helping shape the natural creativity and imagination in a child.

From Megatastic art installations made from recycled materials to two-minute DIY challenges and a magical mystery box that will pop up every episode, the second season promises a whole bunch of fresh new activities and challenges; reaching out to kids in a wholesome, fulfilling manner. This season will also give an opportunity to DIY experts from across India who will get to showcase their talent on the show as Supermakers.

“With our first season, we concentrated on encouraging kids to imagine, experiment and repurpose everyday items through the imaginative world of DIY and the response was truly overwhelming. This inspired us to explore a whole new format and bring in two new hosts in Vishal and Simran to make the property more engaging for kids while pushing the boundaries of their imagination and creativity. We are happy that Cello ColourUp, BYJU’S and ITC Savlon continue to believe in us and are on board this season as well and excited to have a creativity partner in The LEGO Group,” said Kevin Vaz, President & Head – Infotainment, Kids & Regional Entertainment Channels, Star & Disney India.