Experience the epic Ramayan through the voice of Luv-Kush 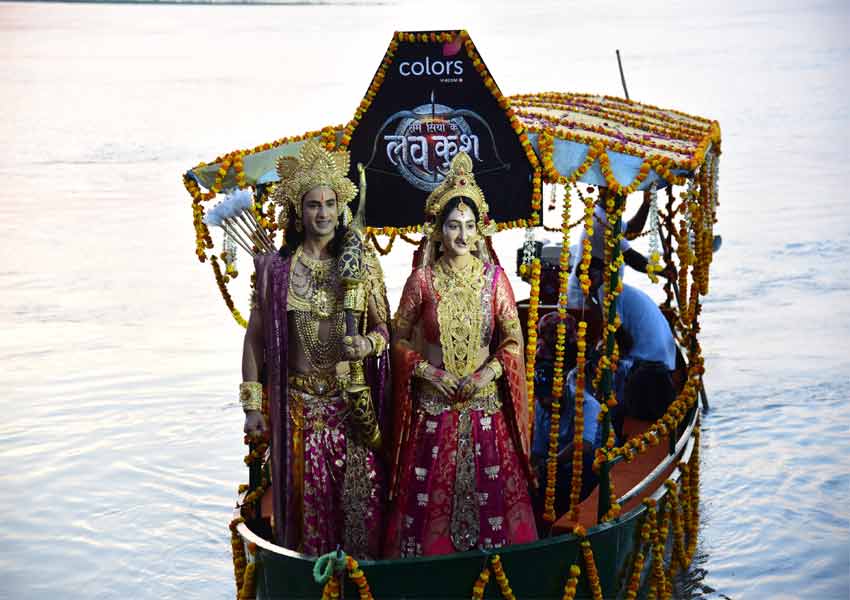 Ramayan, the revered classic, forms the bedrock of Hindu mythology and its teachings are deeply engraved in our cultural history. A tale of Lord Ram and his beloved wife Goddess Sita is rendered eternal and it encourages us to follow the path of righteousness. Narrating the virtues of Ram-Sita through the lens of their sons Luv-Kush in an artistic rendition of the sacred scripture is COLORS’ magnum opus Ram Siya Ke Luv Kush powered by India Gate Basmati Rice. The show will unearth Luv and Kush’s quest to know their father’s identity which leads them to discover the power of his name and reunite their parents for the greater good. Produced by Swastik Productions, the show will premiere on 5th August 2019 and air every Monday to Friday at 8.30 pm on COLORS.

The show dates to the magical era when Lord Ram-Sita return to Ayodhya after their fourteen years of exile while Sita is an expectant mother. Celebrations galore and they are welcomed amidst festivities, but the happiness is short-lived. Lord Ram is met with a wave of despair as he finds Ayodhya vasis questioning Sita’s morals and purity post her return from Lanka. While this baffles Ram, Sita senses his dilemma. She decides to leave Ayodhya to uphold her and every woman’s honor and Ram as a husband supports her decision. Beneath the quiet and submissive exterior of Sita, lies immeasurable power. She endures the courage to live by herself and gives birth to Luv and Kush. While they are oblivious to their lineage, they imbibe the same wisdom and compassion as their father Ram. They face adversities and overcome them like true warriors which leads them to reunite Ram-Sita, thus completing the eternal epic, Ramayan.

Commenting on the launch of the show, Nina Elavia Jaipuria, Head, Hindi Mass Entertainment & Kids TV Network, Viacom18, said, “Indian audience has a penchant for mythological shows as its appeal cuts across all age groups. The shows provide a window to witness the glorious tales through nuanced storytelling and larger than life depictions. Ram Siya Ke Luv Kush will showcase Ramayan narrated from Luv-Kush’s standpoint and how they strived to bring their parents together. It will serve as a perfect opportunity for people to reconnect with our culture and relive the timeless tales. The show is one of our biggest launches this year and we are happy to partner with Swastik Productions once again. They are known to breathe life into many mytho-centric stories including our previous offerings Karmphal Data Shani and Mahakali. We are looking at strengthening the 8.30pm timeslot with this show and thus offering variety to our viewers.”

Speaking about the sponsorship, Mr. Ayush Gupta, Business Head, KRBL said, “Indian culture and traditions are largely spun from our scriptures. These values are what makes us humble, humane, brave and intellectually sound at the same time. India Gate Basmati Rice, the largest selling basmati rice brand in India, understands these emotional threads which are woven into the social fabric of Indian society. We are proud to be associated with Ram Siya Ke Luv Kush as it puts impetus and further strengthens our belief in traditional Indian sentiments. We wish the channel and production team all the best for the success of this epic series.”

Speaking about the concept of the show, Manisha Sharma, Chief Content Officer, Hindi Mass Entertainment, Viacom18, said, “Ramayan, the eternally universal unifier, is an embodiment of our strong culture, which brings alive the virtues of faith, love, bravery, brotherhood, and sacrifice. All these factors hold significant relevance in today’s day and age and the lessons from the epic have been passed on to from generations over, through its traditional stories. Built on this key insight, Ram Siya Ke Luv Kush will highlight the part of Ramayan which puts the spotlight on Lord Ram and Goddess Sita’s sons Luv-Kush, and how they became instrumental in completing Ramayan. The show scales up in terms of detailing in every aspect including storytelling, production value, special effects, and we are hopeful that our vision turns out to be one of the biggest mythological entertainers for our viewers.”

Producer Siddharth Kumar Tewary, Swastik Productions commented, “This is the biggest and the most revered story of our country. My vision is to take our nation back to its roots. It will not just entertain the viewers but will also educate us about our values and our culture. We have made the story relevant to today’s youth as I believe it’s very important for them to understand our core. The visualization and the presentation is of the highest standards on Indian television and I am hoping that the entire family can watch this series together to understand the story of our roots, the story of our nation.”

Essaying the character of Lord Ram, Himanshu Soni said, “I have grown up listening to mythological tales and have always been mesmerized by its greatness. This is my second time of playing a godly character and I feel fortunate to be able to recreate the magic through my roles. Playing Lord Ram has been a life-changing experience as it’s tough to emulate his powerful demeanor and strength on screen. Doing justice to it was extremely critical to me as an actor. I am looking forward to associating with COLORS and I hope that the viewers appreciate our efforts.”

Portraying Goddess Sita’s character, Shivya Pathania, said, “My entire family worships Lord Ram and Sita and they were extremely happy when I broke the news of playing Sita in the show. They felt that their dream has come true through me. I have played various mythological characters in the past but playing Goddess Sita was a different experience altogether. A lot of responsibility lies on your shoulder when you essay a divine character and I wish to live up to everyone’s expectations.”

Ram Siya Ke Luv Kush is backed by high production value and the costumes, jewelry, and sets have been designed in a way that it complements the grandeur of the era.  Shiba Priya Sen from Kolkata has added elements from Kumartuli to Ram and Sita’s apparels and accessories. From special cuts of Banarasi saree, georgettes, and silk to dried seed and flowers of Santi Niketan, their look boasts of richness. Udit Narayan has sung the title track while the Halidpur brothers, Sangeet and Siddharth have composed it. Ace choreographer Rekha Chinni Prakash has aesthetically choreographed the opening dance sequence for the show.

The channel has devised an elaborate marketing and digital plan to reach out to the consumers. A key on ground highlight is COLORS Bhakti Ki Yatra, one of its kind concepts, manifested in a form of a holy structure on wheels that hosts Hologram technology to showcase Ramayana’s chapters and give Sakshat Darshan of Ram, Siya, Luv, and Kush to the devotees. A jaw-dropping dance performance by a large troupe and grand Ashwamegh structure are the paraphernalia of this Yatra. The audiences will get a chance to witness this breakthrough consumer connect drive across key market areas, colleges, townships in Uttar Pradesh. The initiative will be amplified on local radio stations, cable, digital through contests and meet and greet program. In a first of its kind partnership, the channel is set to associate with Google to enhance the experience for the audience on the digital front. It will enable them to engage with the actors through Google Assistance and share show gifs. Additionally, the channel will be creating a Ram Setu on Twitter by having a slew of influencers engaging through a single tweet and creating an illusion of a bridge on social media.

The show also features a stellar cast including Harshit Kabra as Luv, Krish Chauhan as Kush, Zuber Ali as Hanuman and Naavi Bhangu as Lakshman amongst many others.