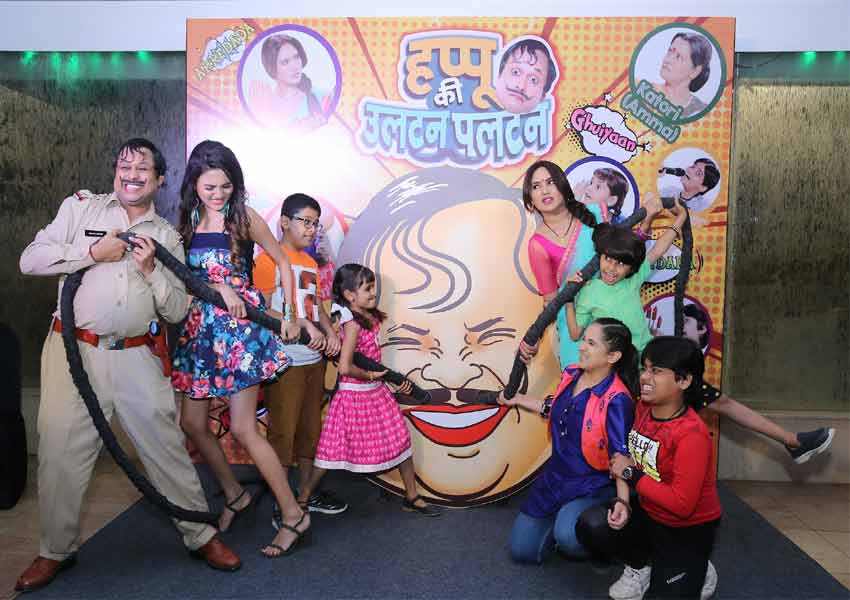 From the oil slicked hair that perfectly twirls on his forehead, to his goofy paan-stained grin that highlights his atypical moustache – the funny potbellied, corrupt Daroga Happu Singh has made viewers laugh like none other over the years. But is the sher of Modern Colony a bheegi billi at home? Answering this very question and introducing a new chapter in comedy, &TV presents Happu ki Ultan Paltan, set to premiere on 4th March 2019 every Monday to Friday at 10:00 pm.

With his ‘niyocchavar kar do’ gimmicks set aside, Happu Ki Ultan Paltan will delve into the other life of Happu at home, beyond the purview of his cop duties. His comedy misadventures and ‘gharelu’ funny tragedies will now come into play as the show narrates the escapades of Daroga Happu Singh, his ‘dabang dulhan’ Rajesh, an obstinate mother Katori Amma and his nine notorious kids. He will be caught in the ultimate tug-of-war between his mother, wife and troublesome paltan – his children. Produced by Edit II Productions, the show brings together an ensemble cast of talented artists like Yogesh Tripathi, veteran actress Himani Shivpuri, popular television actor Sharad Vyas, theatre actress Kamna Pathak amongst others.

Talking about the show, Mr. Vishnu Shankar, Head, &TV said, “With Happu Ki UltanPultan, we are happy to strengthen our weekday programming line-up with a family sitcom designed around a character that enjoys a strong nation-wide following. Happu Singh in BhabhijiGhar Par Hai gained such immense popularity that viewers were curious to know more about his other side, his life at home. We believed this provided an opportunity to present a distinct narrative. You have loved him as the Daroga, now you will see his andaaz as a family man – a husband, a son and a father. The show’s zany plots and characters will give a glimpse of a typical common man’s household routine and his daily troubles. For the viewers, the show promises to be an out an out entertainer and an escape into a laughter riot with Happu and his Paltan.”

Speaking on the show’s concept, Sanjay Kohli from Edit II Production said, “Happu Singh has been a favourite amongst viewers ever since the inception of the character in the hugely popular Bhabiji Ghar Par Hai. This huge fan following for Happu encouraged us to come up with a show revolving around his life at home and it’s sure to entertain the audience. Happu Ki Ultan Paltan will capture the hilarious situations that will take place in Happu’s home with his bindaas wife, nagging mother and his nine pesky kids, with helpless Happu in the centre of all their madness. We are positive that viewers will love this show and laugh along.”

Talking about the central character in the show, Yogesh Tripathi who playsHappu Singh said,“Happu Ki Ultan Paltan is a dream come true for me! When I started playing Happu Singh, I never imagined that I would make a special place in the hearts of the audience. Today to have an entire show pegged on Happu Singh’s character seems surreal to me and I can’t be grateful enough for such a great opportunity. I humbly thank the viewers for giving me so much love and wish that they shower more of it on Happu Ki Ultan Paltan. We hope to make them laugh through all the antics of Happu and his family.

“I urge my fans and viewers to please tune in to Happu Ki Ultan Paltan by subscribing to the Zee bouquet of channels as per the new TRAI mandate. After all, Zee is the No. 1 network for family entertainment, like a one-stop-shop with programmes of interest for every member of the family. So, to continue enjoying our show on &TV, please buy the Zee Family Pack – Hindi SD/HD today by choosing the ZEE HSM Bouquet.”

Highlighting her character in the show, Himani Shivpuri said, “I play Happu’s mother, Katori Amma in Happu Ki Ultan Paltan. When this role was brought to me, I knew it was a winner and didn’t think twice before taking it up. It is such a privilege to bring happiness to viewers and make them laugh! And to have such a wonderful team working alongside with you, adds to the fun. Katori Amma is a matriarch and a dominant personality in the family. While she makes a loving grandmother to all her nine grandchildren, she is caught in a constant banter with her daughter-in-law. The hilarious plots, humorous narrative and playful camaraderie between Katori Amma and all the other characters is sure to entertain the audience. To be a part of our new offering filled with comedy and drama, I request &TV loyalists to subscribe and purchase the Zee Family Pack.”

Sharing her experience of stepping into the genre of comedy, Kamna Pathak who plays Happu’s wife said,“Comedy has always been a genre that I have wished to explore, and I don’t think there could have been a better show than Happu Ki Ultan Paltan to begin this journey with. Unusual and unique like her name, my character Rajesh is Happu Singh’s dabbang wife who although might appear soft in her approach, is a daring woman who can take on a fight. I believe Rajesh’s character has a personality which will not just entertain audiences but also give every housewife a chance to connect with. I have a great team and hope the audiences shower their love on our show.”