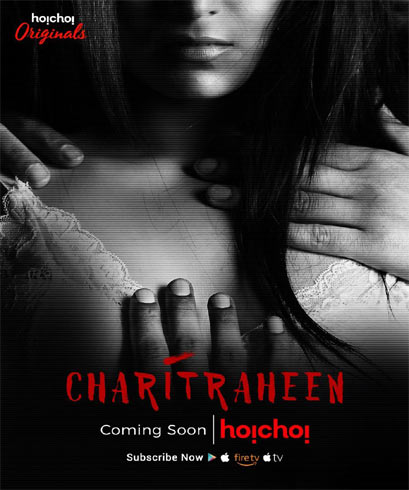 Hoichoi announced yesterday that Debaloy Bhattacharya will be directing a new Original web series called ‘Charitraheen’.
Hoichoi has recently completed 6 months since its inception, and has promised to deliver Original web series, shorts and films every month. This project is much anticipated and will be streaming around July/August.
Debaloy Bhattacharya’s Charitraheen is a take on immorality and infidelity. Set in the present time, the characters are portrayed to be characterless. As we keep guessing and judging, this series aim to take the viewers to a plane beyond all judgement.
The main cast were revealed in an interesting way, as director Debaloy Bhattacharya presented each member by flipping the pages of a book and revealing their “look” in the series. Naina Ganguly is introduced in front of the media, who will be working in the Bengali Industry for the first time and is known for her work in Bollywood. Rest of the cast includes well-known actors Gourab Chatterjee, Saurav Das and Saayoni Ghosh.
The dark tale of these few lost souls in a maze of love, lust, desire and betrayal are destined to be doomed. The journey traces these men and women as they try to come out clean. It is to see who finally gets nailed as ‘Charitraheen’ and what happens to the rest. It is an effort to categorise these characters in today’s light, to find them around us and to see ourselves in them. Down with morality and social conventions, long live suffering!
The story revolves around the couple Kiran/KIranmoyee (Naina Ganguly) and Harius/Haran (Gourab Chatterjee) and their complicated relationships with Satty/Satish (Saurav Das), Sabitri (Saayoni Ghosh) and others, who get involved in this quest for love that goes too far.