hoichoi unveils “Paap” on the eve of ‘Mahalaya’ 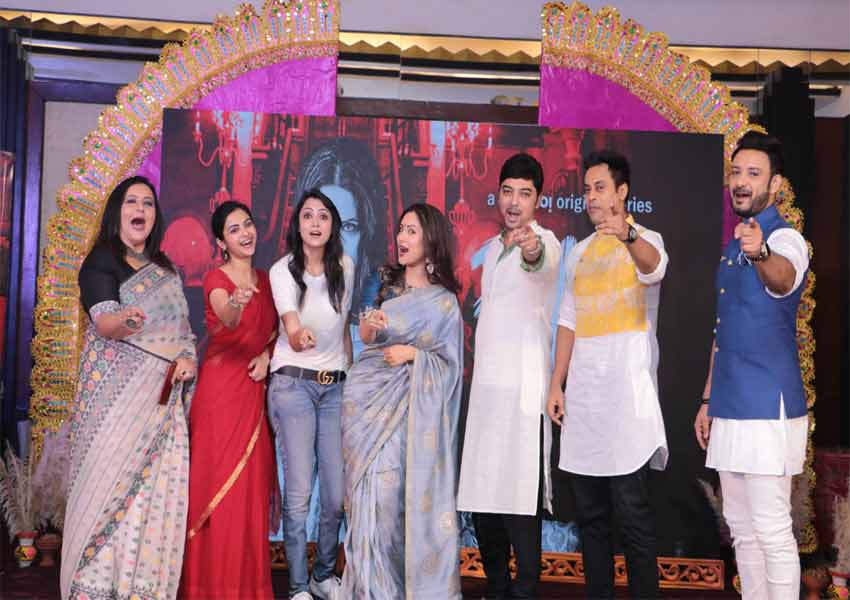 hoichoi promises a power-packed web series for Durga Puja and this year, they have brought forth ‘Paap’ (literal translation – sin) exclusviely for Puja 2019. A family drama laden with mystery, Paap stars the charismatic Puja Banerjee in the lead, marking this as her first Bengali web series.

The Official Trailer of Paap was launched today in the presence of cast members Puja Banerjee, Shaheb Bhattacherjee, Solanki Roy, Bhaswar Chatterjee, Rupsha Dasguupta, Priyanka Mondal, Indrajit Chakraborty among others, director, Anupam Hari and media professionals in an exquisite banquet in Kolkata. The banquet was set up imitating a Durga Puja pandal with “Kash Phool” (Saccharum Spontaneum), “Dhaakis” (men with a Puja specific percussion instrument), “Dhunuchi”, Conch Shells and Lights & Decor to demonstrate the feeling of being in the presence of Durga Puja festivities.

Paap is about an ancient Durga Puja celebration, a family reunion, one unwanted guest, two dead bodies, a whole lot of mystery! All this happens when a stunning woman arrives in a traditional family during Durga Puja claiming herself to be one of the family acquaintances who is here to spill some long-kept secrets. Meanwhile two dead bodies are discovered with a crushed piece of paper in their mouth and in the paper there’s a strange message. Tension arises in this family with this unwanted guest and two murders. The family gets divided on basis of mistrust and suspicion and someone from outside plays the game well. The ‘Puja House’ becomes a crime scene and lots of mysteries to unveil.

The Trailer of Paap starts off with a dead body found in a lake followed by the entry of Puja Banerjee in the house next to the lake where preparations for Durga Puja are in full swing. She claims she has returned to give back what she had for many years, authentic and auspicious golden jewellery of Goddess Durga which the family members think she had stolen. The twist in the tale comes when Puja keeps saying she doesn’t remember why she had them or from when. Another murder follows in the house for which the police get involved and they start suspecting all the family members as they appear to be dysfunctional in their mannerisms. Who is the culprit? To reveal this, Paap will be streaming from 2nd October to answer all your questions!

Excited about the trailer releasing on the eve of Mahalaya, Puja Banerjee said, “It’s such a pleasure to be doing a Durga Puja project, and with the trailer getting launched today, I feel the first day of Durga Puja (Mahalaya) will be beckoned with Goddess Durga’s blessings for us. We have worked hard for this show, so that it becomes one of hoichoi’s top watched content and I hope it yields those results after it starts streaming from 2nd October.”