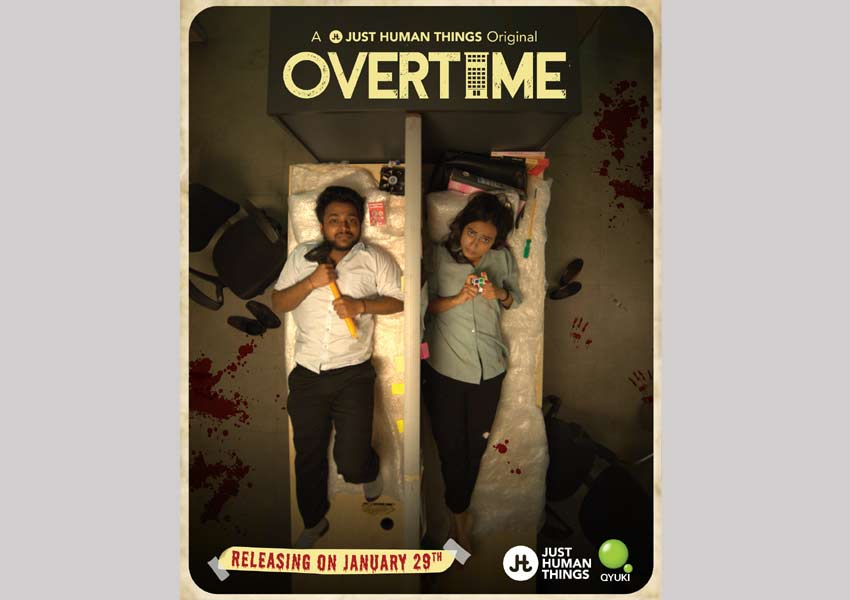 What would happen if aliens took over the world and two employees who hate each other and tired of their daily routine are stuck with each other inside their office? Just Human Things along with Qyuki presents Overtime, India’s first ever a rib-tickling tale on alien invasion and about how the end of the world can either bring unlikely people together or tear humanity apart. The five-episode series released on January 29th, 2020 and is promised to be a laugh riot! Written and directed by Ashwin Lakshmi Narayan, this horror-comedy series features Ramya Saxena – lead coder- and Manoj Bhardwaj – the intern essayed by Ronjini Chakraborty and Harsh Mayar respectively.

‘Overtime’ revolves around two IT employees who try to survive the horror of the outside world as well as survive each other. As human civilization nears it disastrous fate, Manoj, an intern and his not-so-cooperative boss Ramya are left with no option but to stay inside their office and tolerate each other. What follows are moments of humor and uncertainty as both of them explore ways to endure their encounters with mundane tasks as aliens take on planet Earth.

Speaking on the release of India’s first ever Alien Invasion Office comedy, Director Ashwin Lakshmi Narayan says, “Sid and I were thinking of doing something around aliens for a while. It was just a matter of understanding the budgets we had, the audience that only knows Jadoo as an alien, and bearing both in mind making something cool and fun. And then one fine day the idea struck. I thought that if an alien attack were to happen, I would never leave my home or space. If I were to go out into the real world, I will die, the aliens will eat me or looking at them I would surrender. As in why do all movies or shows have these people fighting these creatures. Why not make a show where they are just constantly avoiding them and at the same time dealing with problems like living without Wi-Fi, electricity, entertainment, food and so much more. Will a vegetarian become non veg to survive? Will I do drugs knowing I’m going to die tomorrow? Such things became fun to explore. In the end I think we all came together to try and make a very Indian show, with a western influence.”

Sharing his views on the show, Sidhanta Mathur, Founder, Just Human Things and Co-producer of Overtime shares, “For years I’ve wanted to see a dystopian world in India. I’m heavily inspired by what if situations and how regular people will be affected by it. The idea for an alien invasion being the backdrop is to see what I would do. What would I eat? Would I survive? I think the idea of this while scary is ridiculously funny and we have tried to achieve that balance with Overtime”.

India’s first disaster comedy, Overtime is about Alien Invasion and those people who want to survive and reinvent themselves as the world nears its end. It is about how there is always a ray of hope and a way to move forward even when humanity may not see another tomorrow.