Kota Factory releases on 16th April 2019, every Tuesday on TVFPlay 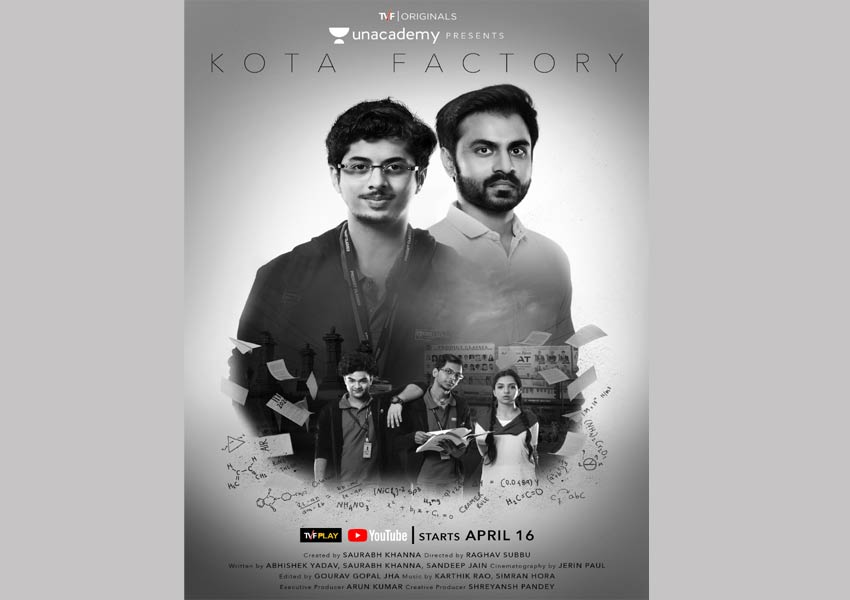 The Viral Fever (TVF) has collaborated with Unacademy for a new contemporary drama series Kota Factory that revolves around the lives of IIT Aspirants, the coaching center industry and the changes in a student’s life. Taking a step further, the series will be released in ‘Black and White’.

Jitendra Kumar who essays the role of a professor said, “There are a lot of emotions associated with Kota Factory and it’s an overwhelming experience for me. While I was studying in Kota, I would often mimic my teachers and we’d all have a good laugh. That was also actually how my acting career began. After all these years, portraying a Kota teacher just brings back all the found memories. Kota Factory is a one of its kind show that really understands the inner workings of students preparing for entrance exams and the lives they lead. I hope the audience enjoys all that this show is about to bring for them.”

Mayur More who plays the protagonist added, “Kota Factory is viewed from the lens and life of my character Vaibhav. It brings to life the various highs and lows of this stage in a student’s life. It’s a great opportunity for me to be associated with a show of this stature and I hope that audiences appreciate all the effort we have put in making this show”.

Kota Factory is a TVF Original Series directed by Raghav Subbu. The narrative explores the trials, tribulations, and everyday pressures of IIT aspirants as they prepare for the toughest exam of their life. From dealing with different coaching center professors to cheating, the temptations of vices and finding the easy way out, Kota Factory covers the A-to-Z of an IIT aspirant’s life.

Catch the drama unfold on Kota Factory only on TVFPlay and YouTube on Tuesday, 16th April.